Today’s Card of the Day features Pittsburgh Pirates pitcher WIlbur Cooper, who is the all-time franchise leader in wins. That record is probably safe for an extremely long time. He won 202 games over a 13-year stint in Pittsburgh, from 1912 until 1924, including 17+ wins in each of his last eight seasons with the team. Bob Friend is the last pitcher to approach Cooper’s mark, finishing with 191 wins with the Pirates, and he last pitched for the team 56 years ago. If you only include players who have started their career since 1965, John Candelaria is the leader with 124 wins.

Cooper was acquired by the Pirates 109 years ago today when they purchased him from Columbus of the American Association, though that purchase price ended up being multiple players sent to Columbus. We have posted just one previous article for Cooper in this series, showing him on his 1920 W516 card. That card was a strip card and included a crudely drawn picture of Cooper, along with an error version of that same card. Today’s Card of the Day comes from the 1922 Exhibits set and it’s a real picture card, giving you a better look at this all-time Pirates great. 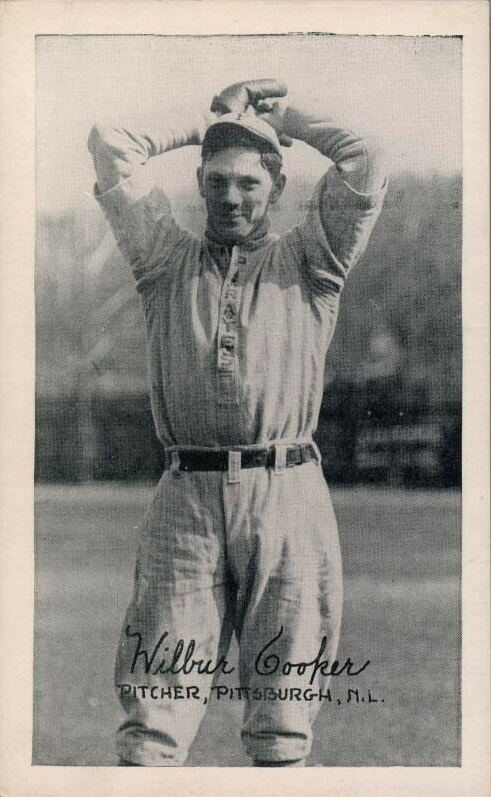 This card just might be a record for an active player. This set came out in 1922. That uniform Cooper is wearing is the 1912 Pirates home uniform. As mentioned above, he barely wore that uniform, joining the Pirates via trade on August 25, 1912, though he reported to the team the very next day, so he was there about six weeks before the season ended and he pitched 38 innings. The uniform year is easy to tell because it’s the only season that the Pirates wore jerseys with “Pirates” written down the middle front. The white hat with a dark “P” logo tells you that it’s the home jersey. So basically, the card manufacturer here used a photo that was ten years old on this card and I guess they hoped no one would notice 99 years later and call them out on it.

Exhibits cards were sold as penny arcade cards back in 1922 and they were bigger than the standard cards of the day, which were usually smaller than the standard card size of today. The 1922 Exhibits measured 3 3/8″ x 5 3/8″. These cards were produced by the Exhibit Supply Company of Chicago. They put out their first set in 1921 and continued producing cards into 1966. There were 74 cards in the set in 1922, and one of the most popular ones was covered here, featuring Moses Chief Yellow Horse, who is the first full-blooded American Indian (Pawnee) to play Major League Baseball. His cards go for $1,000+, which is a nice investment return on that penny.

This particular scan came from a card graded PSA 4 and the asking price is $135 on Ebay. There’s an ungraded one for $85 and it looks to be about VG grade. There’s also another for $160 price tag, with a best offer option. It seems to be the nicest of the trio. For reference, a low grade one with a crease and a marking, ended recently for $18 delivered in an auction-style listing. So the three listed are probably a little overpriced in comparison, but your only other option is wait for one to pop up as an auction listing instead of a straight buy-it-now listing.