Like many of you I’m sure, I was recently watching the Field of Dreams game. While trying to figure out a Card of the Day subject for today, I decided to use a Pittsburgh Pirates card from 1919. That’s the year that the Chicago White Sox threw the World Series, which got all of the players involved in the fix banned from baseball. Those would be the same eight players who showed up out of the corn fields in the early parts of the movie. Here’s an interesting fact about 1919 baseball cards….there aren’t many choices. I’ve already featured one card from that year here when I covered former player-turned-Hall of Fame manager, Billy Southworth. Today’s Card of the Day subject comes from the same set as the Southworth card, and it’s also a player who eventually entered the Hall of Fame due to his managerial career. Before he took over the New York Yankees and led them to seven World Series titles, Casey Stengel was an outfielder for the 1918-19 Pirates. It’s tough to find a photo of Stengel with the Pirates and this card only sort of helps. 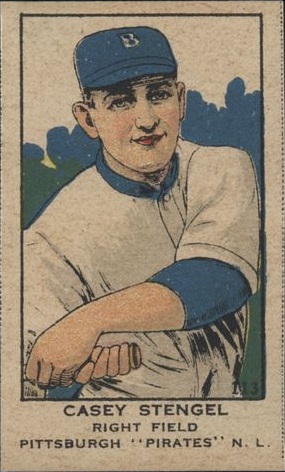 We have featured at least four cards here that show players on one team, but the cards lists the team as the Pirates. The 1981 Donruss card of Bob Owchinko clearly shows him on the Cleveland Indians. The 2006 Topps card of Damaso Marte has him on the Chicago White Sox. The 1939 Play Ball card of Hall of Famer Chuck Klein has him on the Phillies on front and the Pirates on back. Hall of Famer Jake Beckley’s Old Judge card shows him on his minor league team from 1888, the St Louis Whites. This card with Stengel is at least the fifth card to feature a different team’s uniform on a Pirates card. Before he joined the Pirates, he was with the Brooklyn Robins (Dodgers).

Stengel was not the ideal role model player for baseball owners. He was constantly holding out for more money or threatening not to play. That’s one of the reasons that he played for five different teams during his career, and he has some partial seasons during that time. He was a very good player, but no superstar. If they had an All-Star game during his era, he probably would have made 3-4 appearances over his 14-year career. In his two seasons with the Pirates, one cut short by WWII, he batted .280 in 128 games, with 55 RBIs, 56 runs scored and 51 walks.

This card was issued after he already had a full season in with the Pirates, so they had time to adjust the colors to fit the team, especially since these are strip cards and not real photos. The Old Judge set mentioned above actually did some 19th century airbrushing to real photos if a player changed teams, so it wouldn’t have been hard to turn a crude drawing into a different team, especially for a guy who was traded to that new team a year earlier. However, the strip card manufacturers went with the Brooklyn theme here anyway, despite the fact that they were doing the drawings off of black & white photos. As with the other cards listed above, the part that makes this a Pirates card is the team name listed on the card, noting that “Pirates” was listed in quotation marks because team names were merely nicknames back in the early days of baseball and not official names.

This card is tough to find, but not impossible. Ebay has one sold auction on a card that was badly cut for $71 delivered. There’s one active auction, with a card that is also miscut, but that one has a $499 price tag. It has a best offer option, but even a 50% cut in price wouldn’t be enough. Maybe you’re impatient and really want the card, so I can’t say don’t go for it, but I’d wait for an auction style listing to come up, either on Ebay or one of the many auction houses.