Yesterday was the birth date of Pittsburgh Pirates pitcher Howie Camnitz. I had a Card of the Day already picked out yesterday before I looked at the daily history article, so I said to myself that I need to get Camnitz into a Card of the Day article soon. He is one of the better pitcher in team history and deserves the recognition. His only Card of the Day article so far was posted on his birthday last year, when I looked at his 1912 T207 card. If you read today’s history article, you know that Camnitz got a mention again. This time it was for his shortened no-hitter (more on that in the history link), so I figured why not include him today, especially since MLB tried to wipe his no-hitter off of the books. I have my own history site for the Pirates, so I’m not going to let that happen. Here’s a look at one of the best looking cards from any era, the 1911 T3 Turkey Red Howie Camnitz. 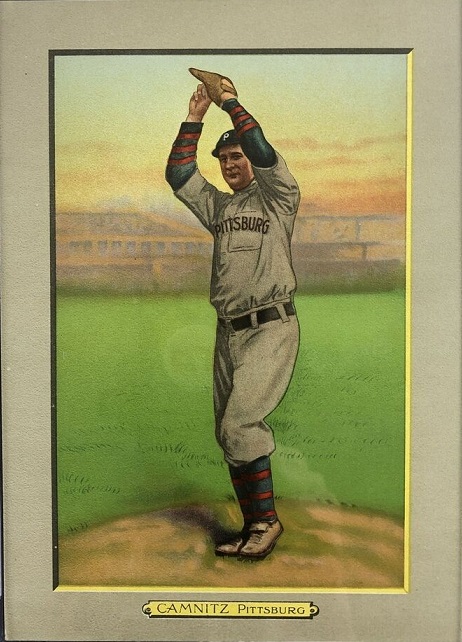 A scan of a Turkey Red card doesn’t do them any justice.  They are called “cabinet cards” due to their size. The designs are comparable to the T206 cards that were printed just before this set came out. The big difference is that T206 cards measure approximately 1.4″ x 2.6″, while the Turkey Reds measure 5-3/4” x 8” and come with a much thicker card stock. The T206 set had many brands of cigarette/tobacco ads on the backs, while the Turkey Red name comes from a brand not found in the T206 set.

A cropped version of this photo is in the T206 set, showing him from the waist up, so the Turkey Red offers you a full view of the 1909 team uniform. I’ll note that baseball card sets back then often added an identifier for the teams onto their uniforms. The Pirates uniform at this time didn’t have “Pittsburg” across the front, which was the correct spelling of the city at the time. The angle of this pose hides the iconic “PBC” interlocking logo on his left sleeve, which is visible on one of his other two T206 poses. Camnitz was good enough at this time to get three cards in the T206 set. For comparison, Hall of Famer Fred Clarke had two poses. 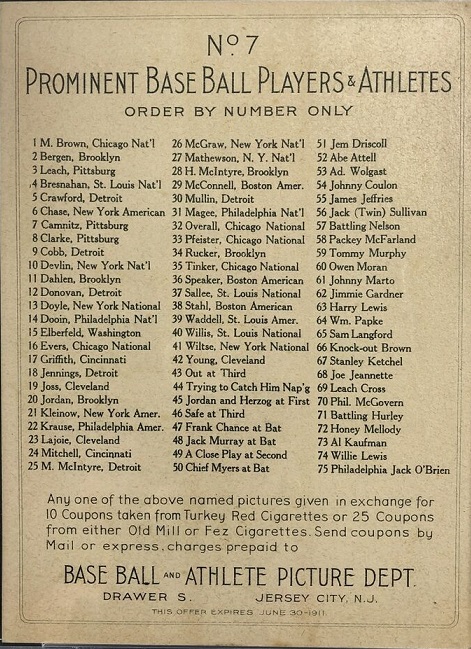 The back provides a checklist of the cards available in the set and how you can acquire them via coupons collected and set in. This set is recognized as a 1911 set, but that expiration date for the offer is only June 30th, so if the were first released in 1911, then collectors weren’t getting much time to take advantage of the offer.

The checklist here contains 50 baseball cards, with another 50 later added to the set. You’ll also notice that the final 25 names on the list fall under the category of athletes. Baseball was by far the most popular spot of the day in the U.S., so they dominated this set of cards. That brings up an interesting part about how these cards were later cataloged. As I have mentioned numerous times in the past, all of the set names from back then were thought of after the fact and then cataloged to make it easier for collectors. Any card set that started with “T”, such as T3 and T206, meant that they were released with tobacco products, and then the numbering systems was fairly random. When this particular set was cataloged, it was split into baseball players (T3) and athletes (T9). The odd thing about the “athletes” category on this checklist is that all of them are boxers, so it’s basically a baseball/boxers set. They only ended up producing one more athlete/boxer in the second series and it was a pretty famous one, Jack Johnson.

If you’re interested in buying one of the Camnitz cards, realize that Turkey Red cards are all pricey for the average collector. An auction for a low grade copy with pencil marks on the checklist on back recently ended for $134. A low grade one is on Ebay right now for $270. The scan above came from one grade PSA 4.5 and the asking price is $1,480, which is a very high price. Only four T3 cards have ended for higher prices in the last three months. Two were Walter Johnson and two were Christy Mathewson. Camnitz was a great pitcher for a time, but he’s not in the company of Johnson or Mathewson. That’s nothing against Camnitz, because very few pitchers in baseball history should be mentioned in the same sentence as those two giants of the game.