Collectors often love investing early. So when the card companies tried to get a jump on the next great rookie card by including cards of recent draft pick, you were often betting early on a player eventually reaching their potential. That’s a little safer with college players because they have more of a track record and they’re closer to the majors, but when you’re talking about high school players, you’re really taking a chance. One of those big chances that many Pittsburgh Pirates collectors took in 1993 was investing in a high school catcher from California was taken 23rd overall in the first round of the 1992 draft. That year the Pirates hit big on the selection of Jason Kendall. Topps included a card of the young backstop, who didn’t turn 18 years old until weeks after the draft. Here’s a look at that card. 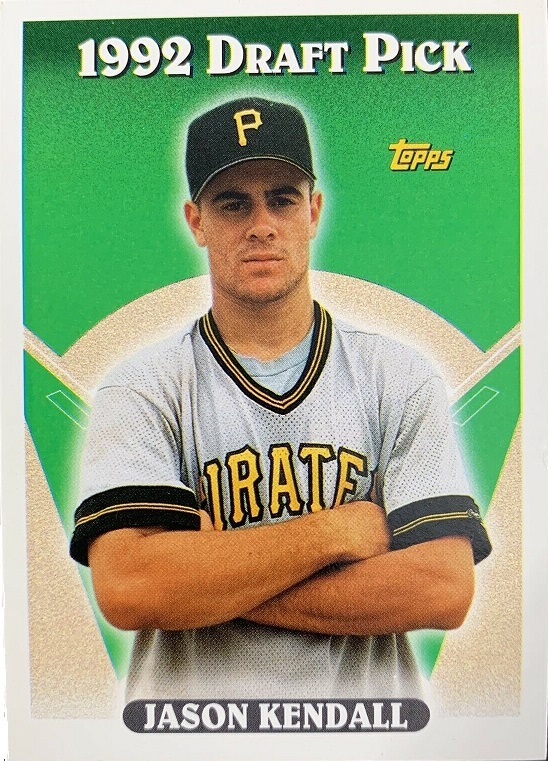 The first thing I noticed is that Jason Kendall doesn’t look too happy to be drafted by a team in the middle of their third straight National League East title season. You could say that maybe he could foresee a long losing streak at the time because we all knew Barry Bonds would be gone after 1992, but if he could see that far into the future then he should have been pretty happy about that six-year/$60 M contract that was coming up. Of course there was that whole gruesome injury at first base thing too, so it should have been more of a slightly optimistic/things could be worse look. I must say that I thought the design for the draft pick cards in this set was a rather weak one. Just a generic drawing of a baseball field like a 1980s video game. Topps also had a coming attractions card for prospects that was also a bad generic background like it came from an original Nintendo game. 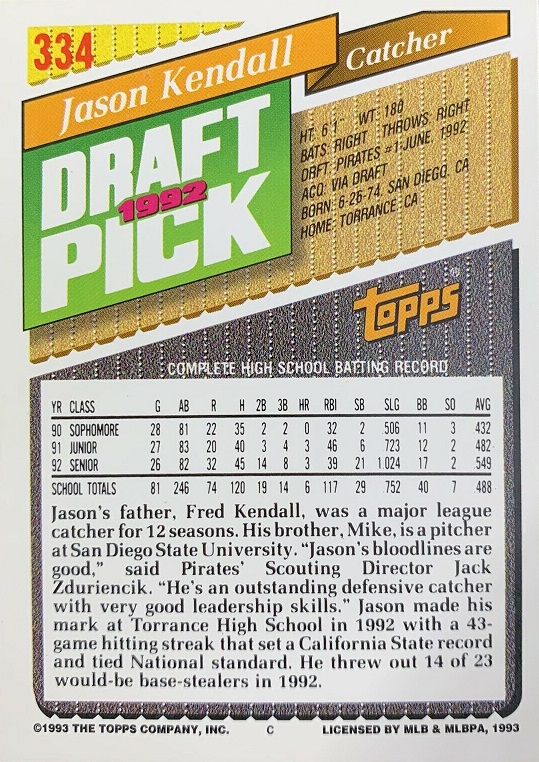 The backs of 1993 Topps cards are great looking in my opinion. They’re easy to read, they have a nice colorful design, even though I have no idea exactly what they going for with the design. Sometimes shapes and colors just look good, especially if they don’t take away from the meat and potatoes of the back. It’s definitely not generic like the front here. I like the quote here from the Pirates Scouting Director. That’s a nice touch, adding a scouting report so collectors/fans can see why the team chose that player in the draft. Kendall was a really good player as a sophomore, as the stats show, so he was probably getting attention from scouts at a very young age.

If you’re interested in this card, it’s an easy one to find on Ebay. Kendall obviously had a strong career, but he fell short of the Hall of Fame standards, so his cards will never have high values, especially since they produced a ton of these cards. Those early collectors probably had their best chance to sell his cards either after his rookie season, or after his third All-Star season in 2000 when it looked like he had a shot at a Hall of Fame career. He compiled 19.9 WAR by age 26, but those next ten years saw him post a 21.8 WAR, which isn’t bad obviously, but that was the end of his career. His rookie cards can now be had for about $2 delivered, which numerous choices in that range. In fact, there were just under 200 active auctions for this card when I typed up the article. One of the more interesting options is a Gem Mint PSA 10, which has a $33.99 price tag. That doesn’t seem bad, but one just recently ended for $14.50 in the same grade.