Today’s Card of the Day features two firsts in one article. This is the first time that we have included Pittsburgh Pirates third baseman Bobby Byrne in this series. It’s also the first time that we have included the 1911 M116 Sporting Life set here. If you don’t know who Byrne is, then you’re in the right place. As a Pirates fan who stumbled upon a history site for the team, you should know the name. He played five seasons in Pittsburgh and was part of two significant trades, both of which have been covered in our This Date in Pittsburgh Pirates History articles over the last two days. He was the key in-season acquisition for the 1909 World Series winning team, which would make him the Bill Madlock of his time, especially since they both played third base. Byrne wasn’t much of a hitter before joining the Pirates, but then in 1910 he led the league in both hits and doubles. When these Sporting Life cards came out in 1911, Byrne hit 17 triples and scored 96 runs, while leading all National League third basemen in assists. In 1912, he led NL third basemen in fielding percentage. Basically, he was a significant player during his days in Pittsburgh.

The 1911 M116 Sporting Life set is not one of my favorites from the era, which is probably why I haven’t featured it here yet. A quick lesson on the name of the set. The M116 part is just a catalog number created long after this set was put out. The “M” part is for cards that were issued with magazines, and the “116” part was just randomly picked by the person (Jefferson Burdick) who painstakingly set up the system. The Sporting Life was a weekly magazine put out during this time, which covered sports like no one else at the time. I’ve used back issues for my research here numerous times. They sometimes printed minor details that the local papers missed or just didn’t feel was necessary. I’ll get into the reason this set isn’t one of my favorites below the front photo, so let’s get into the card itself. Here’s the 1911 M116 Sporting Life Bobby Byrne. 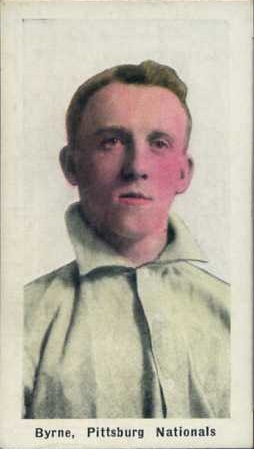 As you can see, this set had a rather basic design. It has white borders and black lettering at the bottom, nothing else. That’s not why I don’t like it. The iconic T206 set has the same exact plain setup and it’s one of my top five sets all-time. I am personally not a fan of portrait style poses, especially when the players aren’t wearing caps. You know Bobby Byrne is a baseball player because I told you already, or you just knew it before reading this article. Now look at that picture and tell me you would know that was a baseball player if all you saw was the photo?

The entire M116 set has the same look throughout. Add in the dull color background and the pastel colors added to the photo, and the look is very unappealing to me. I have two of these cards in my collection. One was bought as a type card, just so I had an example from this set. That one was long-time Cleveland third baseman Bill Bradley. Not long after I got that card, I bought a Dots Miller card. If I bought the Miller card first, I’d have one card from this set, nothing against Bradley. 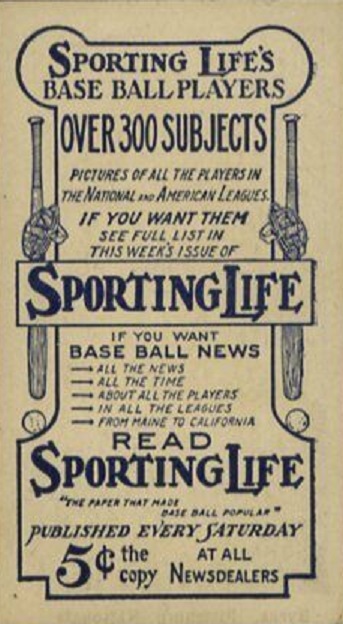 The back is basically just an ad for the Sporting Life, “The paper that made base ball popular”. It had a bit of a design with the bats, balls and catcher masks, but otherwise they were just delivering advertisements into the hands of collectors. Despite that fact, the back has nice eye appeal, even if they squeezed as much information as they could onto a small back. These cards measured 1½” by 2¾”, so imagine trying to read that small print on something smaller than that scan you’re seeing.

If you’re interested in this card, and I know that there are plenty of collectors of this set out there, then you’ll be happy to know that it’s relatively easy to find for its age, but the price might make you unhappy. All four examples of this card currently on Ebay are considered to be high grade, ranging from a PSA 6 to an SGC 88 (equal to a PSA 8). The price ranges from $150 to $295, which honestly isn’t bad compared to prices for an SGC 88 from other sets in that era. There are no sold copies of this card on Ebay over the last three months, so I looked at other commons and they can end for as low as $20 each, but that is a bit low to expect. An ungraded Chief Wilson finished for about $30, which is the lowest price for a Pirates player among recent Ebay sales.