Today’s Card of the Day subject is long overdue. I mean that in two ways. This series has been going on for 17 months and this is the first card of Gary Redus. Any key player who was a member of all three of the 1990-92 National League East championship clubs should have been in this series by now. Including Redus today doesn’t even complete that group, so expect another 1990-92 player soon. The bigger oversight in my opinion is the 1989 Upper Deck set not being here yet. That set was a game changer in the industry, yet I’ve somehow overlooked it until now. I included Redus today because the Pittsburgh Pirates acquired him on this date in 1988. Here’s card #419 from that first set issued by Upper Deck, Pirates OF/1B Gary Redus. 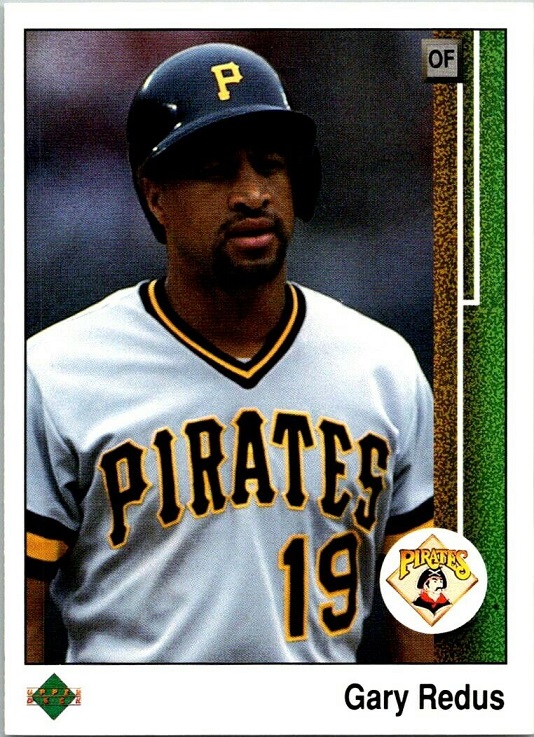 These cards were completely different than anything before and it caused the other companies to step up their game. When Score came out with their 1988 set, the better photo quality made it a popular choice, and that’s something that they touted on their boxes. They may have helped the changes along, but Upper Deck cards were pretty much in the works already and they gave a sneak peek with promo cards that were specially released long before the set came out. Those promo cards caught on quickly, so when Upper Deck cards came out in 1989, everyone wanted to get packs. The cards cost more than everything else, they came in special foil packs, and they had little hologram stickers so you knew that they were originals. The picture quality was better and the quality of the card material itself was better. The Score set was a small step for the industry. Upper Deck took a giant leap and everyone else had to work to catch up.

You get a nice shot here of Redus in the home whites, along with the Pirates logo included on the front of the card, which adds some brownie points to a card that was already considered a strong offering. 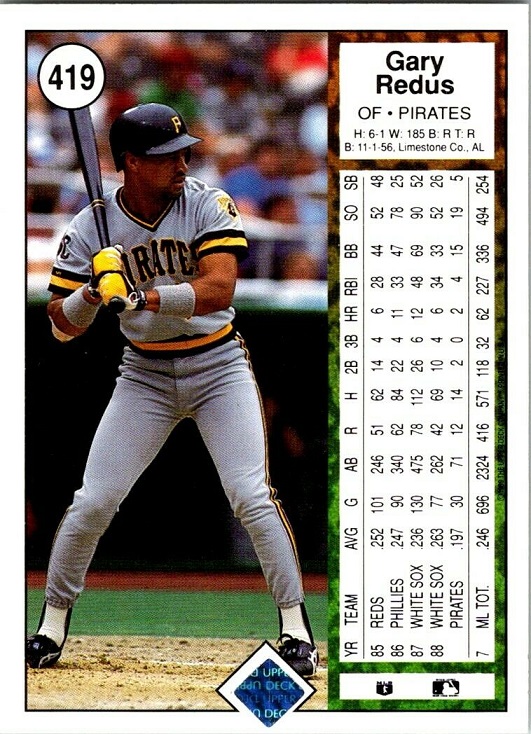 The back added a second quality photo, and you get a full shot of the road grays. The only downside to the added photo is that you sacrifice some of the career stats. They only had room for five seasons, or in the case of Redus, four seasons. That’s because he split the 1988 season between the Chicago White Sox and the Pirates. I’m a little torn with these backs because I am not a fan of the stats here being sideways and lacking all of the big league years, but those second photos that Upper Deck added were so good, and different for the time in 1989.

Two small things here. You see the aforementioned hologram in the bottom middle, which was on every card. Reprinting cards because a big thing back then and this was a way to stop to combat that from happening. The other thing is the background behind the stats. I’ve never been able to figure out what they were going for with the design. It’s something you don’t notice until you do notice it, then it stands out. You can see that they used the same design on the front, which appears to be grass changing into dirt, with the fair/foul line chalk in the middle. There it makes sense and looks good in my opinion. On the back it just looks like green turning into brown, with lighter color blotches throughout. It doesn’t even closely resemble grass changing into dirt. Just a strange look to me, and why would you (sort of) repeat something from the front? It doesn’t really take away from the look of the card, just me wondering aloud what they were going for with the look.

This card is relatively easy to find on Ebay as you might expect, and the set is far from as popular as it was when first released. A lot of people were disenchanted with cards from this era because people started investing more in cards and companies overprinted everything, so there’s a lot of them out there and that has kept the value down. Ebay has 48 auctions for this card up right now, so you have plenty of choices in the $2 range, which includes delivery. The only real cards of note in that group are the two autograph copies and one is much nicer than the other due to the marker used to sign it. The nicer one is priced accordingly ($20 delivered), while the other is $10.