You woke up today and already knew who the Card of the Day subject would be, didn’t you? I couldn’t disappoint, even with another Hall of Famer for the Pittsburgh Pirates born on this date (I’ll get to Burleigh Grimes soon in an article, I promise). However, today we celebrate the Great One. Roberto Clemente was born on this date in 1934 in Carolina, Puerto Rico. He spent his entire 18-year career with the Pirates, debuting in 1955 when Topps featured him on a rookie card that is hugely popular now. We have posted articles about  many of his cards already, including his rookie, his 1956 card (my favorite), his final card from his playing days, and even a few produced after his career was over. Just search “Clemente” on our Card of the Day main page to see all of the articles.

I wanted to go with something a little different today, but still from his playing days. So I scrolled through Ebay until this particular card caught my eye. We haven’t looked at the 1970 Topps Super set yet, so what better place to start than with Clemente on his birthday. 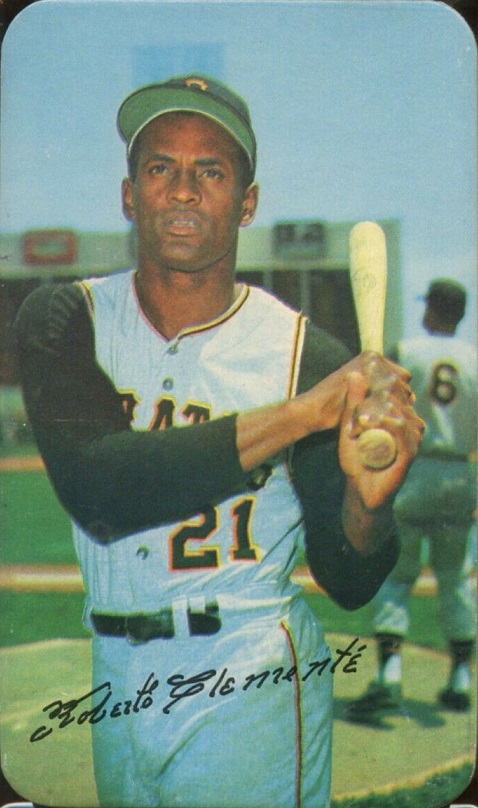 These Super cards were larger than the regular issue cards by a lot. The 42-card set consisted of cards that measured 3 1/8” by 5 ¼”. That’s compared to the standard card size we are all used to, which is 2-1/2″ by 3-1/2″. Topps used posed action photos back in the day and the player was usually looking off in the distance, instead of directly at the camera. Clemente’s card here fits that bill. Even with the background visible, you would know this isn’t a real follow through swing, but it still looks great anyway. The uniforms from the era are among my favorites. The autograph here differs from autographs you’ll find from him. Topps got player signatures on their first card contracts and then reused them over and over whenever they used the facsimile autographs on cards, so sometimes the early autograph doesn’t match the older autographs.

Someone please tell me what some things in the background came out as blue on these old cards. In this photo it’s the lights above the stadium (right above Clemente’s hat), but it’s trees in other photos and just background things in general. Did Topps airbrush them, or is it something with old photos? I’ve seen it a lot more now doing these card articles and probably didn’t notice it before. 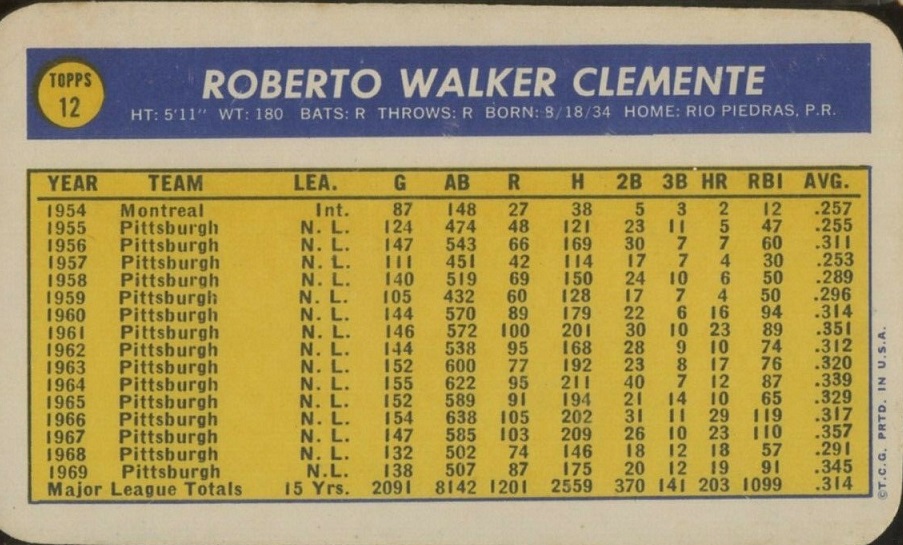 The back is similar to the regular issue 1970 Topps card. Same color and setup for Clemente. The players with shorter careers had a cartoon on their 1970 Topps card and some added bio info, while veterans like Clemente didn’t have room for that due to all of the lines of stats. However, his 1970 Topps regular card did have a line of information about how close he came to winning his fifth batting title in 1969 (it was three points). The other difference from the regular Topps card is how they list the bio info under his name. Everything is written out on the 1970 Topps card and it covers two lines. Here, everything is short-hand and it’s on one line. I like that they gave all of the stats for the players. Clemente only had one year of minor league ball, but they got all of the years for other players from the start of their pro career.

If you’re interested in this card, you have various options on Ebay, both graded and ungraded. There’s a PSA 8, but the asking price is $790. You can go down to a PSA 5 and two of those are listed, one for $275 and one for $270, though the higher priced one has a make offer option. There are 16 others currently listed that range from a low of $40, to a high of $180. As for completed auctions so you have a better idea of what they go for normally, a PSA 9 sold for $1,125! Makes that PSA 8 I mentioned seem reasonable, however a PSA 8 recently ended for $295 in an auction listing (not a buy-it-now). A PSA 6 sold for $128, and auction listings have ended under $20 three times, though condition played a part in those prices. This is a rare card in that there are more closed auctions than current ones. That shows you how popular this card is, and really how popular any card is from Clemente.