Today’s Pittsburgh Pirates Card of the Day is just our second one from the 1949 Bowman set. The first one featured Pirates pitching great Rip Sewell. That card had his nickname written out on the front. Today’s card has the nicknames on the back. I say nickname in plural because Ernie Bonham had two nicknames, one that made sense and one that was in jest. He is most known now by the name “Tiny” and he was far from that description, which is how he also got the nickname “Jumbo”. He was listed as being 6’2″, 215 pounds, which was big for his day, but not that big compared to his teammates. For example, the 1949 team had three taller players and five others who were also 6’2″, giving them eight players total who were his height or bigger. The nickname didn’t refer to his height, and they weren’t poking fun at his weight either. He was actually a very strong man, who had some heavy-lifting jobs before making the majors. That strong man was born 108 years ago today, so now is a good time to take a look at the 1949 Bowman card of Tiny Bonham. 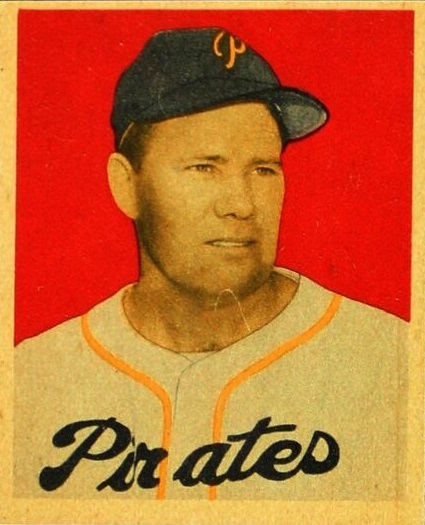 These 1949 Bowman cards used colorized photos, with solid backgrounds. The Rip Sewell card linked above happens to be a red background as well, but the background colors could be orange, green, blue, yellow/gold, with different shades for each color. Bonham is shown here in the 1947 home uniform, though the colors are wrong. The Pirates went with blue in their uniform for the final time in 1947, so the Pirates part, the stripes and the hat color should all be blue, with the “P” on the hat being white. In 1948 they started using the black & gold that you are used to now. They also switched to the block letter style instead of the script writing, which is how you can tell that it isn’t from 1948. Bonham only played for the 1947-49 Pirates, so it makes it easy to figure out the year. As for telling it is the home jersey, that’s because the team wore “Pirates” at home and “Pittsburgh” on the road that year.

I mentioned that the Rip Sewell card had his nickname on the front. As you can tell above, there’s no name on the front here. Bowman switched up between names on the back and names on the front around the midway point of the 240-card set. Not all of the cards were printed at the same time, so they made some changes mid-printing. 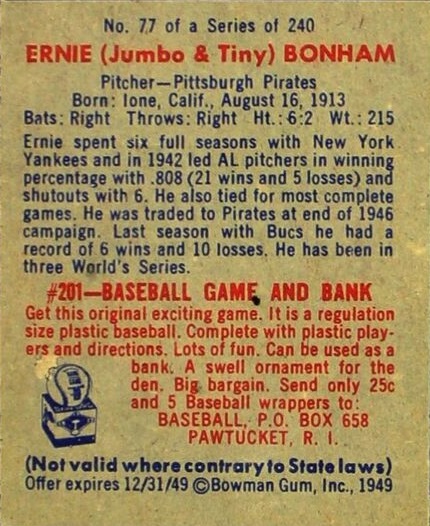 There are the nicknames right at the top, and they were used separately. I don’t believe anyone ever called him “Tiny & Jumbo”. As you can see, there are no stats here, but the bio section describes some of his career highlights, mostly from his time with the New York Yankees. Bowman took up a lot of room on the back advertising a Baseball Game and Bank, an original exciting game, that is lots of fun and could be a swell ornament for the den. The price was a big bargain as well! As long as you didn’t live in a state that prohibited having swell ornaments in your den. Hurry up though, the offer expires on New Year’s Eve.

This card is not plentiful, but you can find different prices ranges on Ebay. Right now there are nine auctions up and they range from $19 for a low grade copy, up to $170 for a PSA 8. This particular scan came from a PSA 6 that is going for $80. Most of the others are around the $25 range. You’re better off waiting for auctions (as opposed to buy-it-now listings) if you’re not impatient or not flushed with cash. A PSA 8 ended recently for $57, and numerous copies have ended under $10 delivered in low grade. Whatever you choose, happy collecting.