Today’s Pittsburgh Pirates Card of the Day features Oliver Perez, the eccentric lefty, who had a huge first full season with the Pirates and hasn’t approached those numbers since, but he has carved out a 19-year career in the majors. Perez turns 40 years old today and he’s pitching in Mexico, after playing for the Cleveland Indians in April.This card comes from a 2006 set put out by the Upper Deck company. It’s called a Sweet Spot Signatures card and it comes from the Glove Leather subset. It’s a rare card and it’s numbered and authenticated, so you know exactly what you’re getting here. 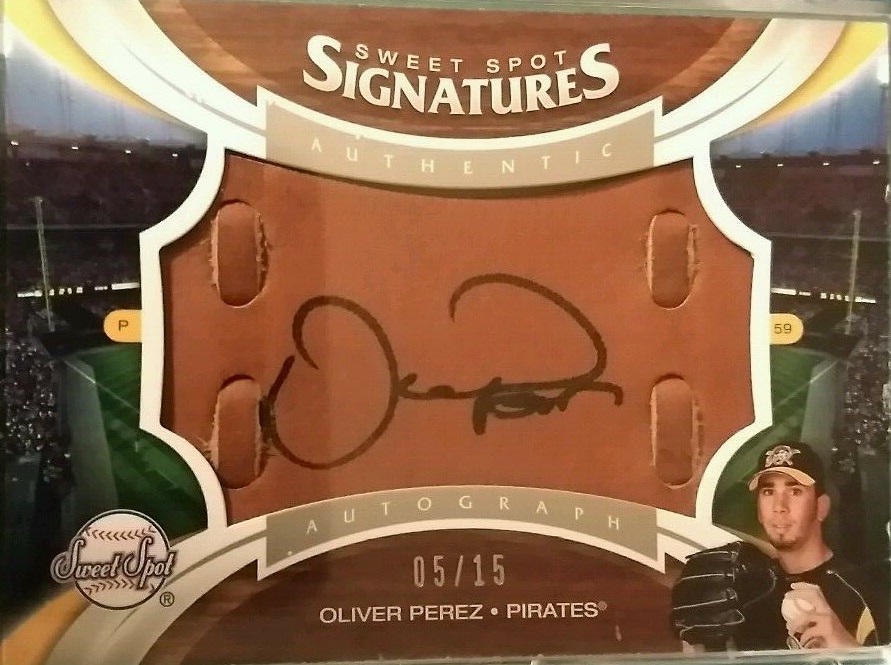 There’s a lot going on here, but the main draw is obviously the autograph. There were 15 of these cards produced with his autograph in black ink. There were another five that were autographed in blue ink. The autograph was authenticated, as you will see on the back.  The leather piece here is meant to look like it came from a baseball mitt, but it did not come from an actual mitt. It was just designed that way for the autograph. Up top is the set name, along with the word “authentic”. At the bottom of the leather piece, the word “autograph” is in the frame, so basically the two words go together to let people know it’s an authentic autograph. Below that, the card is numbered. In this case, the scan I pulled was card #05 of 15 cards. Then you see his name, team name, and a small photo of Perez, which is in the bottom right corner. The opposite corner has the set logo.  There’s a baseball stadium background for the entire card, and finally, on the side of the leather borders, it lists his position and uniform number. As I said, there’s a lot going on, yet all of the attention is focused on the autographed leather part.

I’m sure many of you remember the huge 2004 season by Perez, when it looked like the Pirates had a future ace. He put up 5.7 WAR that season. I’m not sure that I’ve come across another example this extreme, but that season was such a fluke compared to the rest of his career that it is unbelievable that he lasted so long. In his other 18 years of his career, he combined for 5.1 WAR. A 5.7 WAR season is special. It’s tied for the 41st best season in franchise history by a pitcher. The rest of his career combined wouldn’t even rank as a top 50 season, and his 19 years combined would only be the third best single season WAR for pitchers in team history. 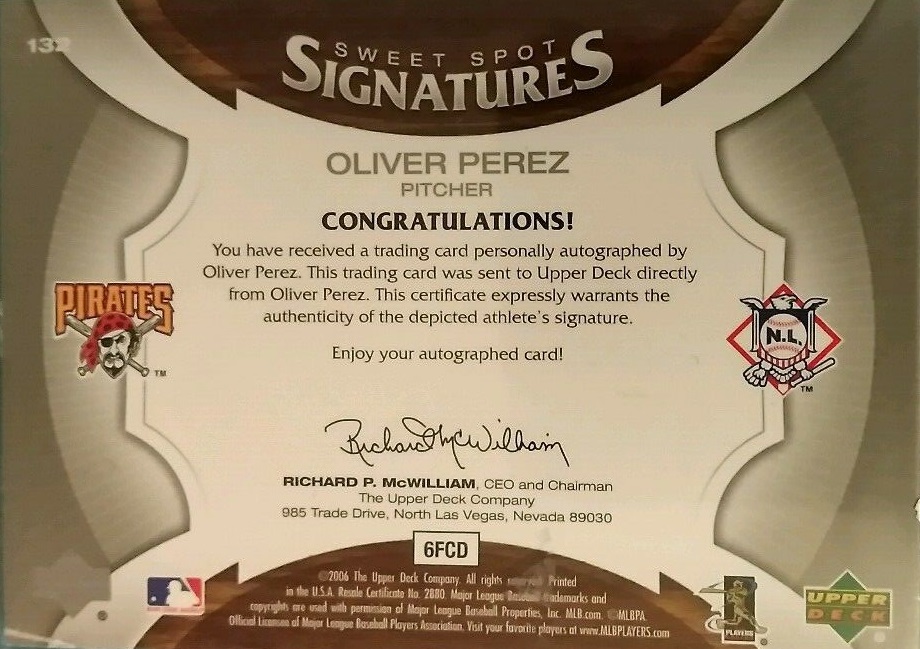 The back is just basically telling you the autograph is real and how it came about, while also giving you all of that legal nonsense at the bottom that no one cares about. It’s necessary stuff, but the best part about the back is the Pirates logo, followed closely by the National League logo.

As for the price of this item, I couldn’t find any completed auctions and the one listed above is for sale on Ebay for $19.99 with free shipping. In this case the best thing to do for a price idea is look at other players, in particular you want to compare him to other common players from the same set. Unbelievably, there’s no other black ink leather card from this set that has sold on Ebay in the last three months. A blue ink example, which is tougher to find, sold for $30. That’s the only one and it was for Cole Hamels. That’s not a perfect comparison, so the other way to look at it is live auctions. The lowest price is for a Jason Bergmann card. He pitched parts of six seasons in the majors with the Washington Nationals. His price is $9.99 with free shipping and a best offer option. There are a few others in the $12-$15 range, but most of them are more expensive than the Perez, so the $19.99 price probably isn’t that bad of you’re really interested.