Card of the Day: 2021 Topps Heritage In Action Josh Bell

Today’s Card of the Day is for Josh Bell, first baseman for the 2016-20 Pittsburgh Pirates, who turns 29 years old today. This is the second time that he has been in this series. To find the first time, you have to go all of the way back to the second article we featured here, which was posted on March 22, 2020. Today’s card is from a 2021 set, but it was put into production before the late December trade that sent him to the Washington Nationals, so he shown still with the Pirates. This card is also a tribute card, as the 2021 Topps Heritage set not only used the 1972 Topps design, they also included the design from the subset of In Action cards that were included in the 1972 set. This particular card is #310 in the set and shows Josh Bell on an In Action card. 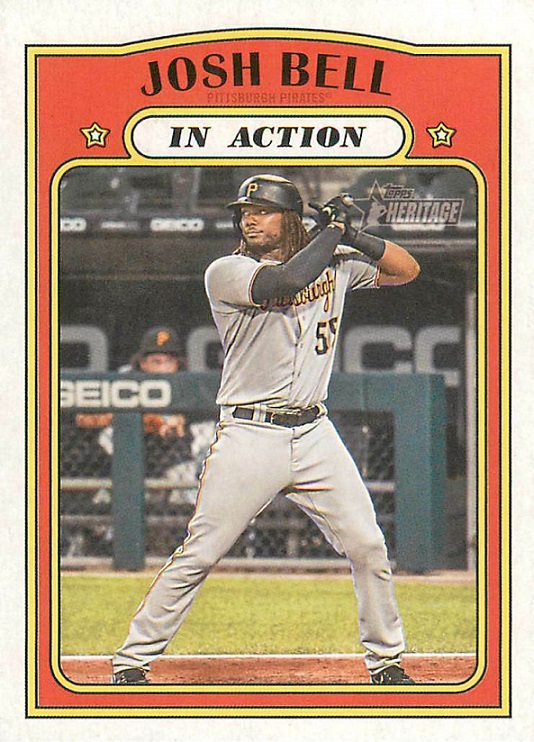 The In Action cards were only slightly different from the regular base cards in the set. In 1972, all of the Pirates players had orange and blue borders around the photo and “Pirates” written in big letters across the top. Other teams in the set had different colors/same style, but all of the In Action cards had the red/yellow combo you see above. Topps didn’t use action photos on their regular base cards for players until 1973, and if you’ve seen the quality of some of those photos, they are pretty bad. The In Action subset gave you a chance to see some of the best players in the game in actual game action, instead of a posed photo on the sidelines. In 2021 that’s obviously not a big deal, but in 1972 it was quite different.

There’s one subtle difference here between the 1972 and 2021 sets, besides that Topps Heritage logo just to the side of Bell’s head. The 1972 Topps set didn’t have the team name near the top between the player’s name and the In Action part. It really is subtle, because even on this much bigger scan, it’s a bit hard to read if you didn’t lose closely for it. Bell is shown here batting from the left side, almost with a bored look on his face, or maybe it’s confidence in his ability to hit that particular pitcher. This is a nice send-off piece, as not all 2021 Topps cards show him with the Pirates. The later release cards, such as Topps Finest or the Gypsy Queen set, have him pictured with the Washington Nationals. 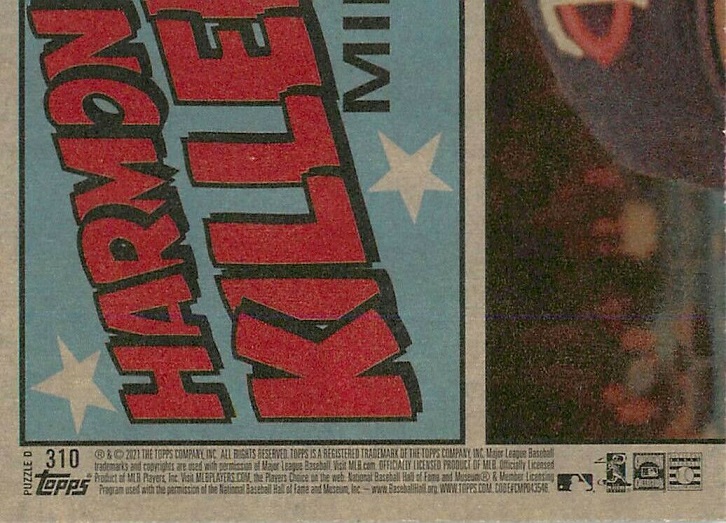 Were you expecting stats here? Maybe a little bio with fun facts about the player? The 1972 Topps In Action cards had advertisements for other subsets in the set. The 2021 version has a piece of a puzzle, with this one obviously being a Harmon Killebrew puzzle. In small print in the bottom left corner you’ll notice “puzzle D”, letting you know which puzzle this piece is for in the set. That puzzle back was something Topps did a few times and we covered here in this article about the 1968 Topps Gene Alley All-Star card. One thing to point out on the 2021 Topps backs. Look at all of the legal mumbo jumbo down there, along with all of those logos that they included. So much nonsense

This Josh Bell card is plentiful on Ebay, with over 100 auctions to choose from. The only one of note is an in-person signed example that is going for $40. Since this card is so easy to find, you can actually pick from numerous sellers who have it going for $1.00 delivered. The only card of note in the 20 sold auctions for this card over the last three months is one called a Target Red Border, referring to the store named Target, where they sold these cards. That card is obviously much tougher to find, but the price on the one was $5.98, so it didn’t add a ton of value.