Today’s Card of the Day is from a set that was geared towards the collectors who liked to gamble on a huge potential payoff.  The 2011 SP Legendary Cuts set from Upper Deck featured cut autographs from some of baseball’s all-time greats. There were all different varieties of signatures in the set, with solo autograph cards, two-player cards like we are looking at today, as well as cards with 3-6 autographs. They were also numbered, with some being much tougher to find than others, but all of them are tough to find. There were even cards of U.S. Presidents in the set, with most of them being 1 of 1 cards. The packs were priced around $200 each and it contained one card. This set was no frills at all. No base cards, just autographed cards of some of the all-time greats. 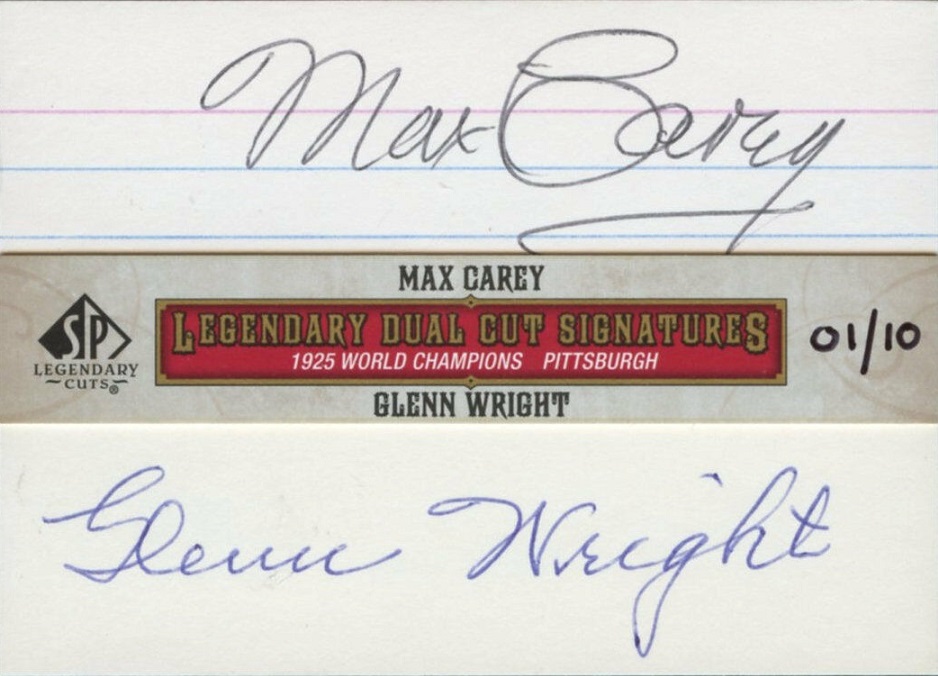 All you might be able to tell here, both of these autographs were on postcards at one time and Upper Deck cropped the autographs to fit on one card. In this instance, it works well. Some of the other autographs in the set don’t look as nice. They were on pictures or sheets of a team autograph, so you got partial autographs from other players, or you got a partial picture in the background. Both of these are nice solo autographs. If you’re an autograph collector for current players, then these might look odd to you. It might be hard to believe, but older players actually took time to make the autographs legible. You can tell that says Max Carey up top. You can clearly read Glenn Wright on the bottom. Try finding a recent card with two autographs where you can read both of them.

This particular combo had ten copies made, and since they are cut autographs, they all look a bit different. The scan I pulled was #1 of ten (see 01/10 on the card). These two players were paired up because they were both members of the 1925 Pittsburgh Pirates team that won the World Series. There are other similar themed cards in the set. This isn’t the best card from the 1925 Pirates in the set. There is one SP Legendary Cuts card with autographs from Carey and Wright, as well as Pie Traynor and Clyde Barnhart. If you know who has it, ask them to share a scan, because I would love to see it. 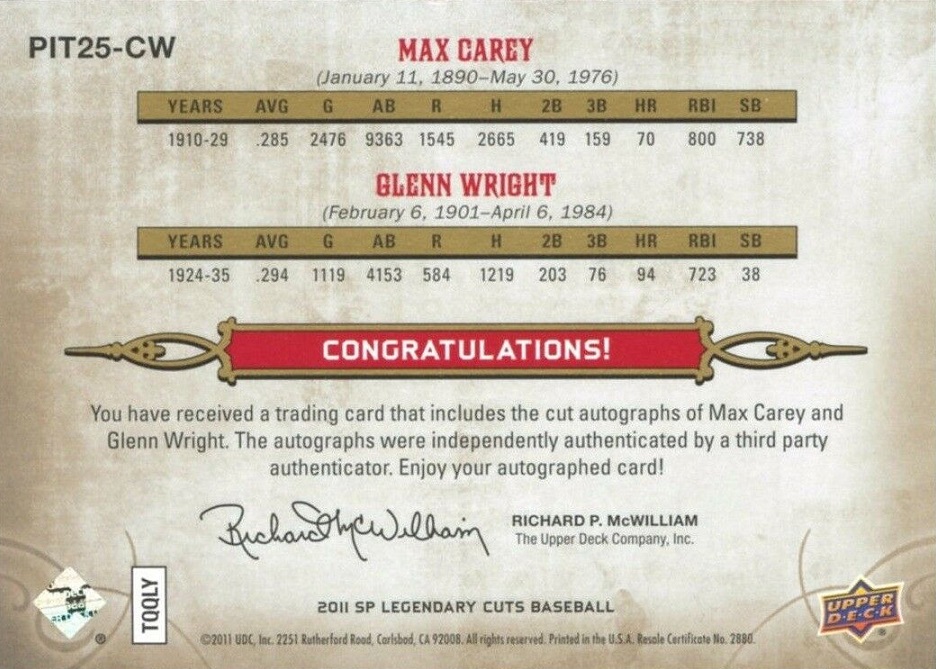 The back gives up some career stats for each player, as well as their birth/death dates. It also lets you know that the autographs have been authenticated. You can see the upper deck logo in the bottom, even though they don’t mention the company name on the front. What is interesting here is that there is no mention of Carey being in the Hall of Fame. Wright was a strong player for a short time until injuries really set him back. He’s probably most well known for turning an unassisted triple play.

As I said at the top, you were really taking a chance here buying packs, but with cards that were numbered “1 of 1”, you were the one who dictated the market. Completed auctions on Ebay right now show that just four cards from this set have sold in the last three months for more than $200. That’s out of 54 auctions. Many have sold in the $30 range, others have sold for even less. Of course, there are nearly 100 active auctions on Ebay with people asking more than $200 right now. If you wanted the only Abner Doubleday card in the set, you can have it. The seller is only asking $15,000 for it, though it has a best offer option. This particular Carey/Wright card has a $159 price tag, and it too has a best offer option. There’s also a solo Carey card for $139 and a solo Wright card for $79.