Today’s Card of the Day stretches the definition of what constitutes a baseball card. If you look at old baseball card price guides, there are a lot of “cards” over the years that obviously aren’t made of cardboard. In 1974, Topps put out a set of stamps that consisted of 240 players, which at the time was ten players from each team. Back then the stamps came in sheets of 12 stamps and there were 24 different sheets. If you just did some quick math and realized that 12×24 does not equal 240, well that’s because some of the players appeared on multiple sheets. Since the intention back then was to put them in an album, these stamps are slightly difficult to find, especially when compared to how many were printed. You also have the flimsy nature of a stamp that makes them even tougher to keep in good shape over the course of 47 years now.

Today’s “Card” of the Day is one of those ten Pittsburgh Pirates in the set. I actually saw this while scrolling through something completely different the other day on Ebay, and put the scan aside for a rainy day. Let’s pretend it’s raining where you are (maybe it is) and take a look at the 1974 Topps Stamp of Willie Stargell.

Here’s the front (the back is blank, like a typical stamp): 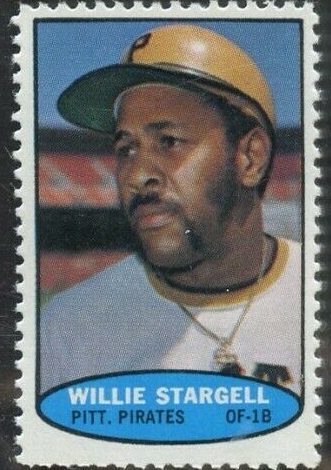 These stamps are small, so this scan is enlarged a lot to show detail. The actual stamp is one inch across and 1.5 inches tall. Almost every stamp in the set has the same look, with a portrait type photo cropped around the letters. A few of the batters in the set are in a batting pose, but otherwise when you lay out all of the sheets, there’s no poses that really stand out as different.

Due to the size of the stamps, there really wasn’t much room for information, so you got the player’s name, the team and his position. That area of the stamp has a blue background here, but it also came in yellow, red and green for other players, making the sheets of stamps very colorful. If a player had blue for that area, then the players on each of side of him (assuming he wasn’t on the end) had a different color. The writing for the player’s name also came in red and yellow, adding another difference to the mix. I’ve been told a few times that people from Pittsburgh don’t like the “Pitt.” abbreviation. I don’t know if that’s a universal hate, but don’t shoot the messenger here, Topps did it.

Stargell here is shown coming off of his best season, though the 1971 season gets a slightly higher WAR. The 1973 season saw him set a Pirates team record with 90 extra-base hits. He led the National League in doubles, homers, RBIs, slugging and OPS. He set a personal best in OPS (1.038) that year, and he played in a career high 148 games. Stargell finished second to Pete Rose in the MVP voting, though neither of them were top two in WAR. Tom Seaver ran away with that honor, while Joe Morgan was tops among position players.

This scan was pulled from the only sold auction on Ebay and honestly, if I saw this while it was active, I may have bought it. It is graded PSA 6 and it sold for under $20 delivered. It had an $18.95 price delivered with a make offer option, and someone made an offer and the seller took it, but I don’t know the exact price. These stamps can get pricey. A Dave Parker, which is basically like a rookie card for him, sold for $459 in a PSA 10. Complete sets sell for only about $150, so that high grade really adds on a ton of value. It was tough to keep all of those perforations perfect as you separated the stamp. You can see on the Stargell above that a few of the bottom ones aren’t as clean as the rest.

There are no solo Stargell stamps currently for sale on Ebay. There’s a sheet with him on it for $15 delivered. That sheet also includes Dave Giusti and Bill Robinson, who was on the Philadelphia Phillies at the time.