Today’s Card of the Day comes from a player who spent a short time with the Pittsburgh Pirates, but he got a special card from Topps during that time. Back in 1960, Topps decided to add “All-Star Rookie” cards to their sets. The selected the best rookies from the previous season at each position and put a trophy on their cards. The 1960 All-Star Rookie cards had a bit of a different look that the regular cards in the set, but in 1961, the cards had the same look, with just the trophy added on to the front. That idea ran through 1973, took a one-year hiatus, then returned for the 1975-78 sets. Topps brought back the idea in 1987, and continued it into their 1988 set, where Al Pedrique of the Pirates was named as the top rookie shortstop. Here’s a look at that card. 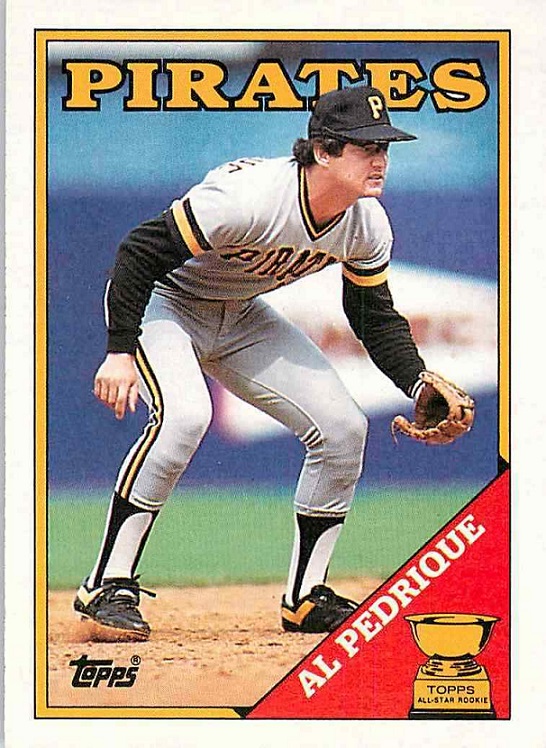 Topps was very popular during the 1987 season with their 25th anniversary redesign of the 1962 set, and then 1988 became the year when card collecting really took off. These cards were massively overproduced, as were the 1988 Donruss cards and the first year of Score on the market. Fleer also printed a lot of cards, but the other three sets were all overproduced and they flooded the market, killing any real chance of future value.

This 1988 Topps design used team colors in the borders and team name at the top, so not all of the cards look like what you see above. All of players in the set had their name in a thin rectangle that went from the bottom border to the right side border on an angle. The Topps All-Star rookies were the only ones that didn’t follow that pattern. On those cards the entire right/bottom corner became as area for the name and the trophy, which is what you see above. The regular cards in the set would have the border and part of the picture in that area covered by the trophy, with the player photo/photo border only obstructed by the rectangular banner for the name.

A little design idea that Topps put on some of the cards was having the player partially obstruct the team name, as you see with Pedrique above. 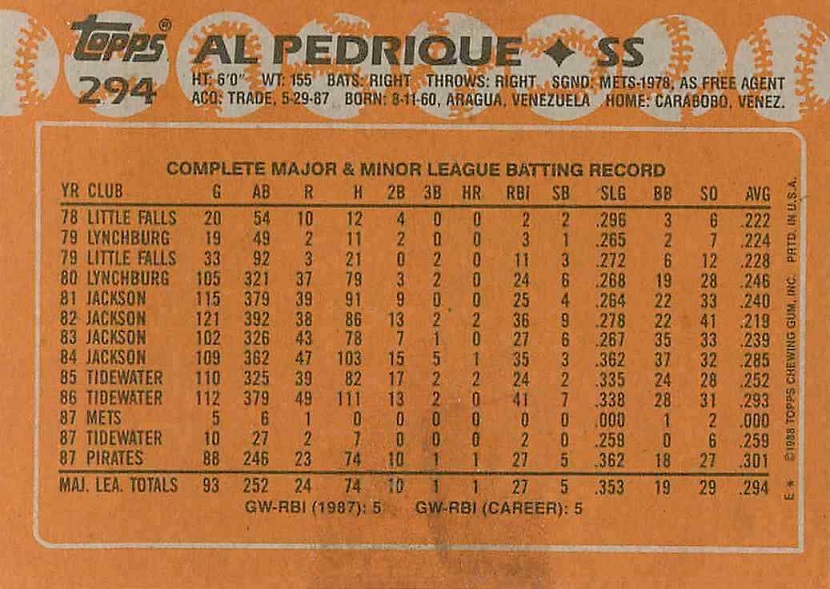 The back design is rather plain except for the baseballs up top. Topps started out with some great looking backs in their history, but they got boring during this time. That’s okay, because they had all of the stats here from his first season in pro ball. It’s really amazing that Pedrique stayed on to make it to the majors. He spent four full seasons in Double-A, then two full years in Triple-A before he finally got called up in his tenth year of pro ball. As you can see, he put up a nice average with the Pirates, but not much else, and he didn’t actually play a lot that season. That tells you that it was a very light year for rookie shortstops. Pedrique, who turns 61 today, joined the Pirates in a trade for Bill Almon in May of 1987. His big league career didn’t last much longer after this card was released. He played his final big league game in June of 1989 with the Detroit Tigers, finishing up with 174 games in the majors.

One added highlight here is the game winning RBI category at the bottom. That stat was very popular for a short time until players started using it to negotiate contracts, then it disappeared.

These cards are very easy to find, but sometimes easy-to-find cards aren’t always readily available on Ebay because there isn’t much money in them for sellers. However, there are over 100 listings for Pedrique. There are some with multiple cards if you want to buy some for your friends. There are also autographed ones. The regular cards can be had for the usual $2 each delivered, with half of that price being shipping. By my count, there are 20 autographed ones on Ebay right now and they range in price from $4 to $14 (I’d suggest the lower price). The autographed copies are more popular among collectors. There are six completed/sold auctions for this card over the last three months and five of those were autographed.