Back on October 6, 2020, I wrote a Card of the Day article with a very similar title to the one you see above. The 1971 Topps set has two cards featuring rookie stars of the Pittsburgh Pirates. One of those cards features Gene Clines and Fred Cambria. In that article linked above, I mentioned that there was a second Pirates Rookie Stars card picturing Milt May and Ed Acosta and also said that “I’m sure we will feature that card here in the future”. Welcome to the future.

On this date in 1971, the Pirates made a trade to acquire veteran reliever Bob Miller from the San Diego Padres. The Pirates were making a run at the World Series that year and Miller ended up posting a 1.29 ERA in 28 innings over 16 appearances after joining the team. To get Miller, the Pirates gave up two young players, outfielder Johnny Jeter and pitcher Ed Acosta. So today we look at the rookie card of one of those players, as well as a young catcher who would also soon be traded for pitching help. As a side note, Jeter is on a 1970 Pirates Rookies card with Dave Cash, which we covered here. 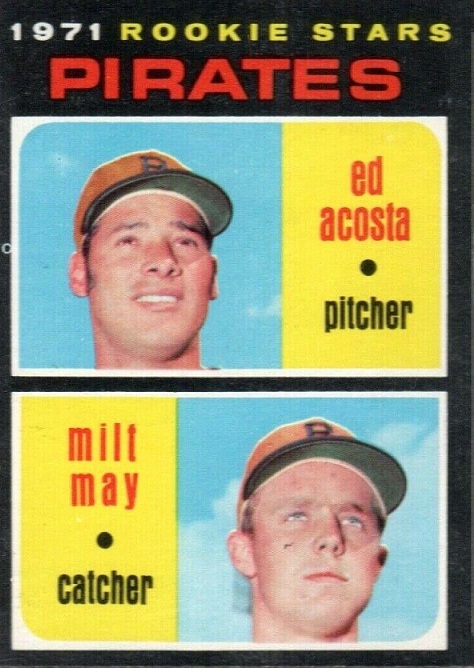 I’ve mentioned multiple times that I’m a big fan of the 1971 set. It’s the first time that Topps used black borders for the design, so it really stood out, just like the gray borders on the 1970 cards and the wood-grain 1962 cards. I’ve always been a fan of the old multi-player rookie cards too. One interest thing here with this card is Topps choice of using a yellow box next to the players, with red letters for the names. The Clines/Cambria rookie card uses a red box and white letters for the name, so the two rookie cards from the Pirates don’t look the same. However, they both have Pirates written in red letters at the top, while all of the single-player Pirates cards from 1971 have the name written in yellow. It certainly looks here like the hats were added to the players afterwards and not part of the original photo. You can see a white outline, both underneath and on top of the hats. I noticed some white lining on other Pirates on the set underneath, so that might be on the cap itself, because those other players don’t have the white outline around the top, unless Topps just did a better “photoshop” job with the single-player cards. 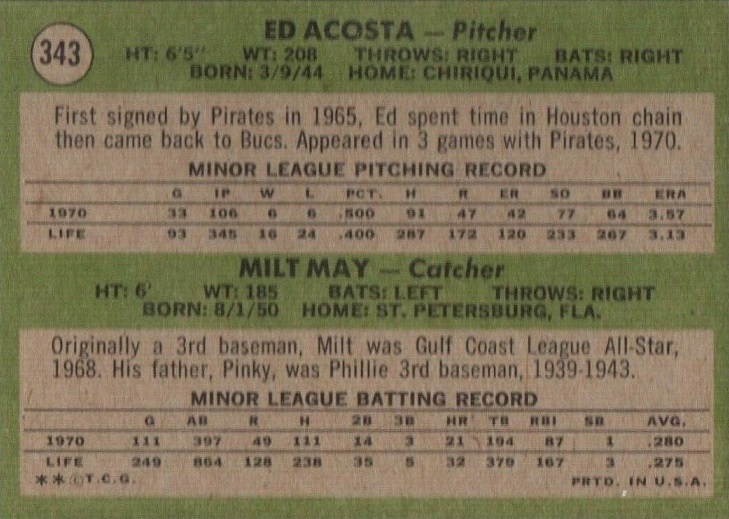 The back has some bio info on each player (height/weight, bats/throws, born/home) as well as a quick line of information. For May, you see that he was actually six years younger than Acosta, and his father played Major League ball, so he came from good bloodlines. The note on Acosta would be more interesting if you could see his full minor league stats. He debuted in pro ball in 1967 in the Houston Astros system, but that fact listed above is correct. The Pirates signed him in 1965 and released him before he could pitch a game. The Astros then released him after two seasons and he was once again scouted by the Pirates, who signed him in September of 1969. Despite only having experience in A-Ball with the Astros, he was up in the majors during the 1970 season. Those three games mentioned above would be his only three games for the Pirates. As for May, he would stick around a little longer before going to the Astros in a 1973 trade for Jerry Reuss.

This card isn’t plentiful on Ebay for the era, but it’s still easy to find and there are many differences among those options. It can be found in low grade to high grade, both graded and ungraded. There are also a few signed by Acosta and three signed by both players. The most expensive option is a PSA 8 for $56, which is a tough grade for this set. Any types of flaws really stand out with those black borders, so the really high grade cards make a great design even better looking. The next most expensive is one signed by both players for $38. Hopefully you didn’t run right over to Ebay and grab that $56 card, because there are two other PSA 8 cards and they are going for $34 and $30 respectively. If you just want a cheap one, the two lowest priced once are under $2 delivered, both they have been well loved over the years.