Today’s Card of the Day pays tribute to a tall lefty who threw a no-hitter for the Pittsburgh Pirates on this date in 1976. We have featured Hostess cards here four times already, but this is the first time for the 1977 set. It’s the second time for John Candelaria, who was here last November on his birthday for his 1976 SSPC card, which is considered to be one of his rookie cards.

The 1977 Hostess set featured six players from the Pirates. There were 150 cards in the set and they came in three-card panels on the side of boxes of Hostess products. Card #80 in the set was 23-year-old John Candelaria, who was in his third season in the majors in 1977, and it would end up being his best year. He went 20-5 that season and led the National League with a 2.34 ERA. It was the only year in his 19-year career that he was an All-Star, the only time he received Cy Young support, and the only time he received MVP votes. Add in his no-hitter from the previous season and he was a popular player among card collectors at the time that these Hostess cards were in stores. 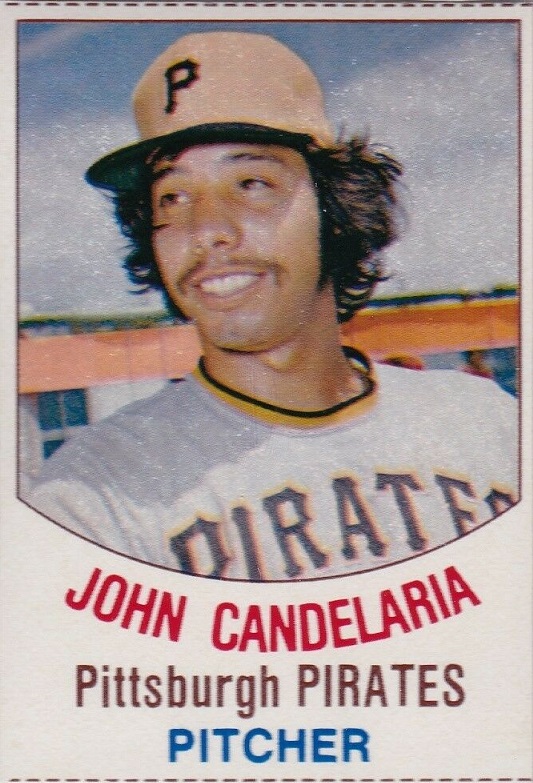 Out of all of the Hostess sets from this era, this is my least favorite. None of them really had great designs, but the one they chose here cut out a lot of the photo with that large area on the bottom for the name/team/position. That left you with a smaller photo of the player, though it’s not a huge difference from the 1975-76 sets, which also had a lot of room for the player information on front. In 1978-79 Hostess switched to smaller borders for the name and bigger photo areas. I have cards from all of these sets, but even I struggle to tell them all apart because Hostess didn’t go all out with design changes. The curved photo here is the best giveaway that it’s a 1977 set. 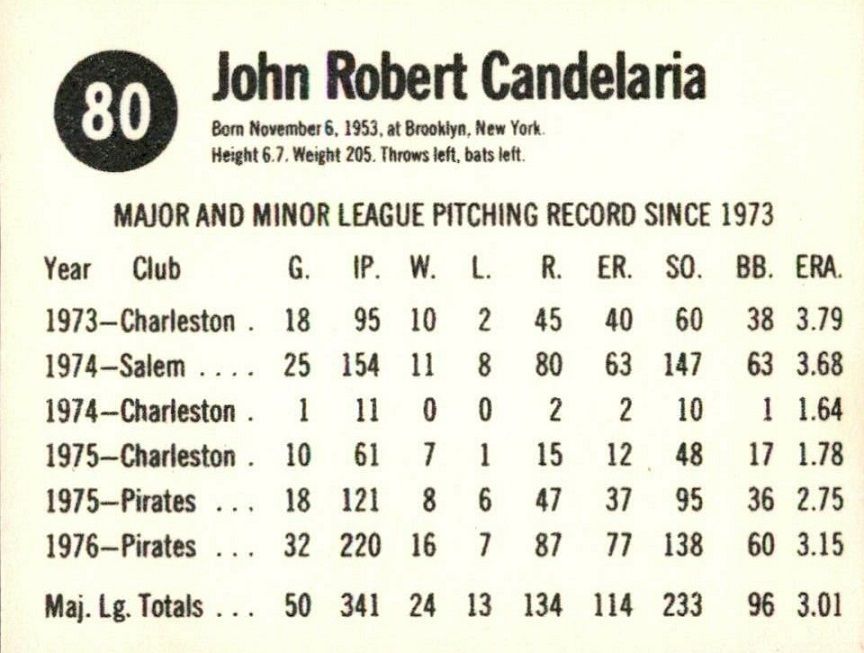 The backs of Hostess cards were very plain. They all had white backgrounds and black writing, with no design at all. Candelaria was in the perfect place in his career for this set. They didn’t have a lot of room for stats, but if a player had a very short career to that point, you could possibly get his full big league/minor league records. That’s what you have here. Candelaria was drafted in 1972, but he didn’t debut until 1973. The one thing that throws you off here is that Charleston in 1973 was an A-Ball team in South Carolina. The 1974-75 Charleston you see above is Charleston in Triple-A, located in West Virginia. He didn’t play for the same team three years in a row and then jump to the majors, but it sure looks like it here.

There are currently 11 of these cards on Ebay right now. One of them is very special, because it comes in a full uncut strip of three cards and Candelaria is flanked by Hall of Famers Catfish Hunter and Nolan Ryan, so that is one priced accordingly. You can’t find many of the full strips because the intention was to cut them up separately, hence the lines on the sides for cutting. The other ten auctions are solo Candelarias and they range in price from $60 for a PSA 7, down to multiple auctions in the $2-$3 range for cards with various degrees of poor scissor work. There is also an autographed one for $19.95, with a best offer option.