Today’s Card of the Day comes from the 1912 T207 set and it features Bill McKechnie, the Hall of Fame manager who spent six seasons playing for the Pittsburgh Pirates and another five seasons managing the team. In fact, the Pirates named their Spring Training stadium after him until they got greedy and decided to change the name without telling anyone in his family. Did I mention that he lived in Bradenton and they found out on the news that the name was being changed? Luckily the new name is now The Stadium Formerly Known as McKechnie Field, and if you think otherwise I will fight you on that. Don’t let that name die. Yes, it still bothers me, a lot.

What doesn’t bother me is writing a Card of the Day article for the baseball great who was born on this date in 1886 in Wilkinsburg, PA. This particular card is a great offering from his playing days. He wasn’t a great player, but he lasted exactly 11 more years in the majors than I did, and I played a TON of baseball growing up. 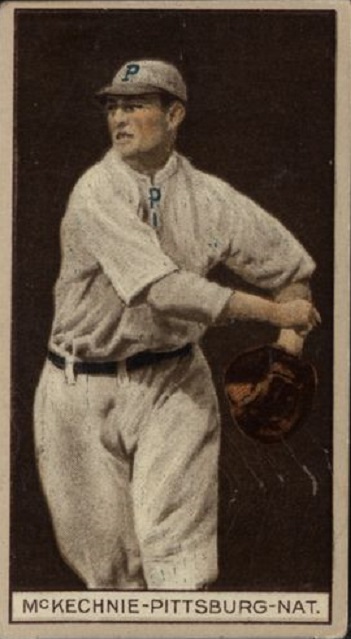 I absolutely love the pose on this card and the fact that the 1912 uniform is a one-year style in team history. In fact, it’s the first year that “Pirates” showed up on the jersey. There are other Pirates cards in the T207 set that show off the jersey much better. It has vertical stripes that you can only sort of see in this photo. I love the intensity on the face of the 25-year-old McKechnie. It’s almost as if he just found out from someone from the future what the Pirates did with a stadium that had his name on it.

The T207 set is one that has many fans from the vintage card collecting folks, but there are also plenty of people who don’t like it as well. The plain brown background on every single card and gray border just give every card in the set a dull look. The player selection in the set is pretty bad. Many greats are missing including Honus Wagner and Ty Cobb, though it has Shoeless Joe Jackson. The artwork can also get a bit generic with some players. I have about ten cards from the set, but I didn’t really collect it, just wanted some type cards and Pirates players. Yes, Dots Miller is in the set. 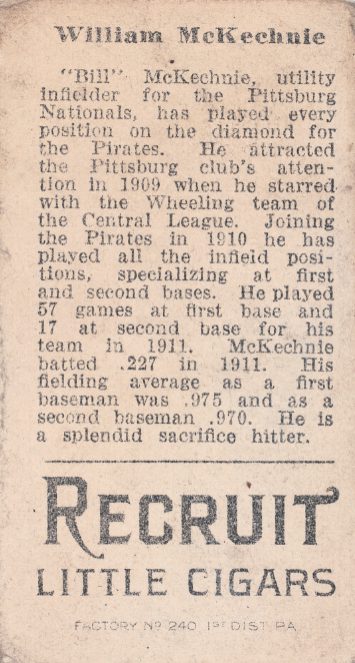 Even the backs have a bland look with a white background, black lettering and a cigarette brand name on the back. However, I really like the bio section for each player. You get some nice info on the players, though this one has a bit of an error I guess, maybe an omission might be a better word. McKechnie debuted with the Pirates in September of 1907. So he pretty much drew their attention some time before they purchased his contract on August 13, 1907 from a minor league team. At least two years before the date listed above. Despite the bland look here, there are backs in the set that look much better (find a Red Cross image), but not every player has every available back. It can actually get worse than this one, as there are anonymous backs, which basically means that they have no cigarette ad and there’s just blank space in the ad’s place.

If you’re interested in this card, then just know that it is tough to find and it can be pricey if you find one. It’s a rare card and it’s popular because he’s a Hall of Famer. There is one active auction for this card on Ebay right now and none under completed auctions. That one is a PSA 1 (lowest number grade, though better than authentic) and it’s for sale for $334 delivered, though there is a make-an-offer option.