As everyone who reads these articles should know, the Pittsburgh Pirates won the 1960 World Series. Even if you’re just here as a fan of card collecting, you probably already knew that fact. The series ended on one of the greatest home runs ever (many of you read that and said that “one of” part wasn’t necessary). Many know what happened when they got to the World Series, but the story of how they got there isn’t as well known. It was definitely a team effort to get to that spot. The club had two future Hall of Famers in Roberto Clemente and Bill Mazeroski. They received 4.0 WAR (Clemente) and 2.5 WAR (Maz) that season. For Clemente, that was his 13th best season according to WAR. For Mazeroski, it was his ninth best season. So it wasn’t exactly like the Pirates got career years from their best players. In fact it was far from true.

As I said, it was a team effort and one of the in-season acquisitions that helped them get to the top was Clem Labine. He joined the Pirates on August 16th and was used often over the last six weeks. He also pitched outstanding over the final part of the regular season. So on the 95th anniversary of his birth date, we take a look at his first card with the Pirates. Here is card #22 from the 1961 Topps set, featuring right-handed pitcher Clem Labine. 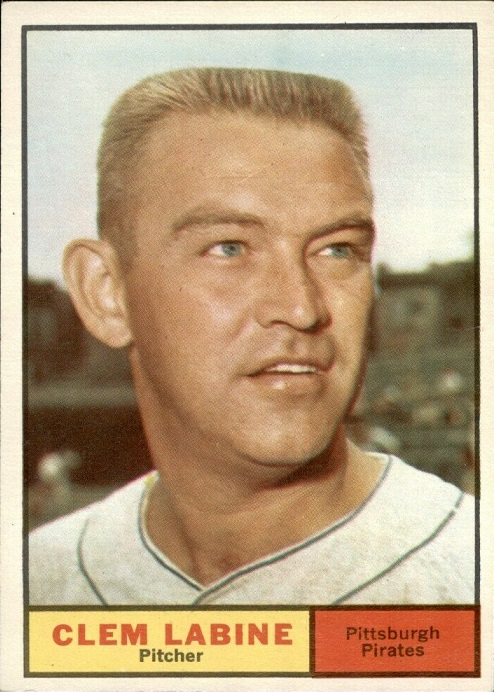 I’m not a huge fan of the 1961 Topps and I think just placement hurts it as far as design. I really like the 1960 Topps layout and the 1962 set is among the top five Topps sets ever in my opinion. Then in between they had this rather plain design. What makes this particular card a bit worse is that Topps had to use one of their tricks for Labine because they didn’t have a photo of him with the Pirates. Here’s a closeup with no hat so you don’t know what team he is pictured with on the card. It says Pirates, but that’s no Pirates uniform. I’m also not a big fan of portrait cards without the baseball caps, but as Grandpa Simpson would say, he’s got a haircut you can set your watch to. I have no idea what it means, but it’s a Simpsons reference, so it makes sense. 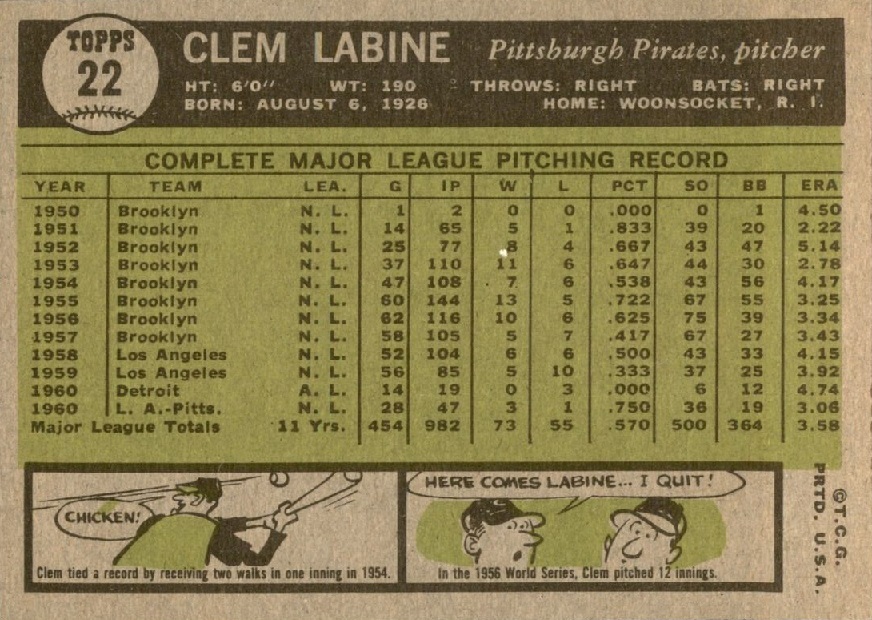 The back doesn’t differentiate between his stats with the Los Angeles Dodgers and the Pittsburgh Pirates in 1960, but they do make a different column for the Detroit Tigers because they are in a separate league. With the Pirates that year, he had a 1.48 ERA in 30.1 innings over 15 appearances. He had a 3-0 record and picked up three saves. The bottom of the card has three appearances by generic Topps man, who looks like no player ever. The one cartoon mentions that he pitched 12 innings in the 1956 World Series, which really isn’t that impressive. Plenty of guys have pitched more innings in one series. However, they left out one important fact. He had a 0.00 ERA in that series.

If you’re interested in this card, it’s fairly easy to find on the Ebays in whatever condition you want (except those expensive high grade examples). There are 22 examples up at the time of this writing that are $3 or cheaper, which includes delivery. There are another 179 auctions for this card that range in price from $3+ to $52 for an autographed one. He passed away in 2007, but his autographs are still easy to find. Being part of the Brooklyn Dodgers for so long, winning a title in both Brooklyn and Los Angeles, plus the 1960 Pirates connection, made his autograph a popular one to collect. That means you can find his autograph fairly easy and there are ten of them on Ebay right now on 1961 Topps cards. The $52 one is very high. You can get a nice example for $14 delivered. As for high grade, the best is a PSA 8 and they want $44 for that one. Whatever you choose, happy collecting.