Today’s Card of the Day comes from the 1974 Topps Traded set, their first venture into an update of their regular set released earlier in the season. This card of utility man Kurt Bevacqua came about because he was traded to the Pittsburgh Pirates on December 4, 1973, which was too late to change his card design that was included in the 1974 regular Topps set. That one shows him swinging a bat, wearing his Kansas City Royals uniform. The card below also shows him wearing a Royals uniform, but Topps found a way around that as you will see in the photo below. 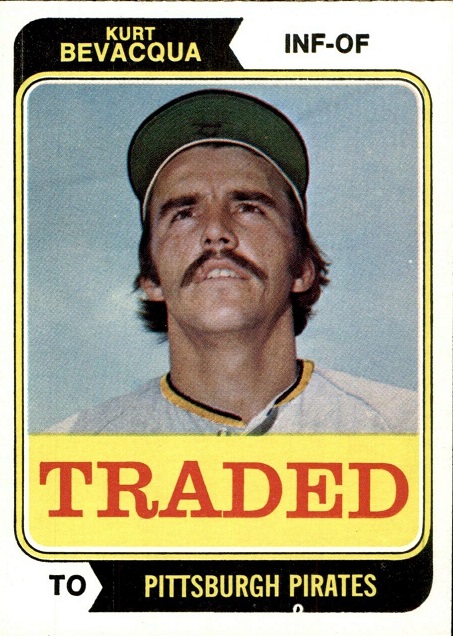 I’m a big fan of the Pirates cards in the 1974 set because they utilized team colors in the design. The traded cards are basically the same, except for that huge “TRADED” stamp across the bottom. If you didn’t know anything about cards from this era, a quick glance would lead you to believe that they got a photo of Bevacqua on the Pirates. However, that gold/black around the collar was drawn crudely onto an existing picture of him with the Royals. Look closer, you’ll see. One of the tricks of the trade for Topps was getting photos of players that could be used if they were traded. A lot of times it was a closeup with no hat, but this works the same because the angle hides the identity of the hat. 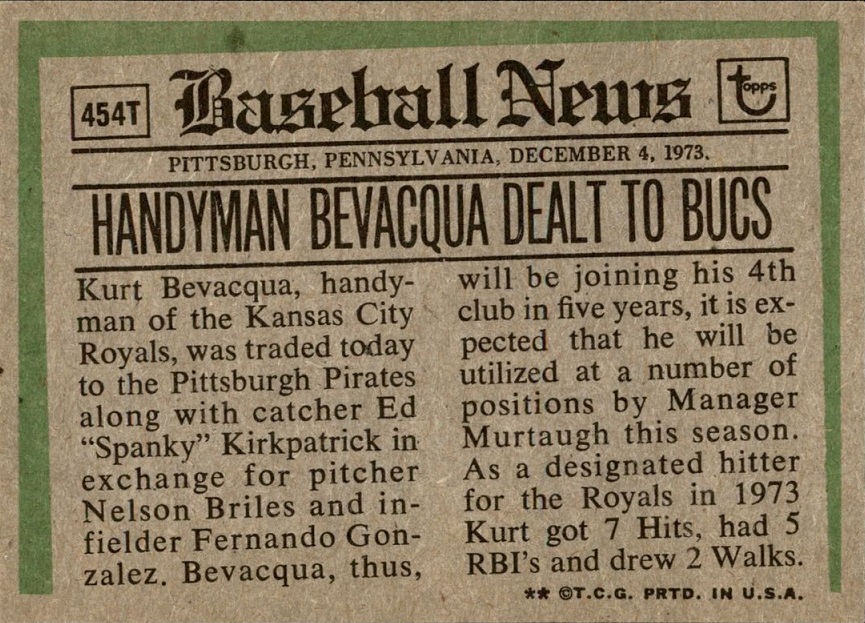 The back is set up like a newspaper. I’m sure all of you folks who were around in 1973 remember the daily Baseball News getting delivered to your door, especially if you lived in the Pittsburgh area. If you were around on December 4, 1973, you were reading something else because they probably didn’t have this story until the following day, since the trade was made on the 4th. I’m not sure though, maybe the fictitious paper had an evening edition.

The back notes that Bevacqua came to the Pirates in a four-man trade, which also included pitcher Nelson Briles. There’s a great twist to him being included in that deal. The whole reason Bevacqua is here today is because he was part of This Date in Pittsburgh Pirates History this morning for the second trade that brought him to the Pirates. That one happened in 1980 on August 5th. Nelson Briles was also included in today’s history article because he was born on August 5th, so I actually considered using him for today’s Card of the Day subject before deciding to go with Bevacqua.

The back notes twice that Bevacqua was a handyman for the team. He ended up only playing third base and left field for the Pirates, partially due to the fact that they traded him back to the Royals on July 18, 1974 after playing just 18 games. For some odd reason, Hits and Walks are both capitalized in the final sentence, but designated hitter is not capitalized.

If you’re interested in this card, wait at the nearest bus stop for the one headed downtown to Ebay, where there are currently 67 auctions for this card. There are seven completed/sold auctions and all but one ended around $3-$5 each. One of them was autographed and this might be the route you want to take if possible. I say that because Bevacqua has a beautiful autograph, unlike 99% of of the autographs you see from modern players, where you can barely read what they wrote. You won’t be disappointed with his example, and the one closed auction ended at $7.40. There are two for sale in the $6.99 to $7.99 range. For another option, there’s an active auction for a PSA 8 that is for $23, though it has a “make offer” option, so you can get it a little cheaper than that, if you want one in great condition. It you just want a plain old copy, you can get it for $2 delivered, with many options in that range.