Today’s Card of the Day comes from the 1886-90 N172 Old Judge set, which I say without doubt, that it is my favorite baseball card set ever. The set was produced in five separate years, but it’s considered to be one big set. That’s partially due to the fact that the same cards can be found in multiple years. Today’s card is one of those that can be found with two different versions of the same card.  Let’s get right into the card so I can explain it better with a photo as a guide. Here’s the 1888 N172 Old Judge card of Pittsburgh Alleghenys first baseman and Hall of Famer, Jake Beckley. 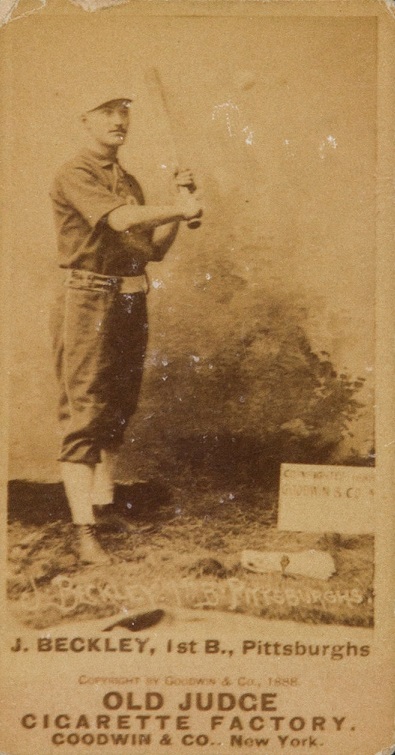 As you can see at the bottom above the ad for Old Judge cigarettes, which were manufactured by Goodwin & Co. in New York, there is a copyright of 1888 on this card. That isn’t always written on the Old Judge cards, but in this case it makes for easy identification of the year. The Pittsburgh Alleghenys acquired Beckley and his teammate Harry Staley from the St Louis Whites of the Western Association on June 19, 1888, with both players signing their contract that morning. Beckley was in the lineup at first base the next day for his big league debut, and he ended up playing 20 years in the majors. He collected the first two of 2,938 hits that day, including his first triple. He ranks fourth all-time in triples with 244.

If you go up a little more from the copyright line, you see “J. BECKLEY, 1st B., Pittsburghs”. The term “Pittsburghs” was often used in print to describe the Alleghenys, since the name Pittsburgh Alleghenys wasn’t the actual team name back then. There wasn’t an accepted standard way to write the team name and various writers around the country took liberties with the name, but “Pittsburghs” was widely used. When the Player’s League team was in town for the 1890 season, the local writers called them the “Pittsburghs” and mainly used Alleghenys for the National League team, in an attempt to easily tell the clubs apart.

If you look up just a little more into the photo, you can see that same “J. BECKLEY, 1st B., Pittsburghs” written in white on the photo. That was actually scratched into the glass plate negative, so it appeared when the card was printed.

I mention all of that to say something you might have figured out already by looking at the photo. That uniform is not a Pittsburgh uniform. Those white stockings there were for the St Louis Whites, back when team names were sometimes just based on the color of part or all of the uniform. This Beckley photo was taken some time between March and June of 1888 and it was released with him being listed as being on the St Louis Whites. When he was sold to Pittsburgh, the card manufacturers updated his card and began printing new ones with the Pittsburgh name. The Old Judge company (whoever was in charge of their card-making) did a great job of keeping up with transactions. The aforementioned Harry Staley can also be found with the same cards showing him listed as being on St Louis and on Pittsburgh.

This particular card of Beckley is called “Strike, looking at ball” and it’s listed as pose #1 of four poses that he has in the set. That name and that number were not know back then when people were pulling Beckley cards out of cigarette packs, but through tireless effort over the years, a full checklist has been put out, though new cards have been added to the list as recently as last year when one was discovered that was previously unknown.

The Old Judge set is an amazing set of cards that captures baseball history during the early part of the game as a Major League sport, giving us our only known photos of numerous players from the era. If you ever get the collecting bug and want to play with the high rollers, I suggest buying a common card, such as Jocko Fields, Ed Morris or John Coleman of the Alleghenys. The Beckley cards, when you can find one, will be pricey. I bought my Beckley shortly after I got my first job, so I wasn’t paying current prices back then. That particular scan above is of a card that was a PSA 2 and it sold in Heritage Auctions back in 2015 for over $1,300. All of the Hall of Famers in the set command a high price, though some like Tim Keefe, John Ward and Tommy McCarthy were printed in higher numbers than Beckley or Pud Galvin and they can be found cheaper. A common in decent low-grade shape will run you about $200.