Some old games just don’t make a lot of sense. This Game Rewind articles covers one of those contests. I wanted to do something to help fill out future This Date in Pittsburgh Pirates History articles for August 2nd, which was a really slow day in Pirates history, with just two players born on that date and one trade of note. Yesterday we featured a Game Rewind article from August 2, 1900. I found two games I thought would make a good story and decided that one was a bit more interesting, so I went with it yesterday. Instead of just forgetting this game from 1912, I decided to just do back-to-back Game Rewind articles before going back to the Card of the Day feature tomorrow. So that’s a long way of telling you why I’m posting about an August 2nd game on August 3rd. Now let’s get into the important details that make this game worth writing about 109 years later.

The Pirates were visiting the Boston Braves on Friday, August 2, 1912, the third game of a five-game series, which included a Saturday doubleheader to make up for an earlier rain out. The Pirates won the first two games of the series, with a 7-6 victory on Wednesday and a 1-0 win on Thursday. Just 1,500 fans saw that second game, as Claude Hendrix threw a three-hit shutout over Buster Brown, who got tagged for one run on four hits. A crowd of 3,800 showed up at South End Grounds for game three to watch young Ed Warner, a Massachusetts native, go up against right-hander Walt Dickson, who at 33 years old was playing his first full season in the majors and he had a 2-11 record at the time. The Pirates were 53-37 coming into the day, while Boston held a 25-67 record.

Pittsburgh had a trio of Hall of Famers in the 2-4 spots in the batting order, though it has a slight asterisk. Max Carey was hitting second and playing left field. Honus Wagner was batting cleanup and he was at his familiar shortstop position. Between them was Bill McKechnie, the Hall of Fame manager, who played 11 years in the majors, including six seasons with the Pirates. The rest of the lineup featured Alex McCarthy, who played eight years for the Pirates, George Gibson, one of the franchise’s greatest catchers, right fielder Chief Wilson, a key member of the 1909 World Series champs, and the great Dots Miller. Don’t argue with me on that description. The manager was Fred Clarke, who played regularly for the 1900-11 Pirates and sparingly for the 1913-15 Pirates, but never took the field in 1912.

The Braves lineup didn’t have the star power of the Pirates. They had Bill Sweeney, who was having an out-of-body experience that year, and he was batting .355 coming into the day. He put up 5.3 WAR that season, more than double any other year during his career. The had Vin Campbell, who today would have the tag of being a “professional hitter”. He would soon join the Pirates in a trade. Their cleanup hitter was George Jackson, a man who played just 152 more games than me in the majors, and he finished the 1912 season with -0.1 WAR. They had a bunch of veteran players on the downside as well, which helped explain the 25-67 record at the time.

The reason we are here though is the pitcher for the Pirates, Ed Warner. He was signed out of Brown University and he made his big league debut exactly one month earlier. He pitched four times during that first month and started two games, getting a no-decision in each contest. He had a 4.43 ERA in 20.1 innings and showed an inability to miss bats, with just five strikeouts. He was 23 years old at the time and had zero pro experience other than his 20.1 innings with the Pirates. The Braves were a better suited target for him with their mediocre lineup, but this was also his first road game in the majors, although he was pitching in his home state, not far from his college either. Unless you read our daily This Date in Pittsburgh Pirates History articles every day, then you probably have never heard of Warner. That likely fact isn’t due to this game.

There’s no full play-by-play available, but there are plenty of recaps of this contest and I’ve read all of the major ones to pick out as many details as possible. That being said, there’s only one real inning to talk about here. That’s because this was a scoreless game through six innings. The local paper noted that the game was played under threatening skies, which kept the attendance down a bit, but those who showed up saw a brilliantly played game on defense and a pitching duel through most of the game.

The opposing pitcher (Walt Dickson) had an awful 3-19 record in 1912, but his 3.86 ERA wasn’t that bad. The league average was 3.40, but his team had a combined 4.17 ERA that year, so even on a bad team, he had a little bad luck. His fellow starter Hub Perdue went 13-16 with a 3.80 ERA, which was just six points lower. Despite that win-loss record, Dickson had pitched against the Pirates twice already in 1912 and he held them to one run over 17 innings. This was their third time playing each other and Pittsburgh knew they were going up against a tough pitcher. So maybe it was no surprise that he shut them down for the first six innings of the game. The Pirates were a pretty good team though, so you would expect that they finally got to him at some point.

Dickson wasn’t perfect early on and the Pirates got to him a bit in the fifth. George Gibson singled and was thrown out attempting to steal. Ed Mensor doubled and Carey singled, giving them three hits in the inning and nothing to show for it.

In the top of the seventh, George Gibson came up for the third time and he collected his third base hit, swatting a single into right field. Warner tried to bunt him over, but the ball didn’t get far from the plate and catcher Bill Rariden forced Gibson out at second base. The next batter was lead-off hitter Ed Mensor, and he grounded out to shortstop, which could have been an inning-ending double play, but the throw from second baseman Bill Sweeney ended up getting by first baseman Art Devlin. Mensor went all the way to third base on the play. Then the Hall of Famers took over. Max Carey singled in Mensor for the first run of the game. Bill McKechnie singled to center field, then Honus Wagner lined a ball over the head of left fielder George Jackson, bringing in Carey and McKechnie to make it 3-0. With Wagner at second base, reliever Ed Donnelly came in and got Dots Miller to line out to left field on a ball that was hit to nearly the identical spot that Wagner hit his double.

Boston tried to rally against Warner in the bottom of the seventh, but the arm of Chief Wilson kept them from scoring. He was known for having one of the best arms in baseball, which resulted in 177 outfield assists in his nine-year career, at a time when most batters knew not to run against him. The first batter (John Titus) lined a ball that hit high off of the outfield fence in right field and Wilson’s quick throw kept the runner at second base. That was key because the next hitter (Art Devlin) lined a single to right field and Titus wasn’t going to try to go home on the play, especially not with no outs in the inning. The Braves sent up veteran catcher Johnny Kling as a pinch-hitter. He hit a hot shot down to McKechnie at third base, who checked Titus back to the bag before completing the 5-4-3 double play. Catcher Bill Rariden hit one to third base and the Pirates went the tougher route for the out, with the throw coming home, where Gibson applied the tag on Titus for the final out.

Boston had another rally in the ninth inning. Warner hit Ed McDonald with a pitch after  he retired the ninth place hitter, pitcher Ed Donnelly, for the first out. Normally you would wonder why the relief pitcher batted in that situation, but Donnelly was hitting .314 at the time. McDonald got to second on a ground out by Vin Campbell, then Bill Sweeney was walked intentionally. That’s right, Fred Clarke walked the third place hitter to bring the tying run up in the form of the cleanup hitter. George Jackson had two career homers at the time in 107 big league games, and one was an inside-the-park homer. So he wasn’t a home run threat, but it still was a move that made no sense. Jackson didn’t exactly make them pay, though he did get on base, hitting a slow roller that just got by McKechnie at third base. Honus Wagner managed to keep the ball in the infield to prevent a run from scoring. With the bases loaded, John Titus hit a long fly ball to center field that Ed Mensor ran back and caught for the 3-0 win.

What makes this game so interesting is the praise that Warner received afterwards for his shutout victory. One scout went as far as saying that he was the best left-handed pitcher to join the National League in a long time. The papers were sure that the young pitcher had a bright future with the team. However, the Pirates had 61 games left on their schedule and he didn’t make another start all year, only pitching in relief during six games, which were all losses. In fact, Warner didn’t even pitch after 1912 because the Pirates tried to send him to the minors for more seasoning and he only wanted to play in the majors. So this shutout ended up being his final start in pro ball, not just the majors. 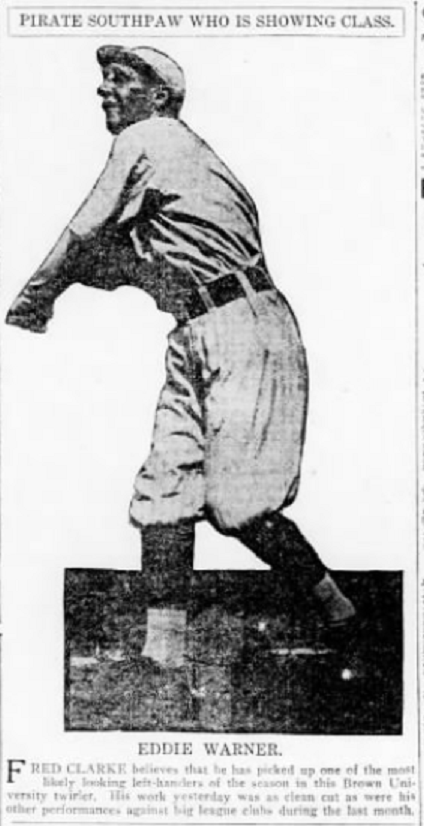