On August 2, 1900, the Pittsburgh Pirates and a team from Atlantic City played the first of two scheduled exhibition games. The Pirates had two days off between a series with the Brooklyn Superbas (Dodgers) in Brooklyn and a home series against the Philadelphia Phillies. Instead of taking off on a Thursday and Friday, they schedule two exhibition games, which were designed to help the team get some extra cash.

The Atlantic City team was referred to in the paper as the collegians, and their pitcher Skeeter Dent reportedly had not lost a game all season. There is no play-by-play available from the game, but we do have a boxscore and some brief game descriptions from various papers. Before we talk about the game, I thought I would share this clipping from a Philadelphia paper, which received a live report from Atlantic City.

As you can tell from that recap, the team of Collegians shocked the big league club, sending them to defeat behind their little twirler named Dent. That’s the full recap you see there, the only word cutoff after “The” in the final line is “score”, which was the intro to the boxscore, which I included below.

Here is the boxscore: 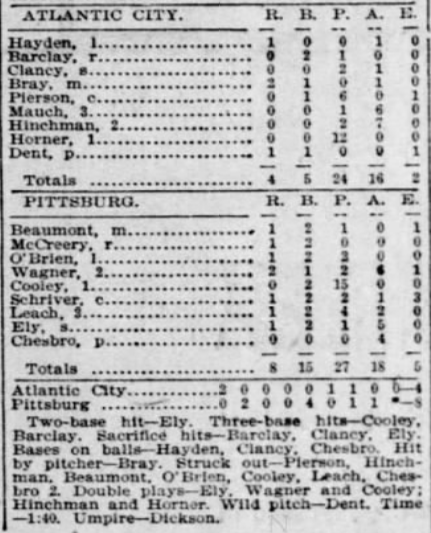 That’s not a misprint there. The game recap you read above was talking about an 8-4 loss. I bet you weren’t expecting that. As you can see, the Pirates piled up hits in their eight turns at the bat. Seven of the players had two hits and that cleanup hitter named Honus Wagner was the only player with one hit. In the ninth spot in the order, Jack Chesbro had no hits. Obviously Chesbro is a pitcher, but it’s interesting to see that the two future Hall of Famers were the only players not to collect two hits for the Pirates. Wagner hit .381 that season, while Chesbro was a .197 career hitter

Chesbro pitched a good game, depending on which recap you read on the same page of the Pittsburgh Post-Gazette that came out the next day. In the game report they say that none of the five Pittsburgh errors affected the scoring in the game. In the game notes they say that the poor defense behind him (technically in front of him as well with three errors from the catcher) made the game closer, as the “five errors were largely responsible for the four runs secured” by Atlantic City.

While the Atlantic City report was obviously very home-friendly, the Pittsburgh papers also paid the team some praise, saying that the only reason that the game was this close was because Atlantic City played outstanding defense. The left side of the infield apparently made some great play, with Mauch at third base and Clancy at shortstop getting the most praise. Since Atlantic City wasn’t a minor league team, I’d have to do some research to get the actual names (using last names only was very popular back then in print). Mauch could be a minor league journeyman named Al Mauch, while Clancy could be William Clancy, a minor leaguer during the 1897-99 seasons in the New England area. Neither player has stats for the 1900 season, and both normally played the positions that they played in this game.

One of the great notes from this game is that Honus Wagner played second base. The papers made mention of that because he was the team’s everyday right fielder. They also noted that he has played everywhere on the field except catcher and shortstop, and his friends and fans thought that he should try out catcher. Basically they were saying that the greatest shortstop in baseball history should try catching before he ever plays shortstop in a big league game. Thankfully for the Pirates, he tried shortstop in 1901 and was pretty good at it.

The two teams were scheduled to play a second game the next day and they were able to get as far as pregame practice before the rains came and made the field unplayable. It was said in the paper that the crowd at Inlet Park was a sellout and the inability to play that day cost the Pirates $400.

One other amazing note from this game is that the Pirates were playing with a skeleton crew. Manager Fred Clarke wasn’t there. He went home early, taking along with him catcher Chief Zimmer, second baseman Claude Ritchey, and pitchers Sam Leever and Deacon Phillippe. That’s an impressive array of talent. It needs to be noted that teams didn’t have 25/26-man rosters back then. They could have that many possibly in September if they wanted to try out some new players, but in August of 1900, that was not a thing. So taking away five players from the club really left them short-handed. In fact, the Pirates only used 26 players during that entire season, and they weren’t all on the team at the same time. Three of those 26 players hadn’t even yet made their big league debut before this game, and they weren’t with the team yet that day.

The biggest proof of how short-handed the team was that day is that Duff Cooley played first base. He played his final game with the Pirates on July 21st, and he was released 33 days later. This game versus Atlantic City was his only game during that time. It might not be surprising to find out that Cooley was released to Atlantic City on August 23rd. As you can see from the boxscore, Cooley had two hits (including a triple) and handled all 15 plays in the field, which doesn’t sound like a big deal now unless you know what a first baseman’s glove looked like back then. He had timely hits in the game, driving in four runs, but that wasn’t enough to get him another game with the Pirates.