Today’s Pittsburgh Pirates Card of the Day subject is Freddy Garcia, a name from the past who many of you either won’t remember/know, or he is just vaguely familiar. His bio is in today’s history article, but the brief rundown is that he played parts of four seasons with the Pirates (1995, 1997-99) as a third baseman and left fielder. He debuted at 22 years old and he played just two big league games after leaving the Pirates during the 1999 season. He was a Rule 5 pick, with the Pirates no doubt looking at his power potential, which never really translated to the majors. As you can imagine, he didn’t play much during the 1995 season, when he was making the jump from the New York-Penn League to the majors. The Pirates limited him to 66 plate appearances over 42 games. However, once his Rule 5 requirements were satisfied, they sent him back to a more suitable level so he could work his way back to the majors. Today’s Card of the Day is his 1996 Bowman card, printed during a season in which he played the entire year at High-A Lynchburg. 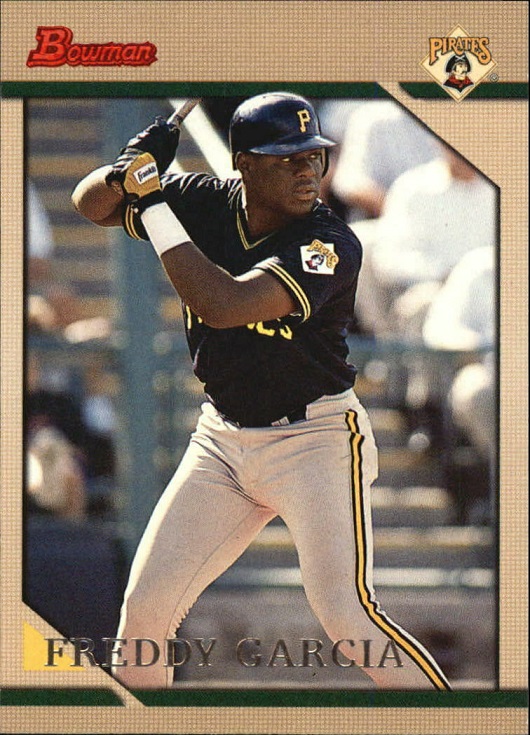 I’m a fan of this front design, which is one of the reasons that I chose this card for Garcia today. I didn’t have to include a rookie card for him, it just worked out that way because this is the card that really caught my eye. It has a feel of the 1968 Topps set with that border color, and that’s one of my favorite Topps sets from the 1960s, so that might be the real selling point for me. They included a Pirates logo in the top right corner, so that always helps (though it doesn’t need to be in the top right corner to help). I like the Bowman company logo as well. Not a real selling point like the border or Pirates logo, but it adds a little nice touch. This is a nice batting pose of the young Garcia, and you see that same Pirates logo on the jersey sleeve. 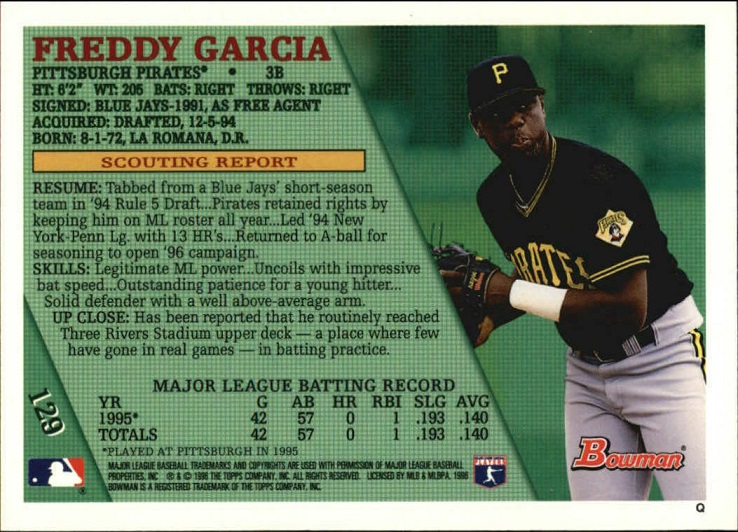 The back gives you a second photo of Garcia, which is a nice contrast to the batting pose on front. The back has a nice little bio, complete with his resume, skills and the up close section that gives an example of his prodigious power. He didn’t homer during the 1995 season, but he apparently impressed everyone during batting practice. The back also notes that besides power, he was a good defender, with a strong arm. In the resume section, you’ll note one small detail that tells you a little about when these cards were printed. Most cards came out before Opening Day during this time, but the Bowman set clearly came out afterwards, as they make mention of him going down to A-Ball to start the season.

This card isn’t rare, but there aren’t a lot of them listed on Ebay either. You have nine choices and three of those are the foil version, which is tougher to find than the base card above. I’m not a fan of the foil version here, especially since I like the front design. The foil is supposed to be nicer, but to me it makes the card look dull. However, you may like that version more and it can be had for as little as $2.59 delivered. There are six base cards available, but one is autographed and that’s going for $18.99. The lowest price on the remaining five cards is one that is listed for $1.98 delivered. As always, happy collecting!