Today’s Card of the Day features a Pittsburgh Pirates pitcher who debuted in the majors on this date in 1992. Tim Wakefield came up to the Pirates just two days before his 26th birthday and he pitched a complete game over the St Louis Cardinals, striking out ten batters in the 3-2 victory. He was an instant hit with the fans due to his immediate success and his knuckleball, which led to his success. It also led to his quick downfall with the Pirates, but he eventually bounced back and won exactly 200 games in his big league career. Wakefield was a popular rookie card due to his 8-1, 2.15 record with the Pirates in 1992. He also won both of his starts in the National League Championship Series against the Atlanta Braves. That gave collectors high hopes that he would be a star in the majors for years to come.

While Wakefield had the benefit of playing for some great Boston Red Sox teams, and he had just four seasons with an ERA under 4.00 in his 19-year career, winning 200 games in the majors is quite an accomplishment. He may not have been the pitcher that fans saw during his amazing rookie season, but he still had an impressive overall career. So today we go back to one of his more popular rookie cards, with a look at the 1993 Fleer Ultra Tim Wakefield. 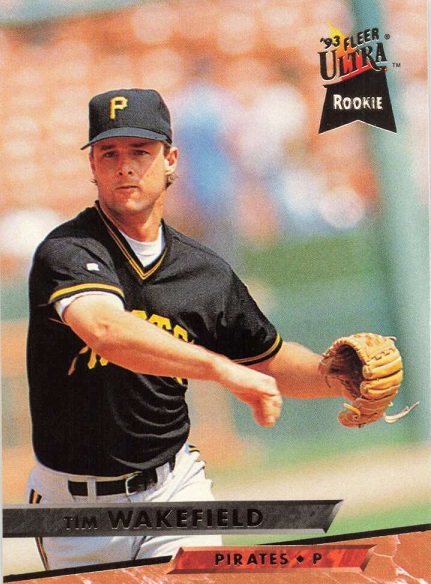 These cards had great photo quality for the era and they were part of the new fad at the time to go with borderless photos. The only thing I don’t like with them is the name part. The bigger scan here hides the flaw that is easier to see (or not see) in person, and that’s basically making the name color the same color as the name plate. I never understood the thought process going into designs that have that flaw, but it’s not just this set. Anyway, the rookie cards in this set really stand out more due to that logo in the top right corner. The only thing missing on the front is on the back…. 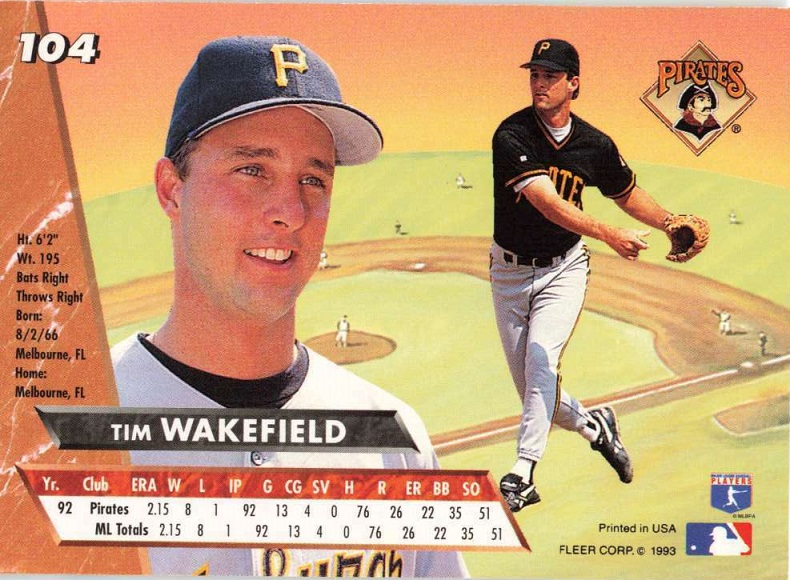 As much as I like the front design here, the back design is even better. I love the old school scene in the background, it gives a shiny card a great touch. You have two more photos of Wakefield here, though the one just looks like a different angle than the front photo. The Pirates logo, absent from the front, is there in the top right and it always adds extra bonus points. I’m usually not a big fan of the one year of stats on cards that were printed after the early Topps cards switched to full stats. However, it works here because more stats would have blocked more of that great background. In this case, only minor league stats were missing, but obviously veteran players could be missing 15+ years of big league stats. Carlton Fisk is in the set and he had stats going back to 1969 at the time, but he got just one line of season stats to go along with the career totals. As I said though, it works.

There are currently 32 examples of this card for sale on Ebay. It’s his rookie card and a great looking card from an era where every player has multiple choices if you just want one of their rookie cards. Some of those rookie cards will appeal more to collectors, either based on looks or scarcity. This one falls into the former category, as all regular issue sets were being overproduced at this time and limited number inserts weren’t a big thing yet. The most expensive one for sale currently is $34 delivered (has a “make offer” option) and that example is the only one on Ebay that is autographed. The rest range in price from $16 (don’t pay that much) down to $1.64 delivered, though someone has one for $1.65 with a make offer, so you could get it cheaper, assuming they will take more than one cent off of their price. There are nine closed auctions over the last three months and the average price is $2. One person sold one for 99 cents delivered, which is a very nice price. Happy collecting!