I almost always try to match the Card of the Day subject up to the Pittsburgh Pirates History article from earlier today. Since that’s the case, today’s Pittsburgh Pirates Card of the Day could have been one of a huge number of players. There are eight former Pirates born on this date. It’s true that not all of them have cards with the Pirates, so it was a little limited there. However, July 30th is a very popular day for trades to be made, seeing as July 31st has been the trade deadline for quite some time. I ended up going with a player born on this date, mostly because he was a member of a World Series winning team and he hasn’t been in this series yet. Today’s Card of the Day is outfielder Vic Davalillo, who is card #785 in the 1972 Topps set. 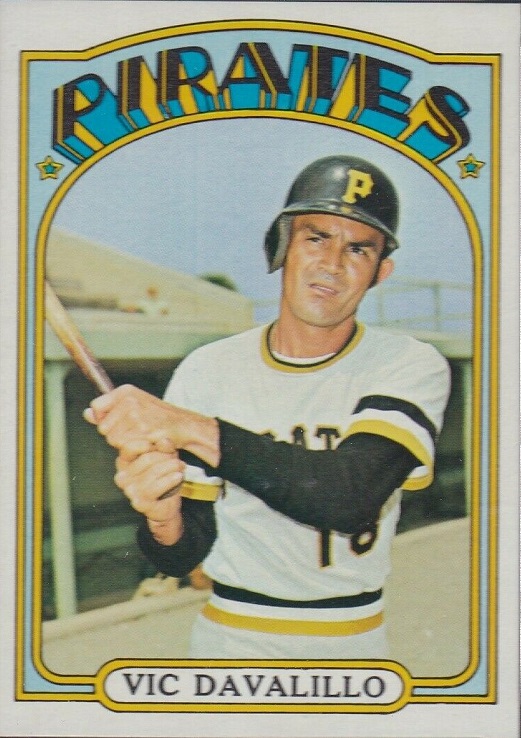 The 1972 Topps design is one of those designs where I can see it one day and like it a lot more than I do on other days. It will never be up there with the 1970-71 sets, nor the 1974 design, which I also really like, but it certainly represents the 1970’s well. Not every card in the set has these same colors on the front, but all of the Pirates players do…sort of. I don’t know if it was intentionally done, but the coloring is a bit darker for some Pirates players, especially the yellow/gold you see around the photo, which is orange on many players. It can range from a deep orange to a bright one. I don’t know if that was a quality control issue due to these cards being printed in different series, or they intentionally changed it up a little. The ones with the gold/yellow in the border look better to me because it matches the Pirates colors. The Bill Mazeroski card, which is also from the high number series, can be found often with the gold/yellow borders and it’s one of my favorite cards from the set. 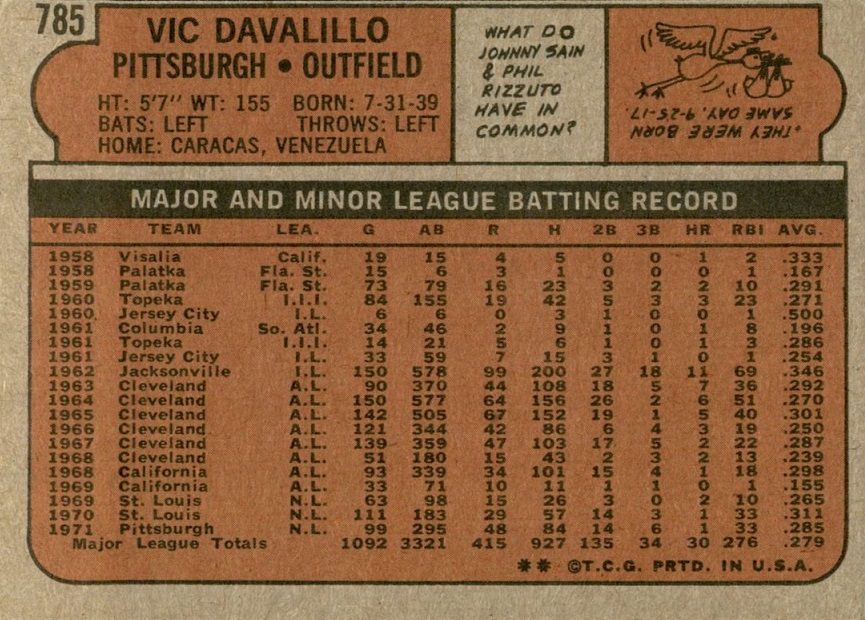 The first thing to notice on the back of the card here is his birthday. I don’t know exactly when it changed, but I had Davalillo in the July 31st history article last year for his birthday and I check them every year to make sure I have covered everybody. This year I checked the previous July 30th article and then checked the birthdays and noticed I was off by one player, which turned out to be Davalillo. Considering that he started playing in 1958 and he turns 82 today, he’s been going for a long time with his birthday being off by one day.

I’m a big fan of Topps including minor league stats for the veteran players. They could have just decided to go with nine years of big league stats here, but they went all the way back to his humble beginnings in the Class-C California League and Class-D Florida State League, where he probably debuted right around his 19th birthday.

The card is from the high number series, which were released at the end of the year and produced in smaller quantities, mostly because interest in the set had weakened by then. That makes these high numbered cards very popular today, with a price to match. While you can get common cards from this set all day long for $3 delivered, this particular card has just 12 examples for sale. Two of them are auctions that will be done before you see this article. Demand far outweighs the supply here, as 40 auctions have sold in the last three months. Rarely do you see the sales amount exceed the active auction amount. One seller must have sold a card not knowing it was a high number because the price was $2.80 delivered with a buy-it-now option. The next lowest price is $8.61 for a sold auction. The highest price for a sold one is $53 for one in outstanding condition.