We have featured Jack Wilson in our Card of the Day series once before, just over a year ago when we took a look at his 2009 Topps Heritage card. The Pittsburgh Pirates traded for Wilson on this date in 2000. Exactly nine years later, he was traded to the Seattle Mariners. That makes it a good day to have our second Jack Wilson Card of the Day. Since we went with a card from his final season with the Pirates last time, how about we look at one of his first cards with the Pirates from the 2001 season. This is from the Upper Deck SPx set, and it includes both an autograph and a piece of his actual jersey. 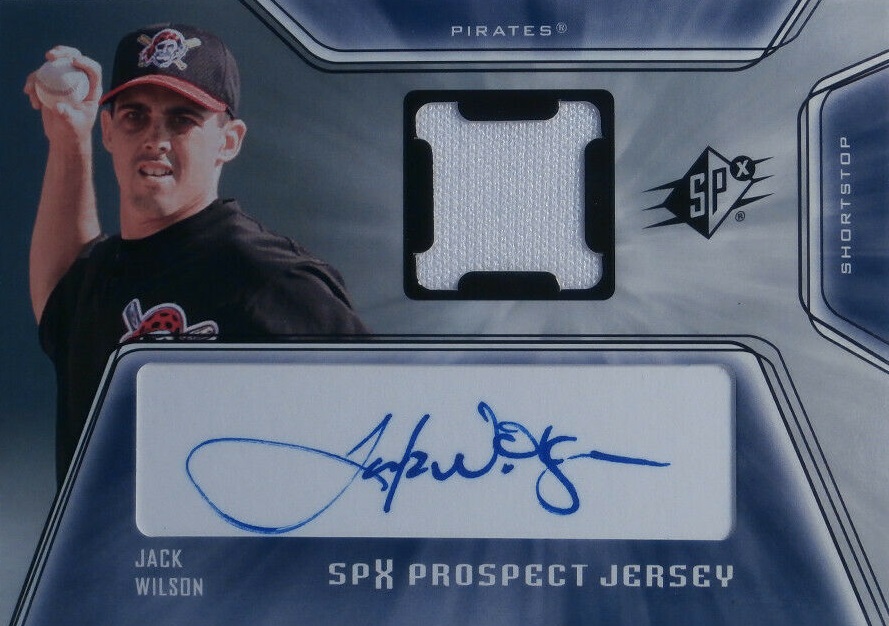 You might find this hard to believe, but that Jack Wilson autograph that looks like it says “Julz W.gc-” is actually much better than the first scan I attempted to use. That one was a smaller photo and didn’t look as good when I enlarged it, though the autograph was somehow easier to read. Along with the autograph of Julz W.gc-, you also get a piece of one of his jerseys in that little square box. These jersey/autograph combos were extremely popular when they first came out, but unless the player was great throughout his career, they didn’t really hold much value, though some people try to charge much more for their cards (see the sales section at the bottom).

Since Wilson remained in the minors for the rest of the 2000 season after being acquired, the first time he actually appeared in a Pirates uniform was Spring Training of 2001, when he won an Opening Day job. So any of the cards that came out early in 2001 didn’t have photos of him with the Pirates yet. This was a later release as you will see below in the section about the back. Upper Deck had a nice action shot of the 23-year-old Wilson here.

This card proves that cards don’t need to make sense to have eye appeal. I’m a fan of this look, but I have no idea what it’s supposed to represent. The dark blue “box” up top could fit about 7-8 team names in there, but all they have is Pirates written small and not even centered. Then the side box has “shortstop” written vertical from bottom to top. His name is scrunched into the bottom corner too. I like the SPx logo at least. As I said, it doesn’t make much sense, but it has eye appeal and that’s all that matters. Honestly, between the photo of Wilson, the jersey piece and the autograph, they draw all the attention away from the rest of the card. 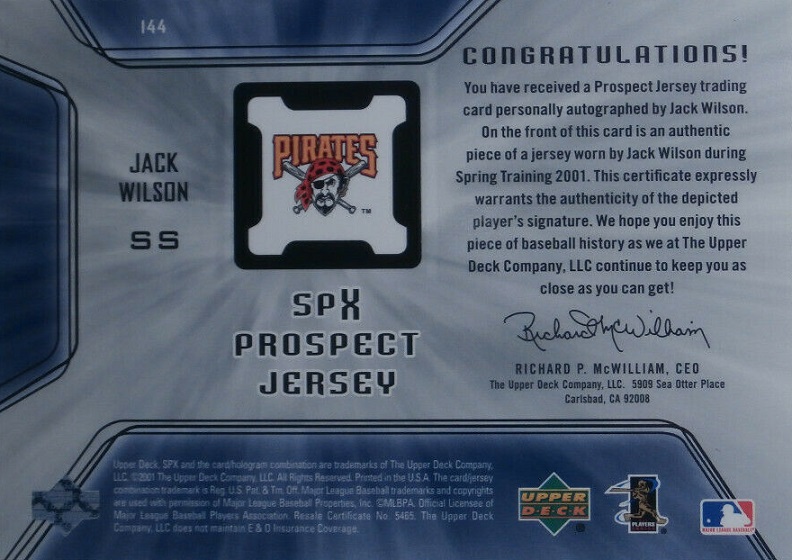 The back congratulates you for the card that you purchased and it’s facsimile signed by the CEO of the Upper Deck Company, Richard McWilliam. It lets you know that the piece of jersey on front came from one that Wilson wore during Spring Training of 2001, and it also tells you that the Wilson autograph on front is authentic. The backs of these cards are fairly boring because they all have the generic guarantee, along with all of the legal mumbo jumbo at the bottom that no one reads. Don’t try to read it, you’ll hurt your peepers. Anyway, the back gets saved here a bit because of that terrific Pirates logo in the middle. That always adds bonus points.

There are a few of these for sale, so they aren’t extremely rare, but the autograph/jersey combo makes them somewhat collectible and keeps the price higher…at least on buy it now auctions. One of these recently ended for 99 cents plus shipping in a regular Ebay auction. If I knew about it, I probably would have bid, so I apologize to that seller. The ones currently listed are going for $29 delivered, $21.25 (with a make an offer option) delivered, $16.99 delivered, and one seller has two priced $8 and $11 respectively, both prices include shipping.