Today’s Pittsburgh Pirates Card of the Day is the first one to feature Brian Giles. He probably should have been here sooner. We have been doing this long enough that not only did his birthday pass once, the dates that the Pirates acquired and traded for him have also passed. Today’s inclusion coincides with today’s history though. On this date in 2001, the Pirates were down by six runs with two outs in the ninth and his grand slam gave them a 9-8 victory in front of 33,000 fans at PNC Park over the Houston Astros. I can guarantee that Giles will show up in this series again before 18 months pass. He has a lot of cards to choose from showing him on the Pirates, and his run with the team makes him one of the best sluggers in franchise history. We start off his Card of the Day time with the 2002 Fleer Tradition set, so here’s card #75, Pirates All-Star outfielder Brian Giles. 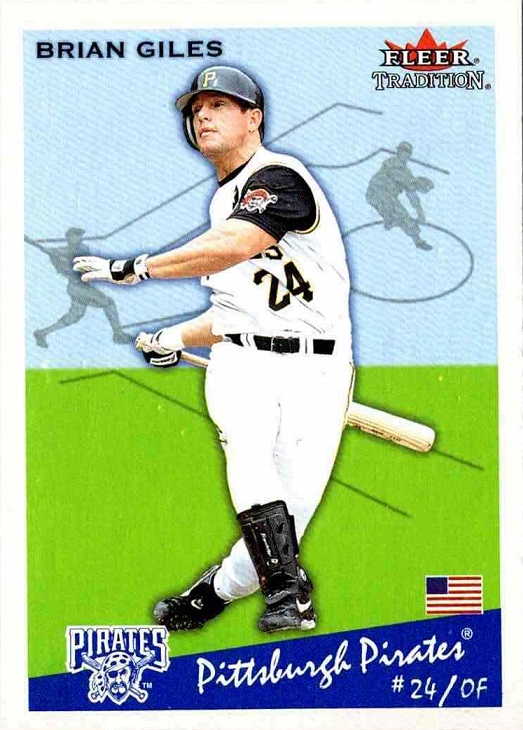 This clearly isn’t the most flattering pose for him. It appears that he is striking out. Maybe he fouled a ball off though, so we will give him the benefit of the doubt. This card is based off of the design of the 1934 Goudey set. It’s not exactly like that set. On the original cards, the bottom had a picture of Lou Gehrig, with the words “Lou Gehrig says…” and there was a scouting report on the back that was supposed to look like it came from Gehrig himself. There were also cards with one-time Pirates outfielder Chuck Klein, with “Chuck Klein says…”, but those cards are harder to find and they came with a red band across the bottom.

In place of the Lou Gehrig stuff, Fleer put the team logo, team name, jersey number and position. The also added a nice touch of an American flag, especially nice considering that these cards were being printed in late 2001. The background of a baseball scene and grass(?) with weird lines is direct from the Goudey set, and there were different scenes throughout the set. The Goudey cards also had the player’s name up top, similar to what you see here. 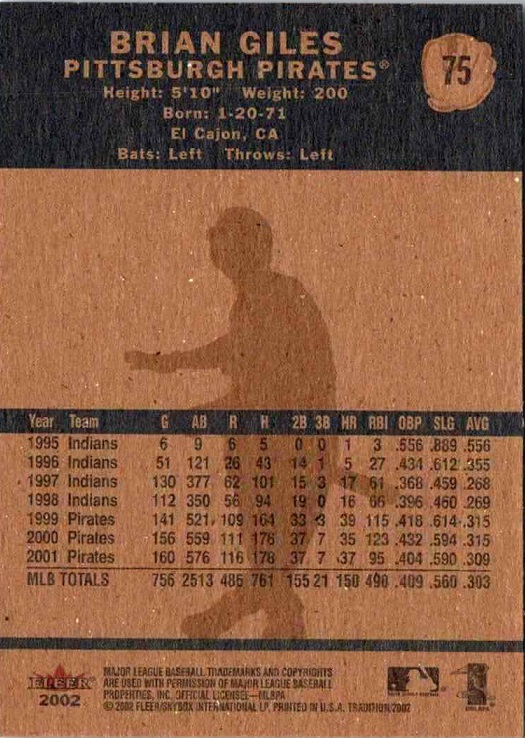 I bought these cards new, which was 19 years ago now. I don’t remember if I noticed it back then, but I wasn’t seeing the front and back of cards at the same time back then when they were in my hand. I noticed here that the shadow of the player in the middle is the same pose as the front. It wasn’t a coincidence here. All of the cards had that same shadow pose as the front. As I mentioned, the front here is a tribute to the 1934 Goudey set, but the back is all original. There’s really no similarity between the two sets. It would have been a nice touch, but I guess without the photo of a player on the front teasing at a scouting report, then you don’t really need a scouting report on the back, though that large blank space is wasted here.

If you’re interested in this card, you’ll pay a little more than a common card in the set. Fleer short-printed the first 100 cards in the set and they are about twice as hard to find than the other 400 cards in the set. That adds value to the first 100 cards, but it’s not a large increase. What I suggest here is paying $2-$3 extra (instead of paying $4-$6) and get the Pirates team set. There are two other Giles cards in the set, there are other short-printed cards, and you get 20 cards total, including a Derek Bell card! Just a warning though, the Bell card might leave at some point, but you’ll still have 19 cards left.