I usually pick a Card of the Day that has something to do with that same day’s This Date In Pittsburgh Pirates History column. Today’s player is Enrique Wilson, who played for the 2000-01 Pirates. He turns 48 years old today. Whenever I don’t have a specific card in mind, I’ll scroll Ebay to find something that catches my eye. This is the first time for Wilson in this series, so I basically had any card of him on the Pirates to choose from for my subject. Little did I know when I made that choice that after nearly 18 months, this is my first card from any 2001 set. That seems impossible to me. I try to switch things up all of the time here, though I hit the popular sets more often than others. So how did I miss an entire year before today? I have no idea, but I can bet that it won’t be another 18 months before the next one. Anyway, here’s a 2001 Topps Heritage card of the birthday boy, infielder Enrique Wilson. 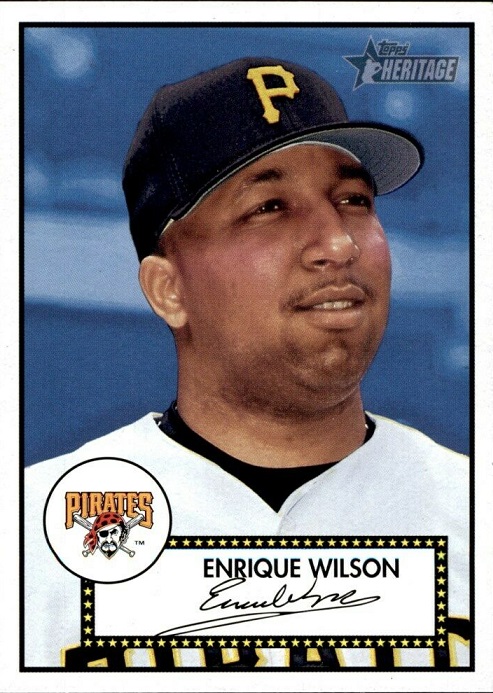 This card design is based off of the iconic 1952 Topps set, the company’s first full set of cards. Those cards had the same setup as you see here, with white borders and a black box around the photo. At the bottom you see the team logo and the player’s name and a facsimile autograph in a box with stars all around the border. Topps used real photos here, while the original used artwork based off of a real black & white photo, basically a colorized photo. Topps didn’t have a logo on the front of these cards in 1952, but the newer ones used the Heritage logo. 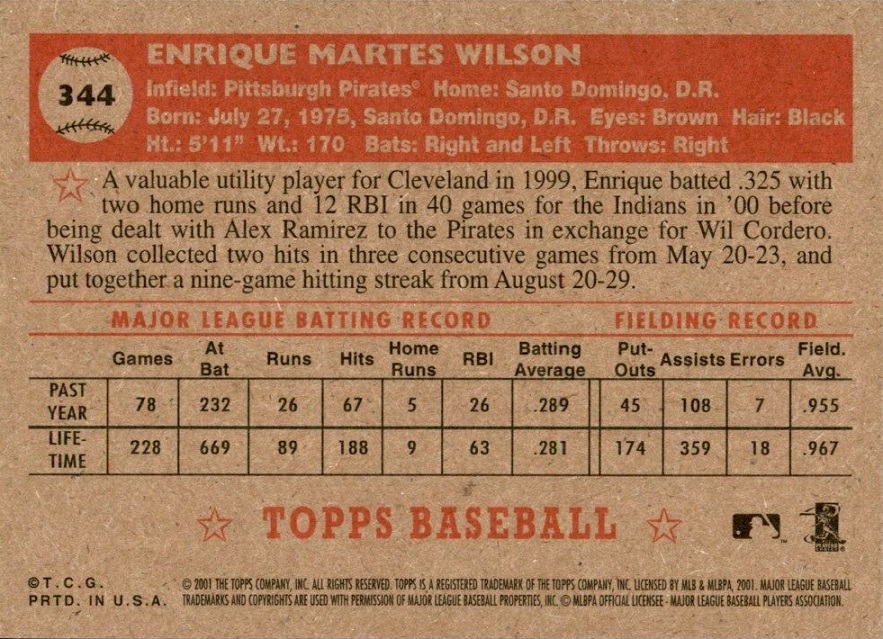 The back there says that he was born in 1975, but his birthday is recognized as 1973 now. That wasn’t a mistake on his card at the time, all of the cards I checked have the later birthday. This back also used the 1952 design, with the same set of stats, including the four fielding categories. The stats sections also similar in that both years only including the last season and career stats. That left room for every player to have a little bio/highlights section above the stats, regardless of how long they played in the majors up to that point. That would change in later years.

I guess I never really noticed the layout up top, which is the same on all cards. I originally just read that as “infielder, Pittsburgh Pirates”, but when I was going to talk about his defensive stats I went back up to see which position they listed for him. Wilson played a lot of third base, shortstop and second base in his career. That’s when I didn’t just skim through the bio and noticed it said “infield: Pittsburgh Pirates”. Seems like an odd way to write that, but that’s what they did in 1952. If someone played outfield, that’s also how they wrote it instead of calling them an outfielder. If you’re wondering, pitchers and catchers don’t say pitch and catch. Topps did identify some infielders by specific position, but in the case of Wilson, the word infield makes more sense.

One other quick thing to point out and it’s the “eyes and hair” section. That’s from the original set, and something that Topps didn’t do for long, but it’s a cool item to see on the tribute card 49 years later.

You’re probably assuming that the section down here will say that you can find this card on Ebay in the $2-$3 range delivered and there are numerous options in that range. You have a lot of nerve jumping to conclusions like that! This card is a short print, or in non-collector terms, they didn’t print as many of these cards as they did for other cards in the set. There aren’t a lot of options for this card and you’ll be paying around $6 delivered. If you want one still after hearing the price, go and get it now, because if someone else reading this article also wants one, you’ll be paying extra money because you waited. Happy collecting, sorry to snap at you for jumping to conclusions.