I’m not even sure how I came across the scan of this card while searching for something else, but once I found it I knew that I had to feature it as soon as possible. This is the first card that I’ve included here that doesn’t have a Pittsburgh Pirates player on it. However, it still qualifies as a Pittsburgh Pirates card. I’m going to keep the set up short and get right into the scan of today’s Card of the Day, which comes from the 1993 Donruss Leaf Triple Play set. This is card #164 in the set, titled Mascots. 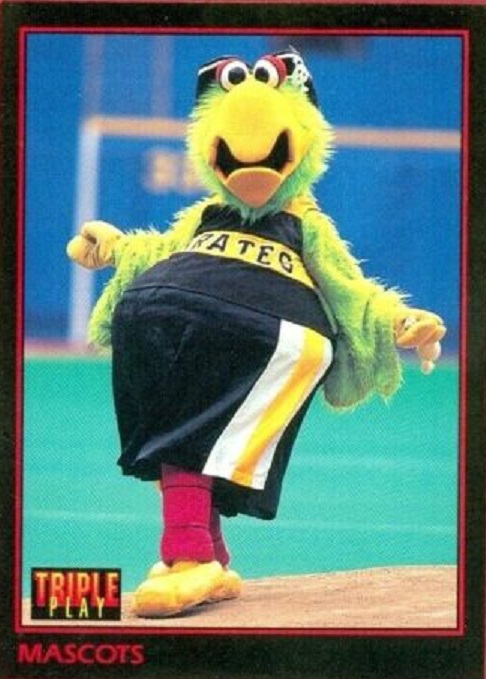 Yesterday’s Card of the Day choice was one that featured Doug Drabek and I referred to it as “silly” multiple times. So I can’t use that word again today, so maybe “goofy” is a better choice here? This is obviously the Pirates Parrot, circa 1992. However, this is not a card specifically for the Pirates Parrot, he just ended up on the front, making it eligible for our Card of the Day series.

This picture is ridiculous, but it also shows how much the Parrot has changed since then. He looks like he’s in the middle of dancing to an exercise video and realizes he’s on camera, just as the photo was taken. This was a decent looking set design, but it looks better with the actual players on the card and not the Aerobics Parrot.

Here’s the back of card: 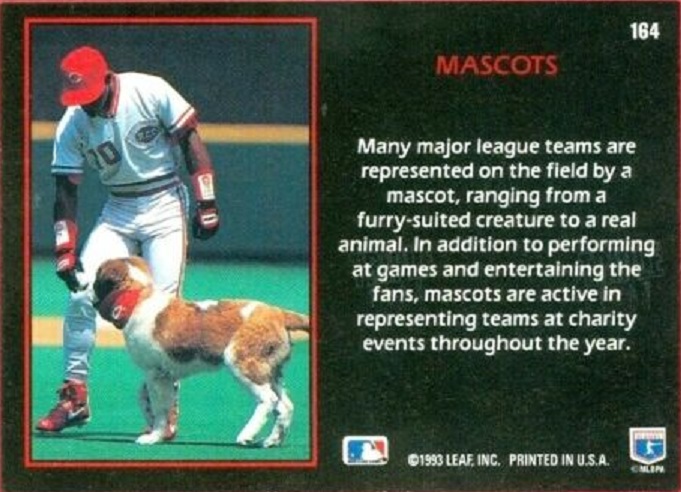 As you can see by the back, this card isn’t just for the Pirates Parrot. They don’t mention it on the card here, but that photo shows Cincinnati Reds dog mascot Schottie and I believe the player is Bip Roberts, who was a draft pick of the Pirates, so you could technically say that there is a Pirates player on the card, even though all of his time with the team happened in the minors.

The back of this card actually tells you what a mascot is and what they do for the team. They range from a furry-suited creature to a real animal. I’d love to know what is in between those two end points. Back in the day, mascots were usually little kids dressed up like a player. We have covered the N172 Old Judge set from 1886-90 in this feature multiple times. Two of the cards in that set shows team mascots with star players and they are very valuable cards. Two other cards shows just the mascots and both are valuable, though one is a bit more difficult to find.

Anyway, they didn’t run out of card ideas before they came up with this gem. This Triple Play set was meant for younger kids learning the game, so the mascot description you see is meant to inform a young kid. As you probably know, card collectors come in all ages, so these cards mostly fell into the hands of older kids and adults.

Not much to say here in the price guide section. There are currently 11 examples of this card for sale on Ebay and at least three of them can be had for about $2 delivered. Maybe you want a 28-year-old card of the Pirates Parrot, who knows. Whatever you decide, happy collecting!