I had a plan to be all “business as usual” with this article, picking Doug Drabek today because it is his birthday. I even had a card picked out before I saw it because there’s a set left on my “to do” list before we get to month 18 of this series (nothing exciting is happening in month 18, don’t know why I said it like that). I was just going to head to Ebay, pull front and back scans and then see if anything special was either currently listed or had recently ended. My plan changed because I wasn’t more specific with my Ebay search, going for just “Doug Drabek Pirates”. So now that set I had planned out gets put on the back burner until another player from it pops up, and instead we go with a card that borders on silly. This here is the 1991 Score All-Star Doug Drabek card. 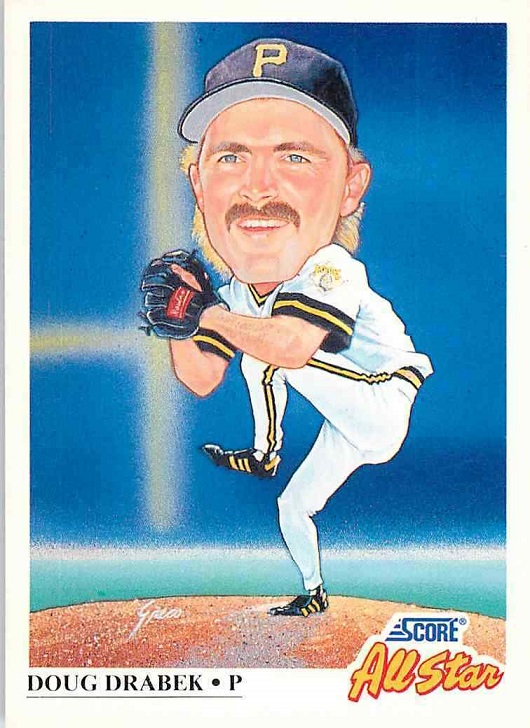 I think the term “silly” is a good one for this card. It’s basically a county fair/boardwalk caricature drawing of Drabek, which is actually a good likeness of him. Yet at the same time this card is supposed to be celebrating him due to his All-Star appearance during the 1990 season. Wait, I’m being told that this is actually an All-Star team picked by Score, consisting of ten players, including a starting pitcher and a relief pitcher. They just used the term All-Star for their own team, even though there was an actual All-Star team picked by baseball and the fans. Anyway, Drabek seems like a great choice here. He helped the Pirates to their first pennant in 11 years and he won their first Cy Young award since Vern Law picked up the 1960 trophy for helping the Pirates to their third World Series title. He had a 22-6, 2.76 record in 231.1 innings during that 1990 season. This might come as a surprise to you, but Drabek was never an All-Star while with the Pirates. He only made it once to the mid-season classic, and that was 1994 with the Houston Astros. 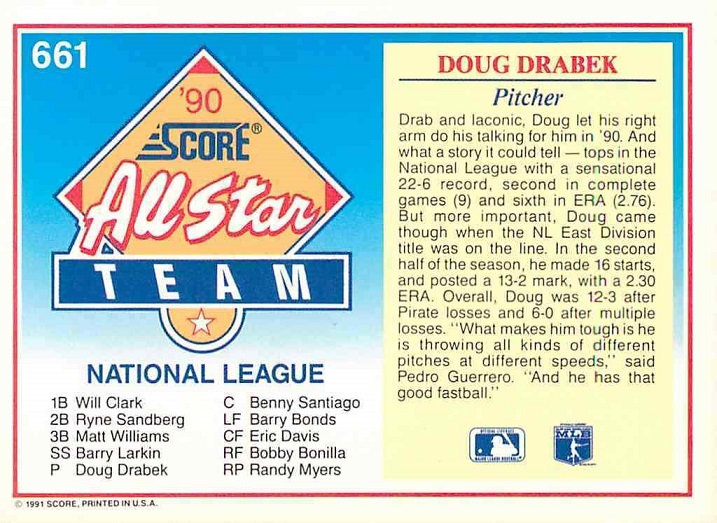 The back of the card tells you with a large logo that this card is part of the Score All-Star team for the National League. If you check out that squad, you’ll also notice two other Pittsburgh Pirates on the team, Barry Bonds and Bobby Bonilla. The other half of the card gives a brief rundown of his season, including how he stepped up after the team lost. Really he was just the ace so he was usually following the fifth starter (hence the losses ahead of him) and the 12-3 record isn’t much better than his 22-6 season record. The back also includes a quote by Pedro Guerrero, long-time corner fielder (outfield and infielder) and power hitter for the Los Angeles Dodgers. He said that Drabek excelled due to a good fastball and the ability to change speeds, along with a large assortment of pitches.

I assume you want this card because who wouldn’t want a cartoon drawing of Doug Drabek with a giant head. There are a nice amount of options for this card under $3, which includes shipping. There’s also one graded by Beckett (BGS) that grades a 9.5 and the seller wants $109.97 for it, plus shipping. If you know someone named Kevin, there is one personalized and autographed by Drabek, which is selling for just $6.50 delivered. If you have $6.49 to spend, you can buy a lot of 50 of these cards…seriously. Plenty of options to choose from, whether you want a single card, 50 cards, a card for Kevin or a high grade card sealed in plastic.