It always surprises me when I find a major set from the modern era that I haven’t covered yet, but here we are, using the 1988 Fleer set for the first time in the 17-month run of this series. I noticed a few days ago when I posted the 1988 Donruss card (I’m sure you read that article), that I also didn’t have a 1988 Fleer set either. I have nothing against 1988, I’m sure it was a good year for those of you old enough to remember it. The Pirates were a good team, finishing second in the National League East. It appeared that 1989 could be their season, until 1989 happened (not such a good year), but it was a hiccup and then the 1990 season started a three-year run of pennant-winning teams.

On that 1988 team was a young outfielder batting lead-off, who had speed and power potential. He was rushed to the majors, so it took some time to adjust, but once he did he because a perennial MVP, which in 1991 stood for More Valuable than Pendleton. I mean c’mon voters! Pendleton didn’t even have the highest WAR on his own team and it paled in comparison to Bonds!

Anyway, the 1988 Fleer set had quite the standard to live up to that year. I have mentioned my favorite sets from decades before, but only a few years ago did I realize that my favorite Topps, Donruss and Fleer sets from the 1980s were all printed in 1987. You might not like the 1987 Fleer set as much as I do, but it’s my favorite so I always like seeing how companies follow up great designs. The 1988 Topps set is boring. The 1988 Donruss set isn’t much better. However, I do like the 1988 Fleer set, so let’s take a look at the best card from the Pirates in that set. Here’s card #322, Barry Bonds. 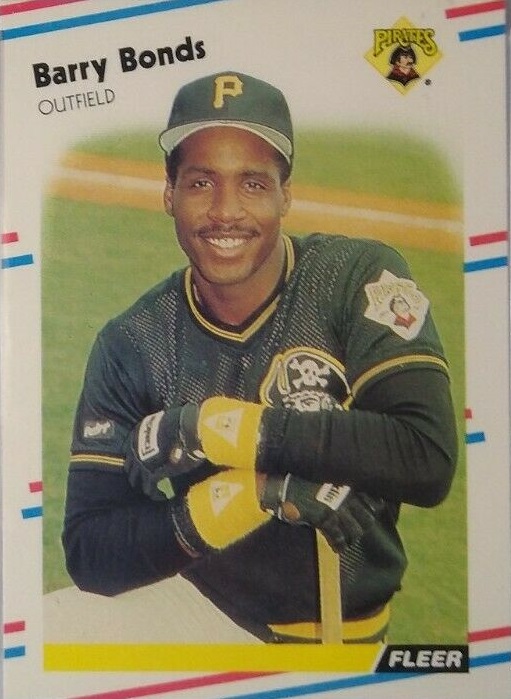 As I said, this is a nice design, not great, but okay. It looks like something that Wonder Bread would have put out during that time. What I like most here besides the patriotic border colors is the great Pirates logo on front, always a plus. There’s also a nice touch with that little gold stripe at the bottom. Fleer used team colors for those stripes, so all of the Pirates are gold. I also like how they faded in the photo up top. The Pirates uniforms from this era are going to make any card set look better, but I like the set in general. I’m a big fan of the two-player rookie prospects cards they included, so it might not be long before I feature one of the two cards with a Pirates player from that little subset. 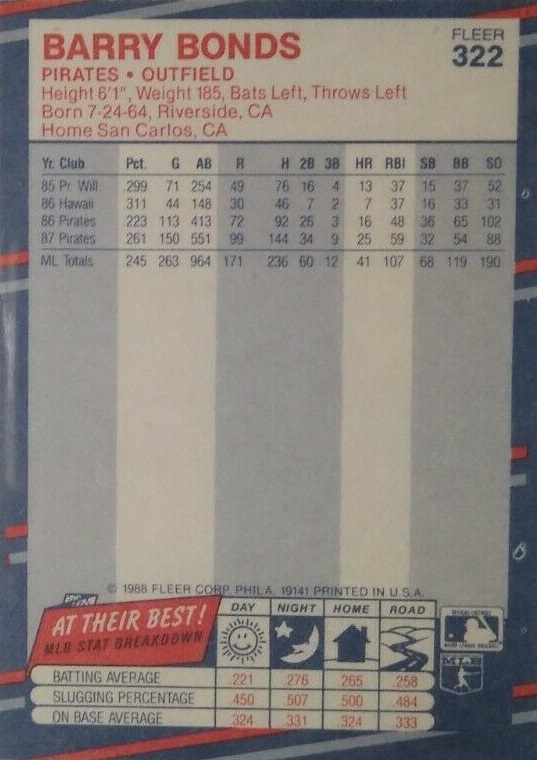 The back has some added info at the bottom that was new for 1988, showing splits in the triple slash categories for day, night, home and road. The back used darker blue colors than the front, but it has a similar look. This scan is big, so it’s easier to read, but those numbers/stats are not the easiest to read in person, especially with the thin blue-on-blue writing.

If you’re interested in this card, the supply far outweighs the demand. That’s not saying that he’s not popular among collectors, he’s actually very popular. It’s just that they printed a ton of cards in 1988, which is good for 2021 you if you want to get an early card of one of baseball’s all-time greats. You can find it readily available for as low as $2 delivered, which is basically the same as any common because most sellers don’t like selling cards for less than that amount. You have fees, shipping, supplies, time, it’s not worth it unless you’re getting something for your ten cent card. Anyway, there are a few noteworthy cards up now. He rarely signs, but there are a few and they are all $150+. This particular scan was pulled from a PSA 9 auction going for $30. One other auction is someone selling 16 of these cards for $30. Whatever you choose, happy collecting!