Today’s Card of the Day is our first from the 1986 Donruss set, though we have featured a 1986 Donruss card here before. That first one was from the Donruss Highlights set, which was a separate small set produced by Donruss during the year and it had a similar look to the regular 660-card set, just using a different color for the borders. Here’s that link featuring Rick Rhoden swinging a bat. 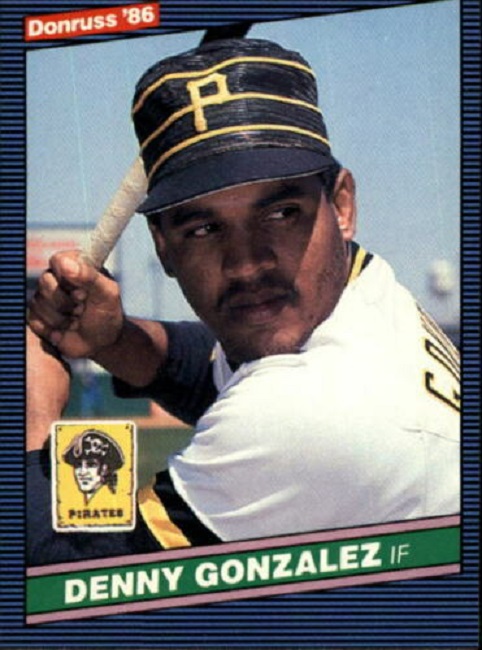 I apologize that this isn’t the clearest scan, but not a lot of people are taking the time to scan common cards from the 1986 Donruss set, opting instead for the scan that Ebay suggests for them when listing auctions, which is smaller and loses some sharpness when you enlarge the scan.  The only real problem with that is with my favorite part of the card. That old Pirates logo looks much better in person, trust me.

The design here is okay I’d say, not their best, but not the worst. Obviously I like the use of the logo on front  and the slanted name plate gives a slightly different look, especially with the photo having the same slant at the top. The pillbox cap always calls for bonus points. 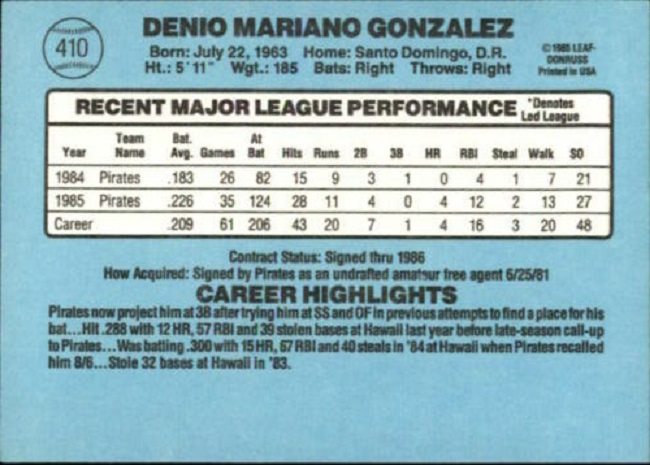 The back scan isn’t as clear either obviously, which is a bit worse than the front when you’re talking about small print. We posted a 1988 Donruss card here a few days ago and mentioned that it was basically the same back as the 1986 cards, with a few subtle differences. Donruss didn’t have much originality in their early years. That’s a bit odd to say because their first back design in 1981 was completely different from anything ever used before. Then they went to a style in 1982 that didn’t change much over the years, other than color combos. The crazy similarities between the 1986 back and the 1988 back are just strange though. Almost as if the designers in late 1987 said “we haven’t used light blue since 1986, why not bring it back!”.

Anyway, the stats here were all of Gonzalez’s big league stats at the time. Donruss didn’t mess with the minor league stats, though the Career Highlights section at the bottom talks about those minor league days for Gonzalez. One interesting part in that section is that Donruss mentioned that Gonzalez now projects as a third baseman after previous attempts to find a place for his bat. As you will notice, he didn’t do so well with the bat in those previous attempts. He actually didn’t play in the majors in 1986, though his minor league time shows 83 games at third base that year. When he came back to the majors in 1987-88 with the Pirates, his primary position was shortstop. His real value to the Pirates came on the day he left. He was traded to the Cleveland Indians for Jay Bell, which worked out great.

If you’re interested in this card, there are plenty of options for around $2 delivered, just watch the shipping costs before you buy. Some people have crazy prices for shipping regardless of the card’s actual value. Two things to mention here quickly. One is that you would be better off going for the team set for a little more than the cost of the Gonzalez card solo. The other is that two people have autographed versions of this card. One is basically half of the price of the other ($31 vs $16). Happy collecting!