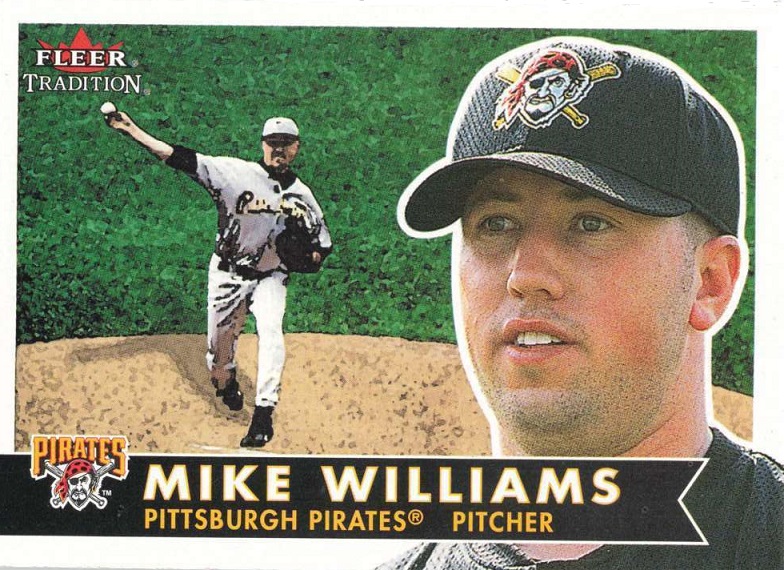 This set has a look similar to the 1956 Topps set, with the portrait style photo in the foreground and an action shot in the background, along with the horizontal layout. That action shot is Mike Williams in the middle of delivering a pitch, but that portrait isn’t him. That’s Jimmy Anderson, pitcher for the 1999-2002 Pirates, who wasn’t even in the set, though it certainly looks like he made it into the set. Williams was a two-time All-Star closer, while Anderson was a fifth starter on some very bad teams. It worked out well for him though because the Pirates being bad definitely helped him stick around longer. I should note that he debuted with the 1999 Pirates and they weren’t a bad team. It was a limited sample size (29.1 innings) but he did his best work that season.

Mistake and stolen design aside, I really like this set. The action/portrait combo worked so well in 1956, that I really don’t care who brought it back. It still works. I love the inclusion of the Pirates logo in the bottom left corner and the use of Pirates colors for the box that includes his name/team name and position is great. I wish they didn’t include the “TM” and “R” on the front, but obviously I know why they did it. I’m just saying that it would look cleaner without it.

On quick side note and it’s the hat on the two players. I know it’s an unpopular opinion, but I was a big fan of the gray Pirates hats like the one Williams is wearing. However, I was never a fan of the mesh hats that Anderson is wearing. I’ve owned over 50 baseball hats and the only one similar to that one that I have was bought for me and I don’t think I’ve ever worn it. 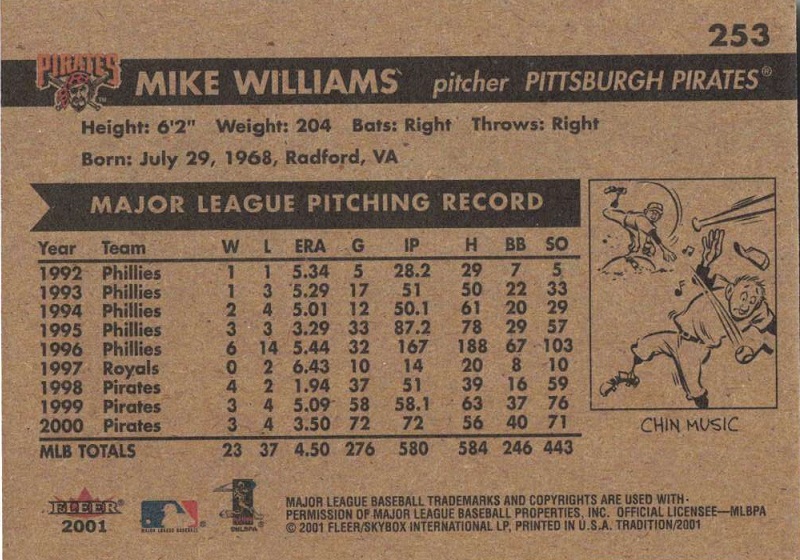 The back is not like the 1956 Topps so at least they only took half of the idea. I’ll note that I really like the 1956 Topps layout with three cartoons and the very colorful backs, and I don’t mind the stats only showing 1955 and career stats, because that’s the style that they went with at the time. They didn’t take away anything to get to that point, so it works. However, I’d much rather prefer to see all of the player’s stats because I grew up with cards like this one above. I collected this set new and I liked seeing the full stats, even if they went with limited categories here long after companies were including 13 statistical categories and they chopped it down to eight so they could add one cartoon. It’s a nice back with a modern and old-timey feel combined. Also, I can’t forget the extra credit for the Pirates logo on the back as well as the front.

I’d strongly suggest if you want this card that you just get the entire team set because Williams will cost you about $2 and the set can be had for around $5 and it includes 12 players total. If you just want the Williams/Anderson card, then there are 11 active auctions. Just watch the shipping costs before you hit buy. Some shipping costs are so high that you can actually get the team set cheaper. Happy collecting!