Today’s Card of the Day comes from a great set from pre-WWII era. The 1940 set featured current and former players, and this one was a little bit of both. Hall of Famer Heinie Manush played for the Pittsburgh Pirates during the 1938-39 seasons. His departure from the Pirates is one of the most interesting transactions in baseball history in my mind. The Pirates released him so they could sign Hall of Famer Chuck Klein. You can’t find too many cases of a Hall of Famer being released so a team can get a different Hall of Famer. Shortly after his time with the Pirates ended, GUM Inc. out of Philadelphia released the 1940 Play Ball set. Card #176 in that set featured Henry Emmett “Heinie” Manush, our Card of the Day today. 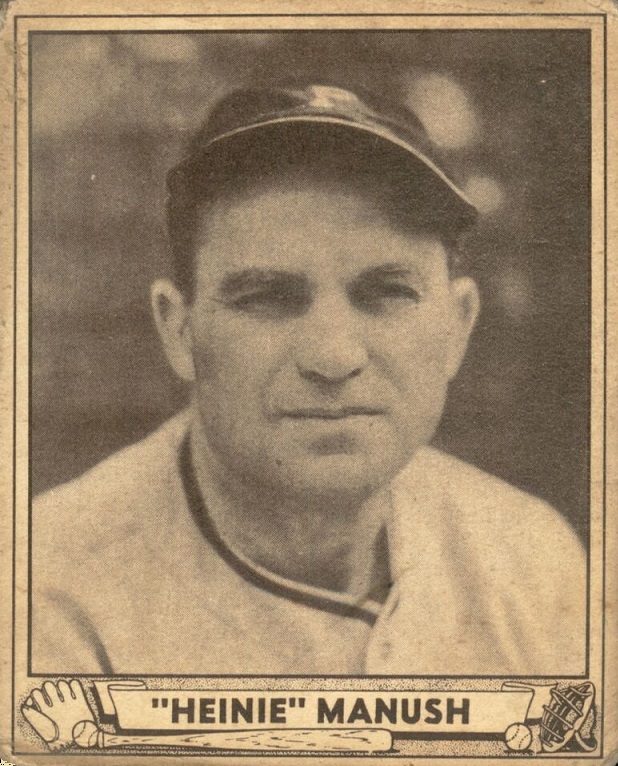 The 1940 Play Ball set features black & white photos of the players, which takes up a majority of the front. They have an off-white border color that probably made them look old even when they were brand new. The design is simple, yet nice, with various pieces of baseball equipment in the bottom border, along with the player’s name in block letters. Most times they chose to use nicknames for the players, though they used quotation marks around the names freely, such as “Ted” Williams for Theodore, and “Frankie” Frisch for Frank, two guys who were just using versions of their first name. One interesting thing is Joe DiMaggio doesn’t have that for Joseph (which the card has on the back), but his actual first name was Giuseppe.

Manush played for six teams in the majors, spending six years with the Washington Senators, five with the Detroit Tigers and three with the St Louis Browns. He had top five finishes in the MVP voting with all three teams. However, Play Ball decided to post a photo of him with the Pirates, the team he saw the least amount of action with out of his six clubs. Normally you would just say that they did that because he played with the Pirates in 1939 and this was a 1940 card, so it makes sense. However, the back tells a different story that makes it a more interesting choice… 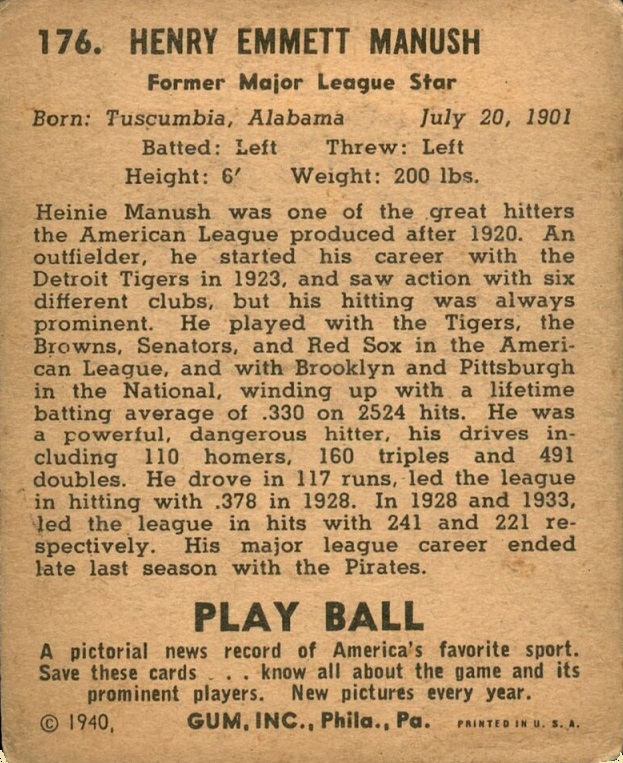 I said up top that this is both a former and current player on this card, depending on how you look at Manush. He played in 1939, so it makes sense that he has a 1940 card, especially since he was a Hall of Fame caliber player. This card notes up top under his name that he is a “Former Major League Star”, which could also be considered true.  His Major League career was over at this point, but putting that on a card was being a bit presumptuous I’d say. He played minor league ball in 1939 after leaving the Pirates, and he became a player-manager in the minors in 1940, actually playing his final pro game in 1945. If he got a big league managing job, then I’m sure he could have suited up if needed, so calling him a former player in 1940 seems like they’re trying to tell him he’s done. Since he was a former player in their mind, then that should have opened up the possibility to use any picture of him. Fortunately for Pittsburgh Pirates collectors, they chose to picture him on the Pirates.

If you’re interested in picking up this Hall of Fame card, then head on over to the land of Ebay. There were 42 live auctions when I wrote up this article and they ranged in price from $19 delivered for a very low grade example, to $139 for one that is graded 6.5 by PSA. There are 13 sold auctions over the last three months. A dozen of those have sold between $17 and $65, while a PSA 7 had a $199 price tag, though the seller accepted a lower offer on it, which wasn’t posted.