Today’s Pittsburgh Pirates Card of the Day is a first for the 1988 Donruss set, which actually surprised me when I realized that I haven’t got to this set yet before today. Our subject is Vicente Palacios, who turns 58 years old today. He played five seasons for the Pittsburgh Pirates, seeing time with all three pennant winning clubs during the 1990-92 seasons. He was a rookie in 1987, getting called up in September for his MLB debut. He made four starts and two relief appearances for the Pirates, pitching a total of 29.1 innings. He was still considered to be a rookie due to his limited playing time. That led to Donruss putting in their subset of cards called Rated Rookies. Here’s a look at card #45 from the 1988 Donruss set, Pirates pitcher Vicente Palacios 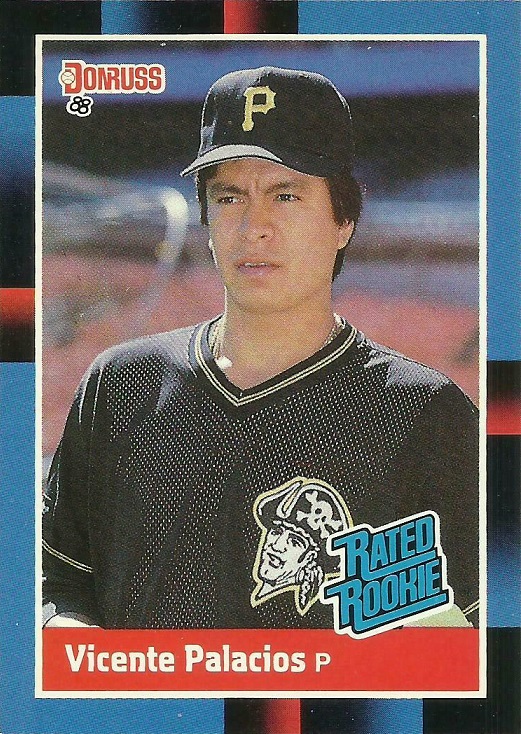 The 1987 Donruss set is my absolute favorite one from the company. It has the best front design and I also really like the look of the Rated Rookies card with the red logo that they used that year. The 1988 set must have felt some pressure to live up to that great design, and I think they did a good job here. The set has some nice eye appeal with the border design and red name plate.

You might notice that this card doesn’t have the team name on front. That’s because the “Rated Rookie” logo replaces the team logo on these particular cards, something that the company started doing when they first included the Rated Rookie subset in 1984. Usually you could tell the team by looking at the player’s uniform, though there are a few cases where that isn’t true over the years. However, that great Pirates logo on the mesh jersey gives it away here, as well as the cap. 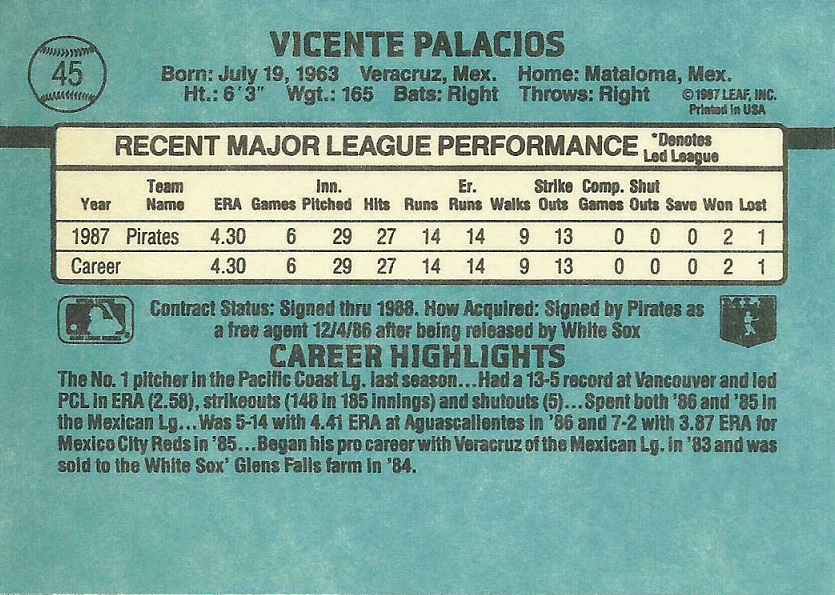 Donruss back designs were all fairly boring and many of them looked the same over the years. They used a solid background color around a black & white section for the stats. In fact, this back looks almost identical to the 1986 Donruss set, with just a few subtle differences between the two years. All of the cards in the set included limited stats, though in this case, all Palacios had was limited stats in the majors. I like the Contract Status section, which has actually helped me a few times when looking up information that I couldn’t find elsewhere. This card actually helped me earlier today because Baseball-Reference didn’t have any 1986 stats for Palacios, plus they are missing the 1985 Mexican League stats, so I was able to add them because of the Career Highlights section at the bottom of this card.

If you’re interested in this card, you can easily find it on Ebay, though having just 29 auctions active right now doesn’t begin to tell you how common this card is still 33 years later. This set was massively overproduced and it’s probably better to buy a full set, rather than any single card. However, I’ll pretend that you want just this card. There are plenty of options for around $2, which includes delivery. There are also a few other choices, including a handful of autographed cards and one seller has an unopened pack with Palacios on top. You can get the autographed cards for under $10 delivered.

One thing I’ll mention with this set is that it’s printed on a light stock of card so they can get damaged easier than your typical card now. So if you get a Palacios card or any card from the set, double check the condition. It should be easy to find them in nice shape, because this is the real start of when many more people began collecting for future value and realizing that condition was important, but that doesn’t mean that every example you find for sale was well taken care of back in the day.