Today’s Card of the Day is the second time that we have featured an E90 card in this series, except this one is a bit different. The first one was a 1909 E90 Dots Miller. This one is a 1910 E90-2 Ham Hyatt, who played first base/outfield for the Pittsburgh Pirates in 1909-10 and then again from 1912 through 1914. The E90 set was first released in 1909 and consists of 120 cards. The E90-2 set was released a year later and it includes just 11 players, all of them Pittsburgh Pirates. The Honus Wagner card from that set is extremely valuable, but today we look at a player who played a bit part on the 1909 World Series champs. 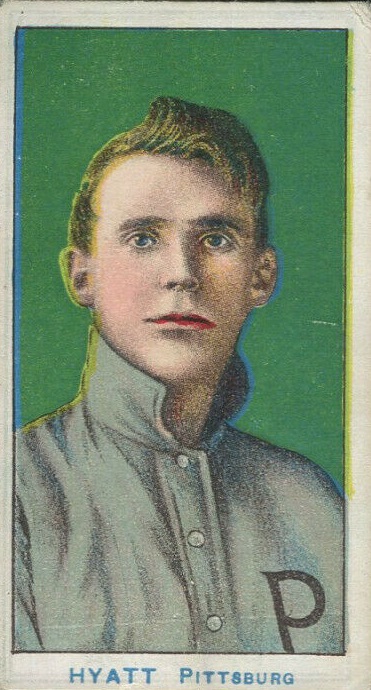 The E90-2 cards have artwork based on actual photos, with a decent quality of work. It’s not the best artwork of the era, but it’s also not the worst. As mentioned above, all of the players in the set are from the Pirates and all 11 cards are portrait style poses. The E90 set has a lot of action photos, including the Dots Miller card linked above and a Honus Wagner batting pose. Another way to tell the two sets apart is the writing at the bottom. The E90 cards have black ink, while the E90-2 set has blue ink for the last name and city, which was still spelled without the “H” at the end at that time.

As a side note, you can see an interesting part of the printing process here. The background isn’t one pass of green ink, but an actual layer of blue and yellow. Because it’s not aligned properly here, you can see the yellow in his collar and the right border, while the blue is visible on the left side of the photo.

Hyatt was a 24-year-old rookie during the 1909 season, who served as a backup outfielder and a backup at first base as well. The Pirates gave him a shot to start a little more often at first base in 1910 after getting rid of 1909 starter Bill Abstein, though the actual fight for a first base job included two newcomers during Spring Training, so Hyatt had to wait until mid-June before getting his turn. 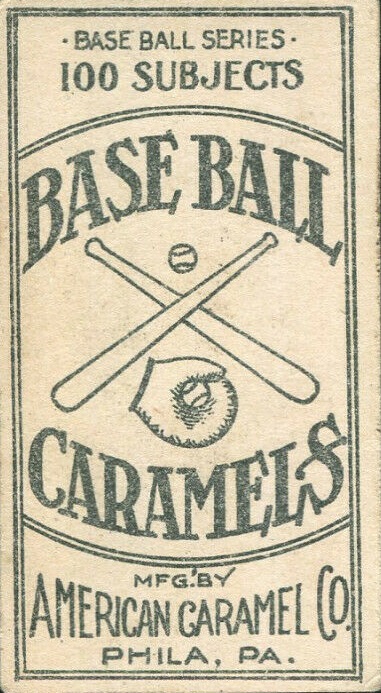 This is basically just an advertisement for the American Caramel Company and their Baseball Caramels. The design is a simple one, but it works. The interesting part here is the “100 subjects”. There are numerous cases throughout baseball card history where they claim a certain number of cards in a set and it’s not the actual number. This here is clearly an example of that, with just 11 cards in the set. I’m not even sure what they were going for here. The other set is 120 cards, and then there’s an E90-3 set of just Chicago players that has 20 cards (they also have slightly different backs), so the “100” doesn’t work no matter how you look at it. The usual thought is that either the company planned a certain amount and just stopped printing them or they intentionally misled people into buying more cards. The other way they did the latter was by not printing certain numbers and everyone would be chasing it. This here probably wasn’t intentional because people would realize fairly quickly after getting the same 11 cards that something was amiss.

This card is rare and there was just one on Ebay currently for sale and one that has sold in the last three months. I don’t know the sold price because they took a best offer, but they were asking $760 for a PSA 4. The active one is listed for just under $800 for an SGC 50 (equivalent to PSA 4). An SGC 40 sold for $216 in an auction two years ago, but prices have jumped a bit recently for old cards. Happy hunting!