I’m a big fan of the 1956 Topps set. I even started collecting it at one time, but put it on hold after getting the Pittsburgh Pirates team set, plus about 20 other cards. One of those cards in the Pirates team set features outfielder Jerry Lynch, who was born on this date in 1930. This is the first time that we have featured Lynch in this series, but he probably should have been here before this point, some 16 months after we started posting Card of the Day articles. He began his big league career with the Pirates, spending the 1954-56 seasons with the team. He then returned to the club in a mid-season trade in 1963, and stayed around through the end of the 1966 season, which was his last year in the majors. I bet if I looked over the list of players with 7+ seasons with the Pirates, there wouldn’t be too many who didn’t have a Card of the Day feature yet, so here’s our look at card #97 from the 1956 Topps set, Jerry Lynch. 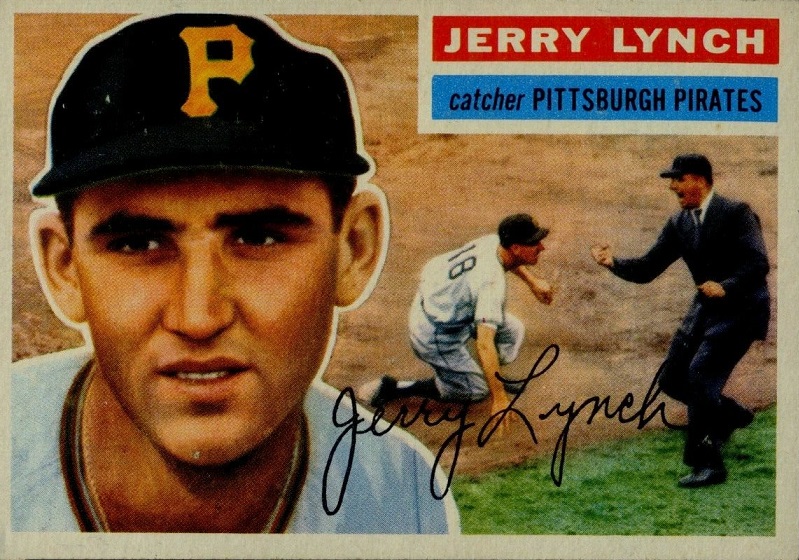 The fronts of 1956 Topps cards are great. The design is rather simple, with a white border around the photo section and then the name/position/team in little strips in the top right corner. That’s a rather basic look, but the photo is what makes these cards. Topps used a portrait of the player in the foreground, along with making the background an entire action scene involving the player. That makes for some outstanding cards in this set. For star players, check out the Roberto Clemente card, or the Mickey Mantle. Both great action shots. The topper here is the addition of a facsimile autograph.

For Lynch in particular, there are two very interesting things on this card. This is his third Topps card and all three used the same photo. The 1954 set began the use of a portrait and an action shot on the same card, which Topps used for three years, then brought back in 1960 for one year. For all three years (1954-56), Topps used the same portrait photo of Lynch, just changing the hat from 1954 to 1955, before leaving it the same in 1956.

The other interesting part here is calling him a catcher, which they also do on the back. He caught a total of 21 innings in his big league career, not all of them before this card came out. That would suggest that he was not a catcher. He was an outfielder, who got used as a catcher a few times in his 13-year big league career. However, there were talks during the winter of 1955-56 of converting him to catcher and the experiment began at the end of the 1955 season. By February of 1956, before Spring Training started, the idea was scrapped and his only catching afterwards was off of the bench for the Cincinnati Reds. 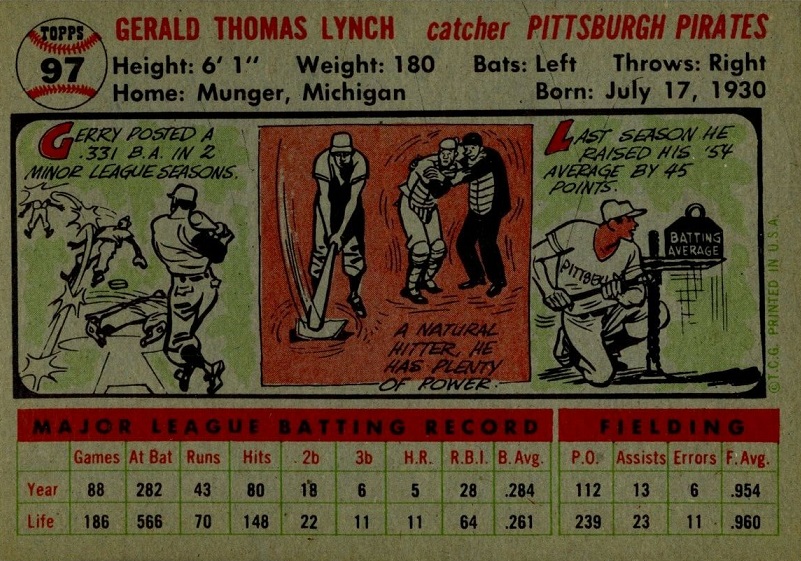 There’s the famous generic gray Topps man in all of his glory, with three different comics this year. However, look at that third one…he turned burnt orange! I have no idea what is going on there, especially since he still has his generic gray arms. Not only does this set have one of the best front designs, but the backs are colorful and the cartoons add some fun facts in a fun way, such as line drives hitting three opposing players and someone being so good that both the catcher and umpire seek solace in each other’s arms. The stats for these cards all showed the 1955 season and career stats. This was also back when fielding stats were regularly included.

This set is extremely popular, which leads to it being easily found on Ebay. For low grade cards, that keeps the prices down. You can get this card for about $4 delivered, though you might want to go a little higher to get one in better shape. There are over 200 active auctions right now for this card and there are 49 sold auctions over the last three months. One interesting auction on the completed side is a PSA 6 for $24 delivered. To me that sounds like a great price for the condition on a card that old.