Today’s Card of the Day features a man who the Pittsburgh Pirates signed on this date in 1969. Kent Tekulve was 22 years old at the time, and he went undrafted out of Marietta College. He went to a tryout at Forbes Field after graduating and was signed on the spot. It would take him five years before he debuted in the majors, and two more years before Topps recognized him with his first baseball card. Since this is the date that he signed with the Pirates, what better card to feature than the one that started it for Topps. So here’s today’s Card of the Day, #112 from the 1976 Topps set, featuring Kent Tekulve on his rookie card. 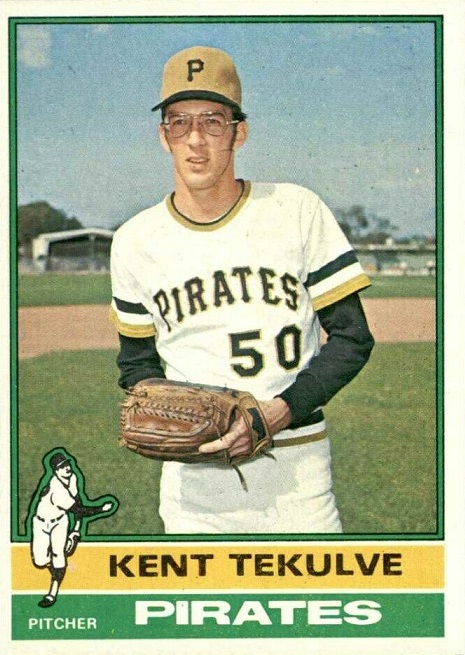 Probably the first thing anyone who remembers Tekulve pitching notices is the uniform number. He was #27 for the Pirates, except during his first trial in 1974. However, even then he wore #32, so the #50 you see here was just a Spring Training number and you can probably tell by the background that this photo was taken down in Florida at Pirate City.

The 1976 set ranks behind the 1970-71 Topps as my favorite sets from the 70’s. If they only knew about the three-year run that followed this set, maybe they would have went in a different direction with their designs. I really like when sets incorporate the team colors in the design. What’s interesting here is that Topps used all different colors for their design this year, but they chose to give all of the Pirates players green and yellow for their colors. That being said, it works. There are some great looking Pirates cards in the set (Al Oliver is a real favorite of mine from 1976). One thing I like from 1976 is that each position, including lefty/righty pitchers, have their own look in the bottom left corner. While the right-handed pitcher is the same for all right-handed pitchers, this follow-through almost looks like it could be a sidearm pitcher. 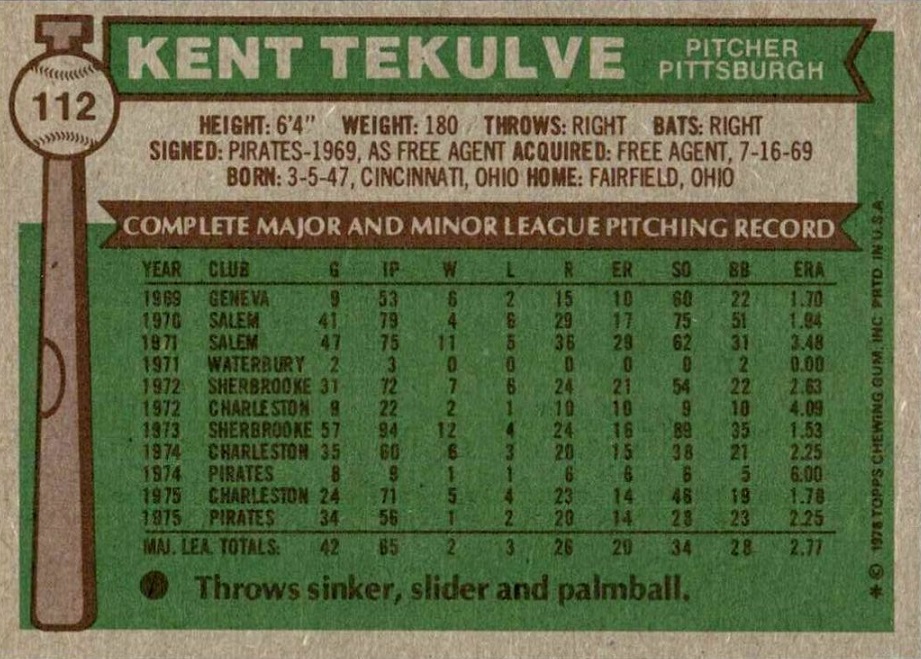 The back here is one of those years where Topps really didn’t think about the people who were potentially reading stats on every card in the set. The scan here is big so it helps you see some detail, but in hand this dark brown writing on a dark green background is no fun to try to read, especially for the players who had a long career at that point. What I like here is that they gave you all of Tekulve’s stats as a pro. You see that he was quite impressive with Charleston in 1974-75, and while he first taste of the majors didn’t go smoothly, that 2.25 ERA in 1975 was a sign of things to come for the great Pirates reliever.

If you’re interested in this card, and who wouldn’t want a rookie of Kent Tekulve, there are plenty of options on Ebay. Probably not as many as you think if you follow these articles closely. There are 38 active auctions for this card (plus three others that include this card in a group). The highest price one is a special auction. Someone has a PSA 10 and they want $200 for it. That’s a straight auction, which won’t be active by the time you read this article unless the relist it. Of the rest, they range in price from $2 to $54, with a large majority of them being under $10. There are 49 completed auctions and the highest price is for a PSA 9 that is also signed, which went for $45. Numerous examples have ended under $3 delivered, so just check the condition closely and you might be able to get one in nice shape for a very low price.