Today’s Card of the Day features two power hitters for the 1960’s Pittsburgh Pirates. First baseman Donn Clendenon hit 106 homers for the 1961-68 Pirates, while Willie Stargell ended up with 475 homers for the Pirates over his 21-year career. Clendenon was born on this date in 1935, so that makes today the perfect day to feature him in our Card of the Day series for the first time. He probably should have been here before, but I’ll try to get him in again before next July 15th. For now, here’s a look at card #99 from the 1966 Topps set, titled Bucs Belters, featuring Hall of Famer Willie Stargell and first baseman Donn Clendenon. 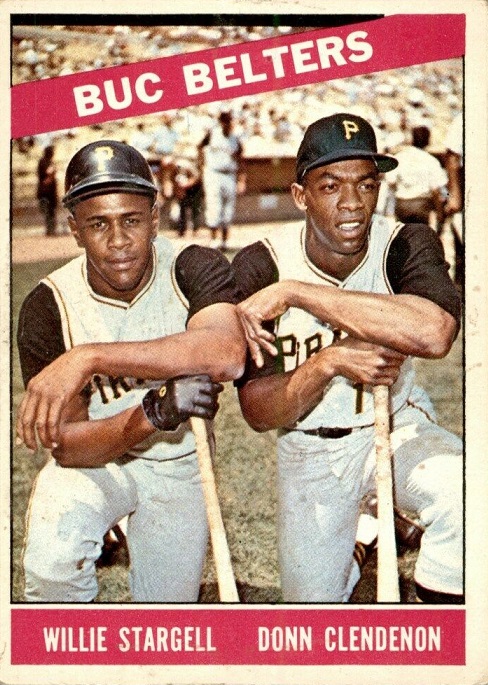 Stargell is still very young in this photo, which was likely taken during the 1965 season. The uniform styles didn’t change between 1962 and 1965 when they both could have been pictured together, but 1965 is the best guess for this photo, since it appears that they had the idea for this card in mind already. Stargell was like 25 years old at this time, while Clendenon was already 30 years old, getting a little bit of a late start in the majors.

I’ll note here what I have mentioned before with this set. I’m not a huge fan of it for Pirates cards because of the pink boxes for the player names and the card name (on regular cards, the top band is the team name). I’m a big fan of when they use team colors on the cards (hence, my love for the 1981 Topps set). I do like the design of the 1966 set, it’s not up there with 1960, 1962 or 1968, but it’s not bad. It’s just the Pirates cards that look bad to me. Other teams have great looking color combos. Check out the Phillies cards, or cards of Mickey Mantle or Willie Mays. Those are some of my personal favorites from the set. That all being said, I really like this card because of the two-player pose for two big names for the Pirates during that time. 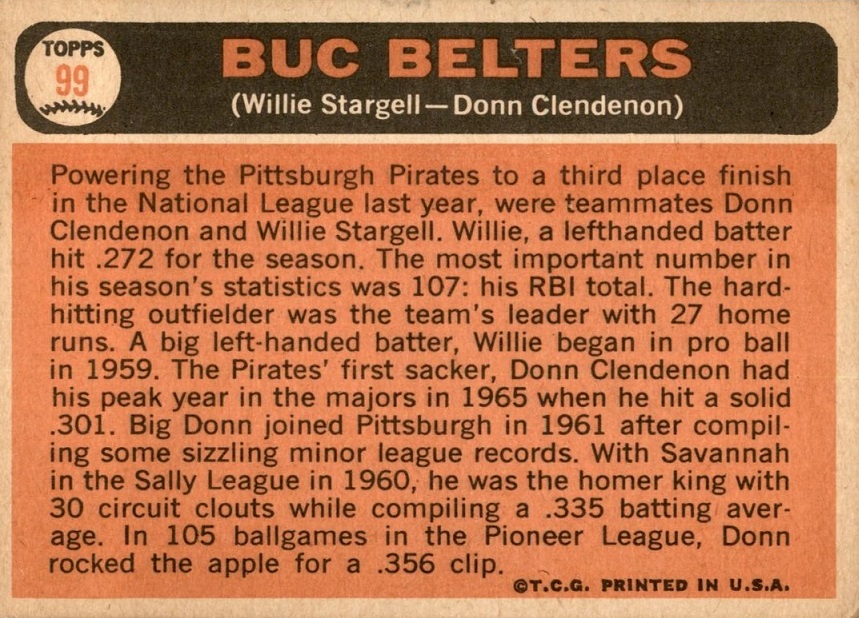 The back here has a nice little bio section, showing why these two were considered to be “Bucs Belters”. Stargell was still very early in his career here. He had 59 career homers at the time of this card being printed. Clendenon started slightly before him in the majors, though he had just 48 career homers through the 1965 season. This card proved to be quite prophetic in a way. Both players set career highs for homers in 1966. Clendenon’s 28 homers stood as his career high throughout his career, while Stargell’s 33 homers ended up representing his first 30+ home run season. You might be surprised to hear that he only topped 33 homers twice in his career, and I say surprised because his 48 homers in 1971 and 44 homers in 1973 are well above that mark. They are also among the best seasons in team history, with the 48 homers only ranking behind two 50+ homer seasons by Ralph Kiner.

This card offers a nice way to get a 55-year-old card of Willie Stargell for a cheap price. Plus you get another Pirates power-hitter thrown in for no extra cost. There are currently 85 of these cards up for sale of the website called Ebay (maybe you’ve heard of it?). Of those 85, a total of 63 cards can be had for less than $10 delivered. Most of those are in the $4-$10 range. There are 27 examples of this card that have sold in the last three months, including some high grade examples. Two PSA 8 versions have sold around $70, while a PSA 8.5 recently went off for $132.50. Happy collecting.