Today’s Card of the Day is just the second one that we have featured from the 1957 Topps set. The first was a pretty good one, the rookie card of some guy named Bill Mazeroski. Today’s featured card is for pitcher Bob Purkey and I picked it just because it’s been almost 14 months since we posted that Mazeroski article. I had four choices for Purkey, a five-time All-Star, who was born on this date in 1929 in Pittsburgh. He spent his first four seasons in the majors with the Pirates and had three Topps cards during that time. He returned to the team in 1966 for his final season in the majors and had another Topps card. I basically just picked the year that was lacking sufficient representation in this series because I actually like the look of two of his other cards more. So here we are, the 1957 Topps Bob Purkey, card #368 in the set. 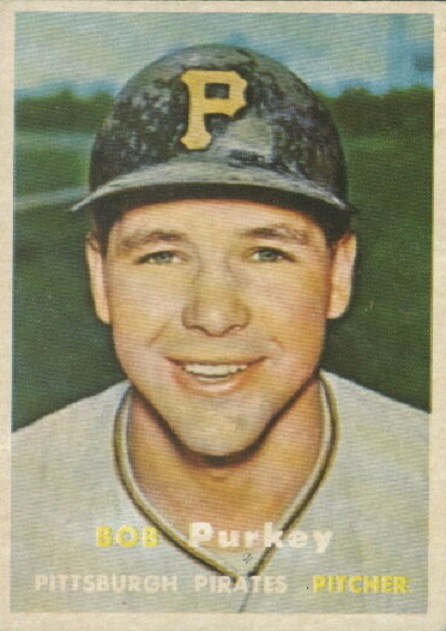 The 1957 Topps set used a rather simple design, but it was such a drastic change from the previous four sets that it worked. The cards had a small white border, using up more space for the photo, then they put the important writing right on the photo. Almost every player had their first and last name in different colors, with the same colors being used for the team name and position. Not all were white and yellow like shown above. Of note, Roberto Clemente had red and blue for his colors. Pirates pitcher Dick Hall had red and white for his colors. Then there’s pitcher Luis Arroyo, who was among the smaller group that didn’t fit that changing color pattern. He was one of a few Pirates who had one color for his full name (red) and a different color for the team name/position (blue). 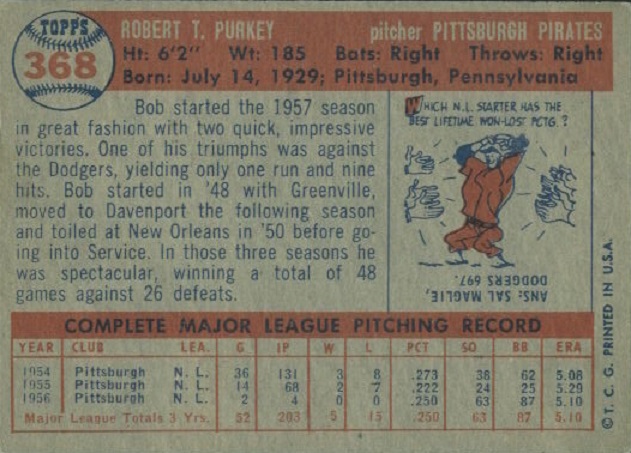 The back of this card has a nice bio section for Purkey, along with the appearance of the infamous generic gray Topps man, who looks like no baseball player ever. The bio section tells you that this card was released after the 1957 season started. As you can see, Purkey had three seasons in already before this card was produced and he saw less playing each year. That’s not surprising with an ERA over 5.00 each of his first two seasons, but hindsight tells us that it was a disappointing trend.

If you looked at the ERA column and saw an ERA over 5.00 for each of his first three seasons, then wondered why I only pointed out the first two, look to the left of his last ERA. Those three columns (PCT/SO/BB) are all incorrect. He did pitch two times for the Pirates in 1956, with four innings and no record. I don’t want to do math at anyone, but you can’t have a 5.10 ERA in four innings pitched unless you allowed a fraction of a run. It would also be pretty tough to compile 63 strikeouts and 87 walks in four innings. Topps actually put him big league totals for the last four stats in place of his 1956 stats. He had one strikeout, no walks and a 2.25 ERA (one run allowed).

As I mentioned above, his lower totals in 1955 and 1956 were a disappointing trend. He did well in 1957, with a 3.86 ERA in 179.1 innings, before being traded to the Cincinnati Reds in a deal that didn’t work out. Purkey went 103-76, 3.49 in 1,588 innings for the Reds, including a 23-win season in 1962. By the time the Pirates got him back, he was 36 years old and coming off of a rough season with the St Louis Cardinals. Purkey pitched just ten games for the Pirates before being released, which ended his big league career. The return in that trade with the Reds was pitcher Don Gross, who did a decent job in 26 relief appearances, but that’s all they got from him.

If you’re interested in this card, you have plenty of options for it on Ebay. There are currently 49 live auctions at the time of this write-up, and they range from $5.50 for the cheapest one, up to $75 for the most expensive. Most of them are priced much closer to the bottom end of that price range. I didn’t do an exact count, but more than half of them can be had for under $10 delivered. As for completed auctions, two PSA 8 cards ended in the $40-$45 range. A PSA 6 ended for $10.50 delivered, which is a steal when you consider grading costs. Happy collecting!