Today’s Card of the Day is from a classic set that hasn’t been featured here yet in this series. In 1911, Mecca Cigarettes released a set of cards with their product that included 100 players. The catch was that they were featured on 50 cards that have since been named the T201 Double Folders set. Each card had two players who were teammates. There was a fold just above the middle of the card. When they weren’t folded, you would get a picture that was 2-1/4″ by 4-11/16″ in size and it showed one player. When you folded the card, you would get a smaller photo of another player. As you will see below, they had a unique way of making that work. There were three different pairs of Pittsburgh Pirates teammates in the set. Eventually we will feature all of them here, but today we start with the one that has third baseman/center fielder Tommy Leach and catcher George Gibson, two key pieces from the 1909 World Series winning season.

Here’s the front showing Tommy Leach by himself:

As you can see, these were colorful cards, with early 20th century artwork that was middle of the road for cards of the era. Some sets had amazing artwork, while others have truly awful drawings. This is definitely the mid-range area, but the selling point here wasn’t supposed to be the artwork. It was the unique design of the set.

Here’s the back of the card in two scans. The first one is how it looks without the fold:

As you can see, there’s a partial picture of George Gibson (don’t flip the screen, I’ll take care of that in a minute). At the bottom they have stats for each player. The “Per Cent” parts are their batting and fielding averages. Fielding stats were shared much more often in the early years of cards. As you can see at the bottom, there’s an ad for Mecca Cigarettes, with their “perfect satisfaction” slogan.

Now here is a better view of just the Gibson part: 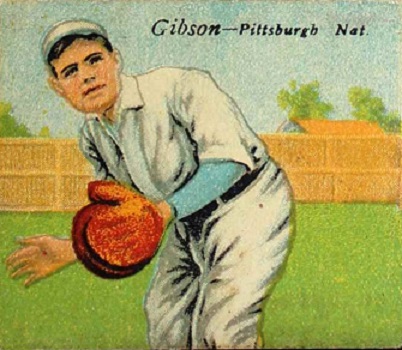 As I said for the front, this set doesn’t have a lot of great artwork. It’s more generic looking in most cases, like one player could pass for 20 other big league players of the time if you squint just right. They didn’t try to hard with Leach there. However, this is a decent attempt for Gibson. Without a name, most people who collect older cards would know it’s him, with an assist given to the catcher’s mitt.

As you can see with the Gibson photo, he is cropped there at the knees. When you flip his upside down photo over, the top part of his legs matches up with the bottom part of Leach, giving you what appears to be a photo of Gibson from head to toe. They gave each player different backgrounds, but those backgrounds are both at the top of the card, so the bottom just needs to match the grass on the field. I would show what Gibson looks like folded over, but I’m sure you can imagine it AND no one is folding these cards anymore. While the folds are fine when valuing the card because they were meant to be folded, doing it too much can take away from the value.

These cards are not common, but you can find them on Ebay. I’d recommend that if you wanted one you didn’t limit your choice to just this card. Assuming though that this article made you want to get one, you have eight choices on Ebay right now. They also made a reprint set years back, and if you’re a budget collector, that would be in your price range. The eight current listings for the real thing range in price from $75 with a best offer option, to $270 for a PSA 5. You might want to wait for an actual auction listing, rather than a buy-it-now. That’s because 11 have sold and they range from $31 for low grade to $291 for an extremely nice example, with most of them selling for less than $75. Happy hunting!