Today’s Card of the Day is a few firsts for this series. I’m fairly certain that we haven’t had any cards from the 2005 Bowman Sterling set yet. This is the first time that Brad Eldred has been featured here as well. The big “first” is the inclusion of a card that has an autograph and game used jersey piece. There was a time when Eldred was tearing up the upper levels of the minor leagues and this card was sought after. Now it’s just a nice collectible piece of the man they called Big Country. Here’s the 2005 Bowman Sterling Brad Eldred jersey/autograph card. 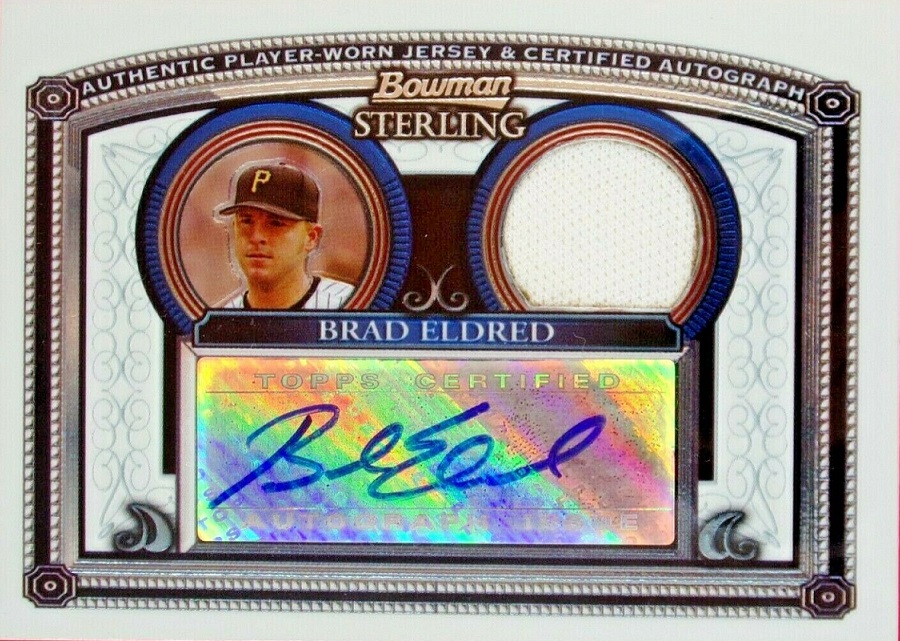 This card has something really interesting on it and I’m not sure everyone knows that they are the same company. If you’ll notice at the top, it says “authentic player-worn jersey & certified autograph”. They double up on the guarantee when you go to the bottom, where Eldred signed the card, but note that this Bowman offering says “Topps certified autograph issue”. Seems a bit odd to me to put two different brand names on the same card front, especially when you can find the Topps name four times on the back in the small print legal mumbo jumbo area and there’s a hologram sticker that has Topps written on it about 50 times (might be an exaggeration). We get it, Bowman is made by Topps.

Bowman/Topps went all out with the design here. That’s a very ornate design around the good stuff in the middle. You have the small photo of Eldred, the swatch of his game-used jersey, and the hologram sticker that is signed by Eldred. There’s a lot going on with the front of this card. It’s a big difference from the back… 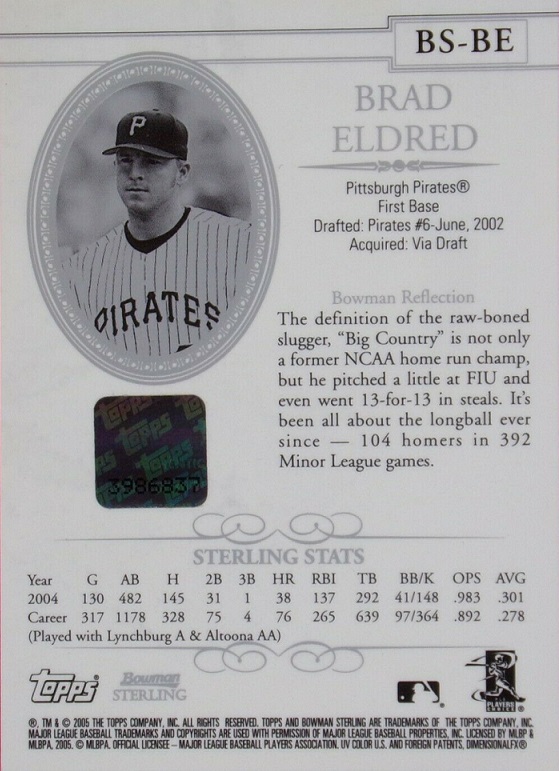 The back starts off with the BS-BE in the top corner, showing that Bowman didn’t really think Eldred was a legit prospect. Actually, the BS just stands for Bowman Sterling. It would have been a nice touch if they used BC instead of BE for Big Country. They mention Eldred’s nickname in the small bio section, along with his early home run feats. In the Sterling stats section, you can see his numbers from the 2014 season, where he blasted 38 homers. He hit even more in 2005, belting 40 homers across three levels, then for good measure, he hit another seven in the Arizona Fall League. Bowman/Topps went with an old school look here, with various shades of gray and black writing. A complete 180 from the color front of the card. The back adds a second photo of Eldred, though it strongly resembles the one on the front and appears to be just a bigger version of that photo with a different crop.

This particular card can be had for under $10 and there are multiple auctions that fit that price quote. There are also some that are listed for more, so don’t jump at the first one you see if you’re interested in this card. I’ll note that there are some variations on this card. The regular version shown above was limited to 199 copies. There’s a black refractor version that was limited to 25 cards and then a one-of-one red refractor. There’s a copy of the black card on Ebay right now for $17 delivered and there’s also a second one that is graded by Beckett as a 9.5 (basically a perfect card) and they want $158 for that card. That’s a huge price for a player who ended up with a nondescript big league career, but it’s there if you like the high grade cards.