Today’s Card of the Day comes from one of my favorite sets. The 1981 Topps set has one of the best gems for any card set hidden in plain sight. Topps included the team names in baseball hats in the bottom corner and 25 of the teams have a regular baseball cap. However, the Pittsburgh Pirates cards all have the team name in the ever popular pillbox caps. I like the Pirates team set  in particular because of the players, with most of them being key parts of the 1979 World Series champs. I also appreciate when Topps uses team colors on the card, plus the uniforms from that era just have that great look. It’s not just the Pirates cards though, the entire set has a lot of interest for me, but today we are looking at just one card. Ed Ott played for the 1974-80 Pirates and he’s celebrating his 70th birthday today, so his 1981 Topps card gets the featured spot. 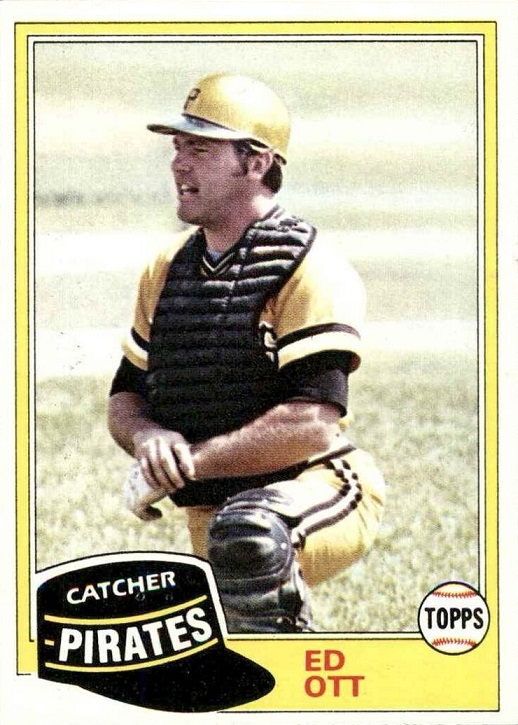 I’ve always been a big fan of the catching poses and I think it’s just because they are different from every other position. Regardless of the pose, you always know when you’re looking at a catcher. As you can see here, the yellow border goes great with the Pittsburgh colors, and then you see the pillbox cap in the bottom left, with his position and the word Pirates. 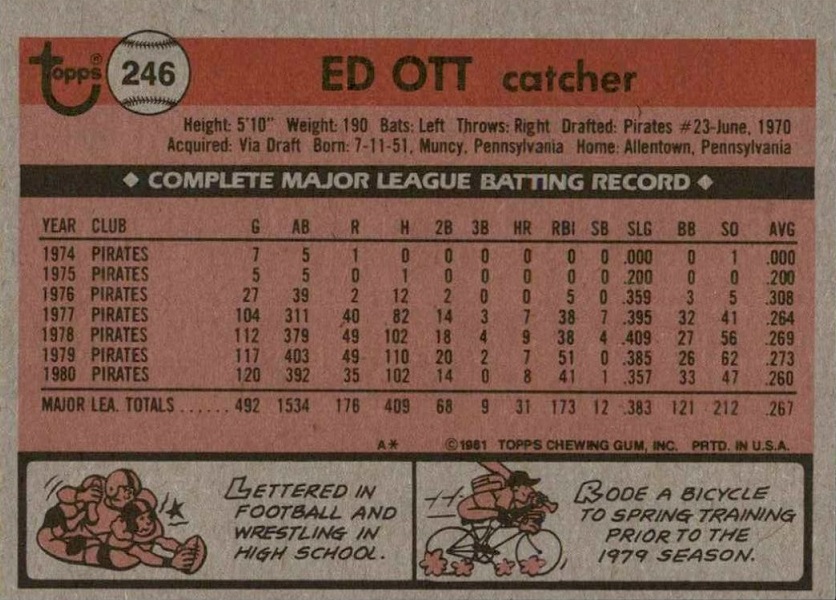 With those stats listed, you’re looking at his entire time with the Pirates. Ott was traded to the California Angels before the start of the 1981 season. In fact, he got an updated card showing him on the Angels when Topps released their 1981 Topps Traded set later in the year. I like the fun facts here at the bottom using the generic Topps man, who is usually gray on most backs, but here he is  an off-red/sort of pinkish color, not exactly sure what you would call it. Ott was quite an athlete in high school, and between wrestling and playing football, it’s not surprising that he ended up behind the plate so he could take more punishment. He also rode his bike to Spring Training, so that’s fun.

When I was a kid, I heard the trivia question/answer about Ott having the shortest name in baseball history. Just look on this card and there it is, five letters. Years later I learned that his name is Nathan Edward Ott. He doesn’t have the shortest name in baseball history, it’s not even close. My full name has ten letters, what you see is what you get. His name is 50% longer than my name.  Ken Griffey Jr could claim that he has the shortest baseball name because people called him Jr. No different than Ott in that sense, just using a partial name.

This card is obviously a common card, one where you can probably get it for $2 delivered and end up paying more for the delivery than the card itself. I’ll note that this is a very popular card to get signed apparently. I counted 16 active auctions, most of them under $10 delivered. Another four signed examples have sold in the last three months. There’s also one really cool auction up right now. A PSA 10 of this card can be had for $36. You’re not going to find a lot of those, mostly because if the card got a PSA 9 grade, you’re paying more for the grade than what the card is worth in that grade, so you don’t see someone take chances with such a small payoff if they’re correct about it being a perfect ten.