On the day before the 1951 All-Star game, the Pittsburgh Pirates took on a team of ex-Pittsburgh Pirates who were still active players. The game was an exhibition benefit game for former MLB player Moose Solters, who had lost his vision years earlier after being hit by a ball. The opposing team included 15 players, and 14 were once members of the Pirates. The other one was Hall of Fame pitcher Bob Feller. He was a teammate of Solters at one time and asked to play in the game, which ended up raising $15,000 for the former player. Solters was a Pittsburgh native, which is why the game was played at Forbes Field. Back at his peak in 1935-37 when he had three straight 100+ RBI seasons, the local press offered constant reminders that the Pirates lost out on a local kid, who they should have signed.

There’s no play-by-play of the game, so this will be a bit brief compared to most of these Game Rewind features. However, it’s amazing to see the talent and players who showed up for an exhibition game with their team’s permission so they could play a benefit game for a former player during their All-Star break. Here’s the boxscore, which will tell most of the story of the game, while I’ll fill in the rest from various sources that actually went into a little detail about the contest. 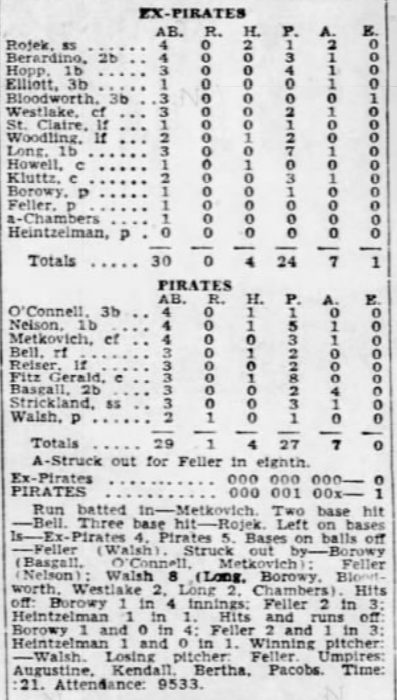 I’ll start out by saying that the game went longer than 21 minutes (see “Time” at the bottom), but you’d probably be surprised to hear that it took just one hour and 21 minutes to complete according to a different source. It wasn’t rare for older games to end in about 90 minutes, but games in 1951 usually ran at least two hours. Only one walk, eight hits and one error in this contest, so I’m guessing that guys went up there swinging with the intention of keeping the game moving quickly.

Even if you’re a diehard Pirates history fan, one of those names for the ex-Pirates (besides Feller obviously), probably stands out. The St Claire there is a catcher for the Boston Braves named Ebba St Claire. Back in 1946, he was competing for a job with the Pirates during Spring Training, known then by his actual name, Edward St Claire. He was sent to the minors in early April after failing to make the club and then didn’t debut in the majors until five years later, which was not even three full months before this benefit game took place.

One other impressive name here is the lead-off hitter for the Pirates. That’s Danny O’Connell, who was in the military at the time. He came to the game on a three-day leave and was allowed to play. You don’t often see an active military member bat lead-off for the Pirates, but here’s proof that it happened one July night at Forbes Field in front of 9,533 fans.

The Pittsburgh Pirates were bad at this time in their history. The 1950 club went 57-96, and the 1951 club was 31-45 at the time of this game. I mentioned the impressive names in each lineup, but you might notice a name missing from that Pirates lineup. Ralph Kiner wasn’t available for the Pirates because he was their lone representative in the actual All-Star game, which was being played at Briggs Stadium, home of the Detroit Tigers. However, the Elliott at third base to start this game was Bob Elliott, and he played in the All-Star game the next day, his seventh All-Star appearance of his under-appreciated big league career.

Here’s a really interesting fact about this contest with the club having just three days off for their All-Star break. They played a doubleheader the previous day with the St Louis Cardinals, so a break would have been nice. I’m obviously not knocking them for playing because it was a great cause, just pointing out the dedication to actually go through with the game.

Three of those players in the boxscore were with the Cardinals, so they just stayed in town for the game. Stan Rojek, Wally Westlake and Cliff Chambers all played the day before, likely the reason that Chambers pinch-hit and didn’t pitch. He was just two months removed from throwing the Pirates first no-hitter since 1907, and he wasn’t even a full month removed from being trade to the Cardinals, along with Westlake. Rojek was also with the Pirates to start the 1951 season, before being traded over in mid-May in a deal that brought back Rocky Nelson. Dale Long played first base here. He was not only a former Pirates player, he was also a future one at this time. He debuted with the 1951 Pirates, then was lost on waivers to the St Louis Browns on June 1st. He rejoined the Pirates in December, but didn’t play in the majors again until 1955.

As you can see by the score, it was a 1-0 contest and pitcher Jim “Junior” Walsh pitched a complete game shutout. Could you imagine a guy throwing a complete game during an in-season exhibition game now? I’ll take things we will never see in baseball again for $400, Alex. After that impressive showing, you would think Walsh had an interesting career left in the majors. He actually made one more big league start and won one more big league game, throwing a total of 30.1 innings after this contest. He was 32 years old at the time and he spent the 1952-56 seasons in the minors to finish out his pro career.

Walsh scored the only run in his impressive victory, and the losing pitcher should be the last person you expect to lose this game. Bob Feller walked Walsh to start the sixth inning, proving that even one of the greatest pitchers in baseball history could also commit the ultimate sin for pitchers. Walsh moved to third base on a single by O’Connell. Rocky Nelson struck out, then George Metkovich hit a bloop to right-center that Wally Westlake had bounce off of his glove after a long run. The ball went right to infielder Johnny Hopp, who threw to second base for the force of O’Connell, who had to wait to see if the ball would be caught. That single-turned-force out scored Walsh with the lone run.

There were other good chances to score in this game. Rojek hit a triple, while Gus Bell and Ed Fitz Gerald hit doubles for the Pirates, but all of those runners were stranded in scoring position.

As a final note on this day, one paper mentioned something that had to be a great experience for all involved. Local little league players got to play three innings before the exhibition contest. If you’re interested, the Greenfield Cubs won 2-1 over the Highland Community Little Leaguers. No boxscore, but the Cubs pitcher had the last name Hammer, so that’s fun.