Today’s Card of the Day is an anniversary throwback from Topps, featuring Josh Harrison, infielder for the 2011-18 Pittsburgh Pirates. This 2018 set paid tribute to the 1983 Topps set, and this specific card featured the same look as the All-Star cards from the original set. Harrison, who turns 34 years old today, was an All-Star for the second time in his career during the 2017 season. So when Topps came out with this tribute set, he received a special card in addition to the regular base card in the set. 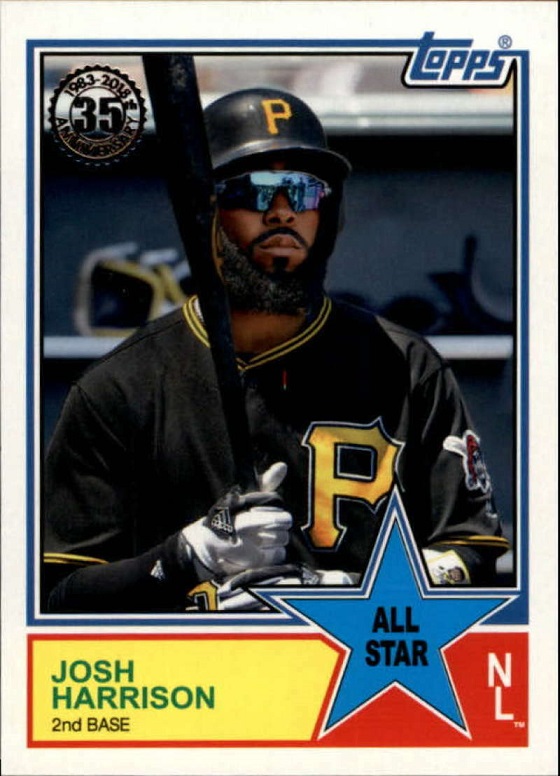 This is the exact look of the 1983 Topps set, with one obvious difference, besides the fact that it pictures a player who was -4 years old at the time of the original set. That 35th anniversary logo in the top left-hand corner lets you know that this is an anniversary tribute card for an earlier set. You can find that similar logo on many other recent sets as Topps came up with the genius (sounds sarcastic, but it’s not) idea of bringing back old designs. I’ve mentioned that I’m not a fan of the 1977 Topps set design, but I have liked some of their throwback/tribute offerings featuring that same design.

Part of the dislike associated with the 1977 set is weak picture quality, so a glossy card front with better quality photos just hits different. The same could be said for this particular set, though two small asterisks should apply. The 1983 Topps set had a nice design, middle of the pack as far as what they produced during the 80s, and the picture quality was much better than six years earlier. So I’m going to like a throwback to that set for sure. 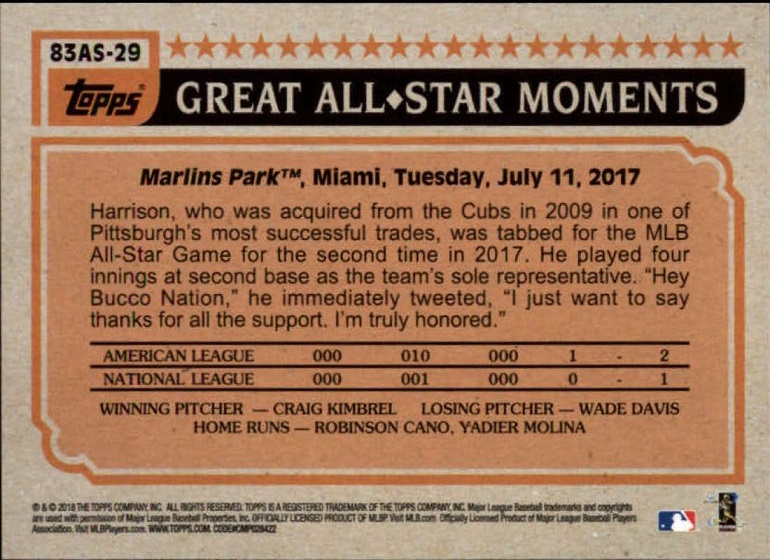 The back has the same setup/colors/design as the 1983 Topps set as well. There’s one big difference with how Topps handled the All-Star cards between the 1983 and 2018 sets. This one says “Great All-Star Moments”, while the 1983 set said “Great All-Star Games”. As you see here, Harrison’s card shows the 2017 game boxscore and a quote from Harrison about the game, thanking the Pittsburgh fans for their support. If you look at the Carlton Fisk 1983 Topps All-Star card, the back talks about the 1940 All-Star game. Fisk was around for a long time, but his big league career started in 1969, so he wasn’t around (or even on Earth) for that 1940 game.

This card sells for about $2 delivered for the regular base version of the card. There are also gold versions, blue versions and jumbo versions (5×7) that were all printed in limited numbers and they’re available on Ebay right now (one of each). Those range from $6-$10, though all three have best offer options, so you can lower that price range a little. I’ve seen red and black versions (called parallel cards) of these All-Star cards on Ebay, but none of those are available for Harrison. The red is much more difficult to find than the black. Each card also had a platinum version, but good luck finding one of those, they made one for each card. While there aren’t a lot of these on Ebay right now (23 total including the variations), there haven’t been any that have sold in the last three months either. It’s a nice looking card, but it’s obviously not highly sought after.