We have already covered a 1976 Topps Rookie Infielders card here, but this is not a repeat article. This particular article is for the four-player card featuring Willie Randolph. The previous one had Craig Reynolds on it. That’s right, the Pittsburgh Pirates had two future All-Stars in their infield and neither one of them made any significant mark with the team. At least Reynolds brought back Grant Jackson in a trade.

You sometimes hear delusional people thinking that the Chris Archer trade is already the worst in Pirates history, but it’s not even close to the worst and it pales in comparison to what the Pirates gave up for Doc Medich prior to the 1976 season. We already know how that one turned out and I can tell you without checking Baseball-Reference that the combo of Tyler Glasnow and Austin Meadows combined aren’t anywhere near approaching the career value that Willie Randolph put up, nor will they be anywhere near him before they reach free agency, not with the way Meadows plays defense or the injury-prone Glasnow. That’s without mentioning that Medich was just the third best pitcher in the trade that season, as both Ken Brett and Dock Ellis outperformed him. To make matters worse, Medich was then part of a second bad trade in value after one year. At least the Pirates dumped Archer this year, allowing the Rays to pay him $6.5 M to be injured. Learn your history, people.

Today we celebrate Willie Randolph during his Pittsburgh Pirates days, before he put up 66.2 WAR over 17 seasons outside of Pittsburgh, which should have got him some Hall of Fame attention. I mean the guy is tied with Duke Snider and Ed Walsh for career WAR, two players who not a soul would argue that they don’t deserve to be in Cooperstown (If you do, you probably think the Chris Archer trade is the worst in Pirates history still right now). Randolph had just turned 21 years old when he debuted with the Pirates in 1975. He came up in July, but he played just 30 games, so he was still considered to be a rookie, making him eligible for this card. Today we will take a quick look at all four players featured on card #592 in the 1976 Topps set to see how they did with their choices. 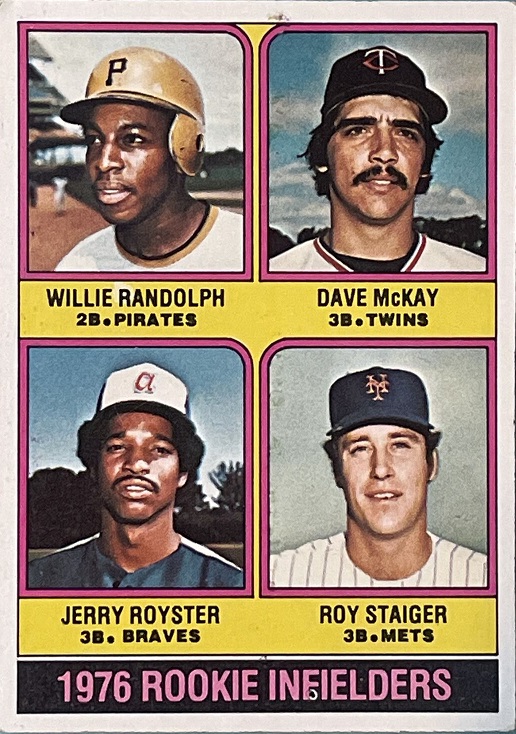 I’m a big fan of these cards, even if I’m not a big fan of the color combo here. Basically it’s the Mother’s Day version of a Pittsburgh Pirates jersey, without the whole Mother’s Day connection. That being said, the four-player rookie cards are always fun to look at, especially years later after their careers played out. Due to my age, I have no idea how exciting it was to have four chances of hitting on a star player on these rookie cards, which Topps brought back during the 1974-78 time period (They had three players in 1973 and went with team rookie cards in 1979). We can imagine though by looking at these cards from a 1976 perspective. First the back, which will help with that process. 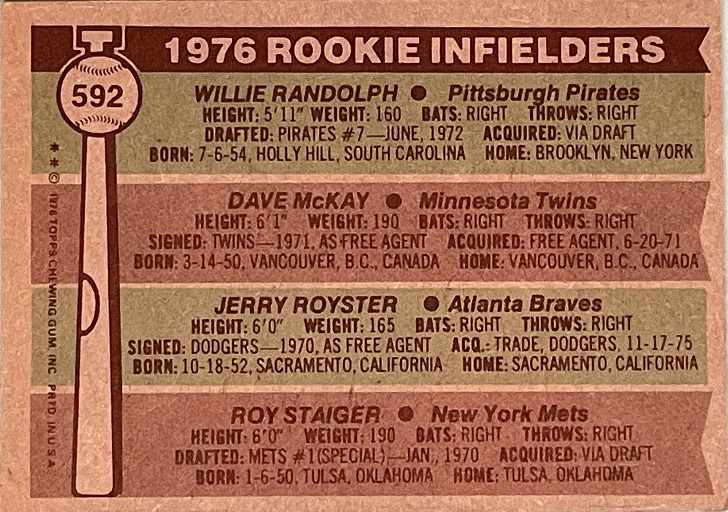 We will start with Randolph, since we basically covered him already. He’s two years younger than everyone else here, so that’s a good sign. Seventh round pick out of high school means that he was very good at a young age. You don’t need to know much about baseball to know that he turned out to be the best here. He was a six-time All-Star, who excelled on defense and at getting on base, while using his above average speed to his advantage. There aren’t many better players on these rookie cards, so without any other help, this card is a big win for Topps…but we still have three others.

If you look at these other players, probably the most well-known is Jerry Royster, at least as a player. Dave McKay is probably better known now because of his long coaching career, but unless you’re a Hall of Fame manager, that’s not going to help a card value, so we will stick with Royster here. He played 16 seasons in the majors, including three partial seasons with the Los Angeles Dodgers before this card came out. He was traded to the Atlanta Braves in November of 1975, which tells you a bit about the production of these cards. Royster is on the Braves after a November 17th trade. Randolph was traded on December 11th, but he’s still on the Pirates. That’s a 24-day gap for when they had the deadline for any printing changes. Anyway, Royster was slightly better than a replacement level player for 1,428 games, which won’t help this card’s value, but it’s extremely impressive considering just how many humans have played more than 1,428 big league games.

On to McKay, who went undrafted and he was 26 years old when the 1976 season started. He was a .229 hitter over 645 games and eight seasons in the majors. That’s around the minimum you should hope for from one of these selections, unless injuries are involved of course. Not a hit by Topps here, but they didn’t miss either.

Roy Staiger is the final player here and I knew two things about him before this article. He was a first round pick and he was on this rookie card. I probably looked him up in the past, but the information escaped me. He played 152 big league games over four season, hitting .228 with four homers. He had a nice season in Triple-A in 1975 and debuted in the majors that year, so you can see why he got on this card. He had a decent minor league career, so it looks like he just struggled with the jump to the majors.

That gives Topps one major hit, one decent hit, one average result and one miss, though it’s hard to blame them for including Staiger with his resume.

This card is both popular and plentiful, but the supply outweighs the demand, keeping the prices down. If Randolph ever gets Hall of Fame recognition, then that will change, but he’s not the most noteworthy player already off of the ballot who isn’t in yet, so it could take some time. Check actual auctions on Ebay as opposed to Buy it Now options. Plenty of auctions have ended for around $2 delivered. This card will get pricey in high grade though. Three PSA 9’s have ended over $150 each in the last three months, though others have ended for under $100 in the same grade. If you want a nice mid-grade example, you’ll pay around $10 ungraded.