Today’s the birthday of Hall of Fame pitcher Goose Gossage, who lasted one impressive season with the Pittsburgh Pirates. He came over in a four-player trade with the Chicago White Sox in December of 1976, with Richie Zisk going the other way. After the 1977 season, Gossage left to sign with the New York Yankees. The timing of the trade and his free agent signing led to him not being pictured with the Pirates on any Topps cards, which was the only big card producing company at the time. However, he ended up with the Pirates on two other sets produced during that time, both food products. I could have picked his Hostess card for this article, but I went with the Kellogg’s card instead because it’s a bit more interesting, especially once you see the back. 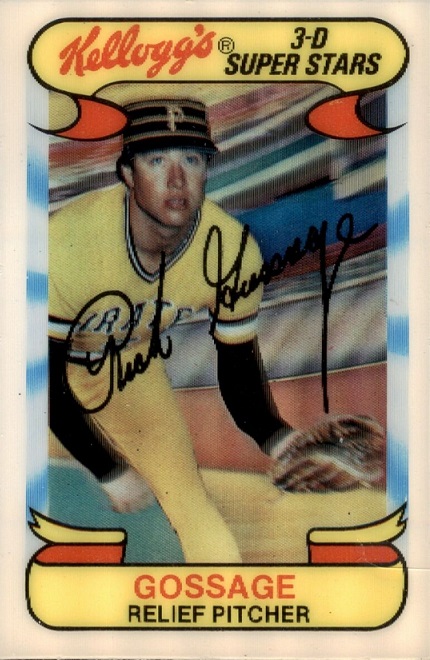 I really like this set because it’s something different from the era. There are other sets like this in the 1980’s, most notably the Sportsflics sets from the mid-to-late 80s. This card has a rare photo of Gossage with the Pirates. His Hostess card that I mentioned above is actually airbrushed, but this is the real thing, even if it’s in 3-D. The 1978 Topps card of Gossage really went out of their way to put him on the Yankees, airbrushing an entire full body action photo of him instead of using the old standby of taking a photo with no hat on, so you could just crop the head close and save yourself a lot of work.

These cards have facsimile autographs on front. They don’t have the player’s first name or his team name (more on that below). It also differentiates between a starting pitcher and a relief pitcher, which was not common practice. 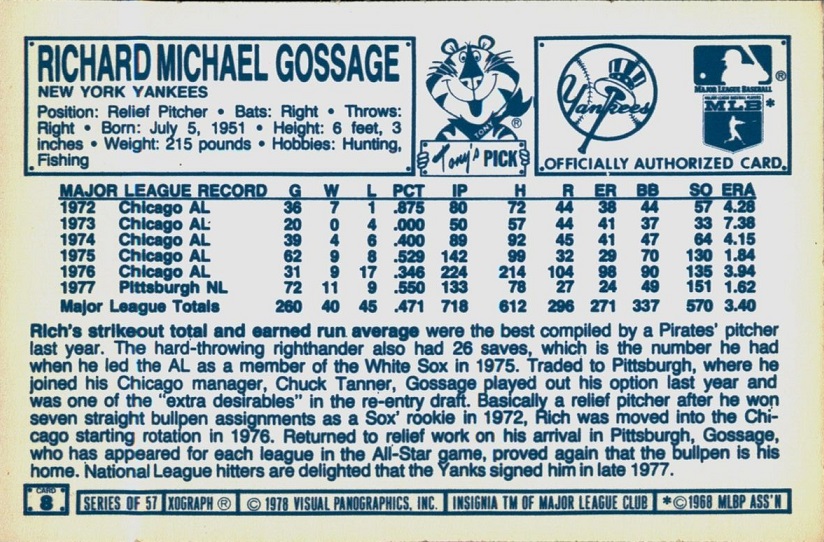 Here is where this card gets very interesting and it brings up a question that has been asked many times among card collectors. You obviously saw the front first and he’s clearly pictured on the Pirates. However, this card lists his team (under his name) as being the New York Yankees and we were cheated out of seeing the great Pirates logo from this era, which was replaced by the Yankees logo. The question is, does this card count as a Pittsburgh Pirates card or a New York Yankees card? I honestly don’t think that there is a right answer, just a side of the fence to choose. If I was collecting all of the Pirates cards from this Kellogg’s set, I’d want to have this particular card. I don’t think I could say the same if I was collecting all of the Yankees cards just because the front of the card holds so much more of the visual appeal here. If it said Yankees on the front, then I’d probably feel different.

One thing to notice here. You don’t see the famous “Goose” nickname anywhere. Here’s two interesting things about that, both of which I just learned on Newspaper.com. Despite his 1972 debut, the nickname came along in print in 1975 for the first time and it was used quite often that year. He wasn’t the first Goose Gossage. If you do a chronological check for the name “Goose Gossage” in quotes, you’ll find some articles from the late 1950’s and early 60’s about an accomplished fisherman named Goose Gossage.

If you’re interested in this card, then you can probably get one off of the Ebays for under $10. The card in the scans here is for sale for $7.49 and a recent sale went for just over $8 delivered. I’ll note something interesting here. Not everyone refers to him as Goose Gossage. I learned that the hard way (it wasn’t that difficult actually, just took longer). I searched for Goose Gossage (along with 1978 Pirates) and this particular card didn’t show up for sale. I only saw it in the completed auctions. Then I searched for just “Gossage” and this one showed up, along with eight completed auctions. Basically, it’s a rare card for the era and it sells, so don’t wait on it if you see one and want it.