Today’s Card of the Day features long-time manager of the Pittsburgh Pirates, Chuck Tanner. It’s from a set that we have featured here just once before, almost three months ago when Lee Lacy was our Card of the Day subject. Tanner has been our topic once before, when we took a look at his 1978 Topps card back on November 5, 2020, which was the anniversary of his trade to the Pirates. He’s here again today because he was born on this date in 1928 in New Castle, PA. 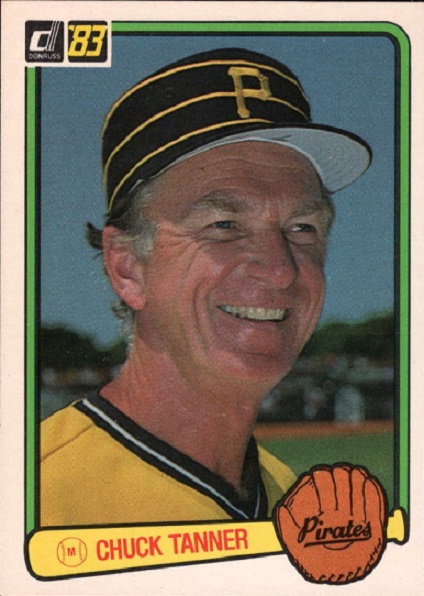 I probably mentioned this in the Lee Lacy article, but the 1983 Donruss set was one of the most unoriginal designs I’ve ever seen. I’m not saying that I don’t like it, I’m just saying that it’s almost exactly the same as the 1982 Donruss set front and back, almost like it’s part two of the 1982 set. The team name in the baseball glove is a nice little feature, and the baseball bat for the name is also nice. The 1982 set also used a baseball bat for the design, but they went wacky that year and put the team name in a baseball instead of a glove (crazy!). See that Donruss symbol up top along with “83”? The 1982 set was completely different, with a Donruss symbol and “82”. That green border around the photo and the white border outside was a blue border in 1982 around the photo and white borders around the outside. I think someone said something in 1984 because they changed things up a lot for that year.

One odd little note here and that’s the abbreviation for “manager”. They used the letter M. I’ve always seen it as “MGR”. It was probably used in some other set over the years, although in the early days of baseball, M was used for the center fielder…trivia time: Why M for the center fielder? 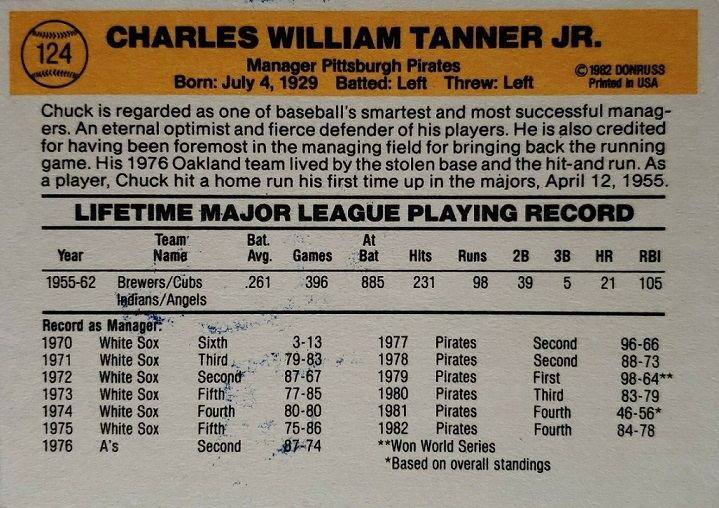 The back has a gold strip up top for the name/number/birth date, etc. It was blue in 1982, otherwise you’re basically looking at the 1982 back design. Two interesting things here besides the bio stuff for Tanner, like for instance, how many people knew he homered in his first MLB at-bat? You may have learned something there. It’s also a nice touch that they have his year-by-year M records. However, the two things of note here are both minor in detail. Donruss cards always had the year they were printed instead of the year for the set, so 1983 cards say 1982 on the back (far right of gold bar), I assume done just to try to confuse people. The other note is his birth date being wrong. As mentioned up top, Tanner was born a year earlier than it says on this card. That’s not a Donruss error though, his birth year was actually believed to be 1929 throughout his baseball career.

This card is a common and it will run you about $2 delivered, with numerous options around that price. I’d suggest going for the team set if you’re interested in the Tanner. You can usually get those for around $6 delivered and you get some great names from the past, including Willie Stargell. One other note here and it’s autographed versions of this card. They are out there, but they are a bit more than the regular card because Tanner passed away ten years ago now. There are two options available right now on Ebay for around $20, one signed in pen, one in marker. I like the marker autographs better for cards, pens work better for baseballs. Just my opinion, but I’d prefer the marker card.