I went into today’s Card of the Day article knowing exactly which card I wanted to use. I looked over the players involved in this morning’s This Date in Pittsburgh Pirates History article and decided to focus in on Moises Alou for today’s featured player. I just needed to find a good scan of his 1990 Fleer card, which is a two-player rookie card. As I scrolled through Ebay, I noticed a shiny newer card showing Alou with the Pirates. It was a card that I’ve never seen before, and you might be about to see it for the first time as well, because today’s Card of the Day is a 2015 Bowman Chrome Moises Alou. 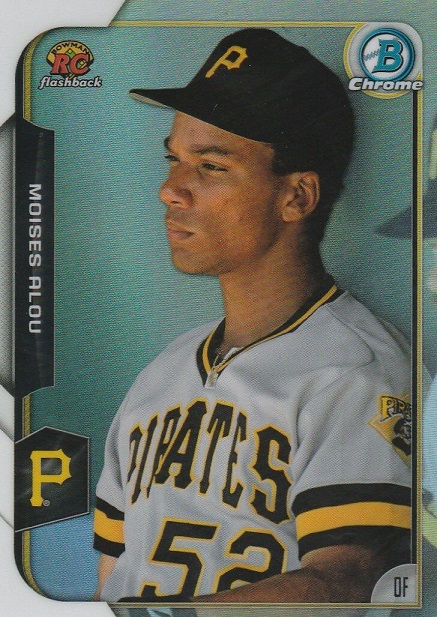 Alou was a first round pick of the Pirates, selected second overall in 1986 back when the amateur draft used to have a January phase. He more than lived up to the hype of a second overall pick, it just didn’t happen with the Pirates. He was with the team for two games in July of 1990 before being traded to the Montreal Expos for pitcher Zane Smith. This deal is how prospect-for-veteran trades are supposed to work out. The veteran helps the team to the playoffs and the prospect helps the other team years later. Alou became a solid regular in 1992 and had two big seasons in his career, 1994 and 1998. He had a solid 39.9 WAR during his 17-year career, with much better numbers on offense than on defense. That -9.6 dWAR really dragged his career WAR down and probably kept him from getting any serious Hall of Fame consideration. He received just 1.1% of the votes during his only year on the ballot. If he was an average big league defender (or better), then he’s probably still on the ballot, getting about 15-20% of the votes each year.

I’m sure no one really thinks of Alou as a Pirates player, even though he spent five seasons in the organization and he debuted with them in the majors. This card made 25 years after his debut highlights that brief big league time, and gives you a photo of the 24-year-old (he may have been 23 still in the photo if it was taken in Spring Training). You get the 1990 uniform in the photo and the current Pirates logo on the front, so the card looks both old and new at the same time. 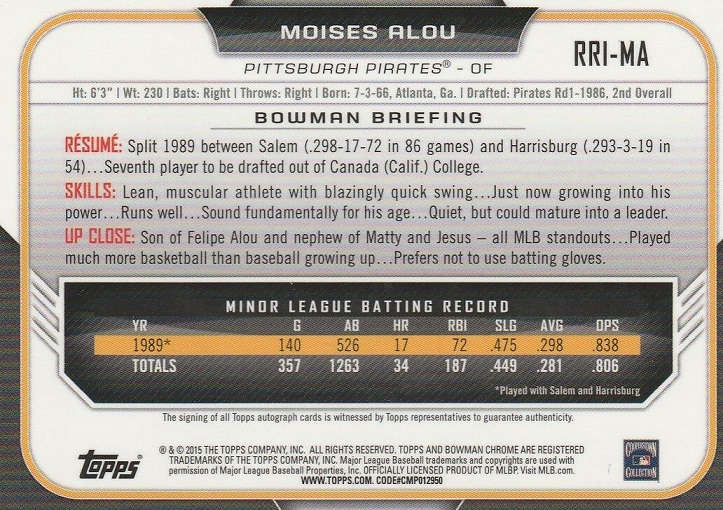 I love that the back of this card acts like his career never happened. The stats on the back are his minor league stats through the 1989 season, when he split the year between High-A and Double-A. There’s a scouting report that notes his quick swing, potential for power and his running ability. Bowman really hit on all aspects with this one, good job of doing that seven years after he retired.

If you’re interested in this card, there are currently 34 auctions for the card up on Ebay right now, including some of them that are factory signed and limited number variations. Just the basic card will cost you about $2 delivered, with a handful of options in that price range. The price on the autographed versions goes all the way up to $125 (has a make offer option) for the red refractor version, which was limited to five examples.