A quick back story here for our Card of the Day selection. When I first got a job and could afford older cards, I started buying Old Judge cards. I wanted to get cards of all of the 1887 Pittsburgh Alleghenys. That’s the first year that you could collect for the franchise and the N172 Old Judge set included 15 of the 16 players from the team that season. That’s right, they used 16 players during an entire season. The only player missing from the Old Judge set was Ed Beecher, and that’s because he wasn’t with the team in early May when they took the team photos. The only option for Beecher was the N284 Buchner Gold Coin set, which was released later in the year. So my 1887 team set includes 15 players from the Old Judge set and outfielder Ed Beecher from the Buchner set. The two card sets are completely different, with Old Judge cards using real photos of players and the Buchner set used artistic depictions of players. We have featured the Old Judge set here numerous times, but this is our first run at the N284 set. 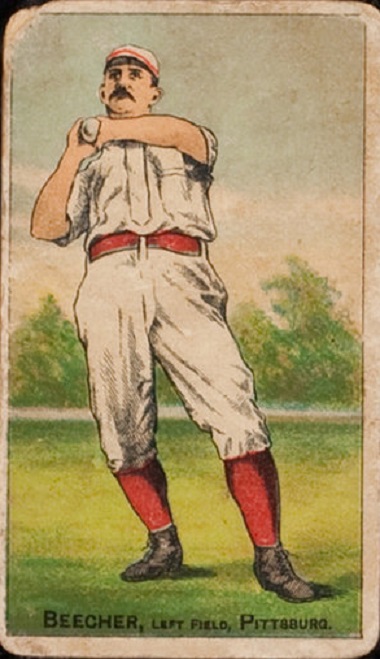 Notice the Pittsburgh spelling, which was not correct for the time, but would be correct during the 1890-1911 time period. These cards are partially generic. The poses are used over and over in the set and they would just change to match the player/position, but it wasn’t a detailed drawing and a lot of players have mustaches back then, Beecher being one of them. The artists used this particular pose for the left fielders in the set, then changed the team colors to fit each player, though there are cards of Emmett Seery on Indianapolis and Joe Hornung on Boston that look almost exactly like this Beecher card. 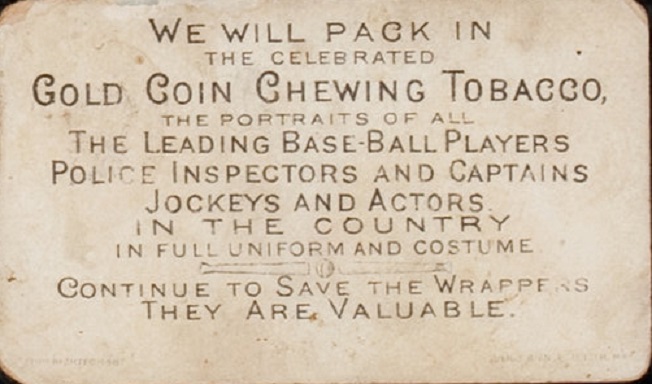 As you can see by the back, these cards weren’t just limited to baseball players, or “base-ball” players as they put it. Baseball was often written as two words back in the early days of the sport, but not always hyphenated. The “N284” designation wasn’t an original name for the set. It came along many years later when Jefferson Burdick took on the task of cataloging all of the baseball cards out there at the time, giving them designations based on the type of set. The “N” here stands for 19th century, while the 284 was just a random number he assigned.

These particular cards are both popular and not as popular as they could be due to the generic drawings. Some collectors ignore the set completely (I only have Beecher), but there are enough who don’t, along with a limited supply, that the prices stay high on these cards. If you’re just looking to add Beecher, you’re probably going to have trouble finding him for sale individually. Only three of his cards have been graded by PSA and six by SGC, though that doesn’t necessarily mean that nine have been graded, since people have been known to switch cards between companies or resubmit cards hoping for a higher grade. There aren’t any recent sales of his card, but similar common cards in an average grade will sell for $200+, so that’s approximately what you could expect to pay for any common player. I know there are people out there who like having type cards from different sets and they will want one from their favorite team. I actually did that for a short time and there are some sets where I only have one card and it’s a Pirates player (Dots Miller is the only card I have from a handful of sets).