If I never stretch my own set rules for this series, then there would be a set produced over many years that I never featured here. The Zee-Nut sets were produced from 1911 through 1938 and they only featured players from the Pacific Coast League. That obviously means that you won’t find anyone pictured with the Pittsburgh Pirates on any of those cards. However, you will find plenty of players who spent time with the Pirates in those 28 years of sets. In fact, some Pirates players can only be found on baseball cards in the Zee-Nut set. Pitcher Elmer Ponder was traded by the Pirates on this date in 1921 during his fourth year with the Pirates. He played during a time when there weren’t many sets being made, and a good percentage of those sets produced during that time only had a limited number of players. Ponder has five cards in the Zee-Nut sets between 1922 and 1928, including today’s Card of the Day from the 1927 set. 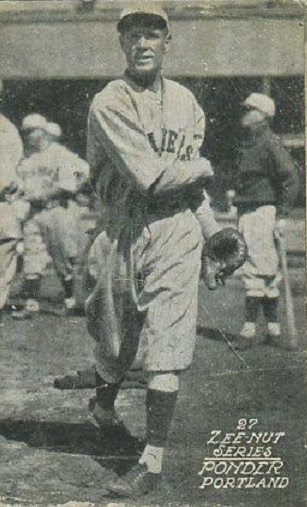 I’m a big fan of the Zee-Nut set when looking for cards of Pirates who don’t have any other options, but they also have some great cards of players who are in other sets, such as Paul and Lloyd Waner, both pictured before they made their big league debut. They also have great black and white action shots, usually taken pregame when they were throwing the ball around or taking some swings in batting practice. Many of the batting poses were staged action photos, but not all of them. The set had borderless photos with the writing in white in the bottom right corner, telling you the year, set, player’s last name and the team name (city only). If you’re lucky, you can find them with a coupon still attached at the bottom (more on this in the pricing section below).

If you’re interested in this particular card, you have one option and it’s on Ebay right now graded as an SGC 40 (equivalent of a PSA 3) for $40 plus shipping. Specific Zee-Nut cards are not easy to find. My suggestion if you just want a Ponder card and that price is not for you, is to not focus on the year and take what you can get from him. There’s a 1925 Ponder Zee-Nut in lower grade (ungraded) for $20 plus shipping. There are three other years available for him, though none are for sale right now. As mentioned above, there were coupons at the bottom of these cards that were meant to be cut off, so they are harder to find with those still attached and those particular “complete” cards demand a premium. You will have a hard time finding a Ponder with a coupon and if you do, I can guarantee that the price will be much higher than either of the two mentioned above.

I’ll note that if you’re searching for these cards you will get more results searching “Zeenut” without the hyphen, but you can clearly see that there’s one on the card pictured above. Most people spell it without the hyphen when writing about the set.